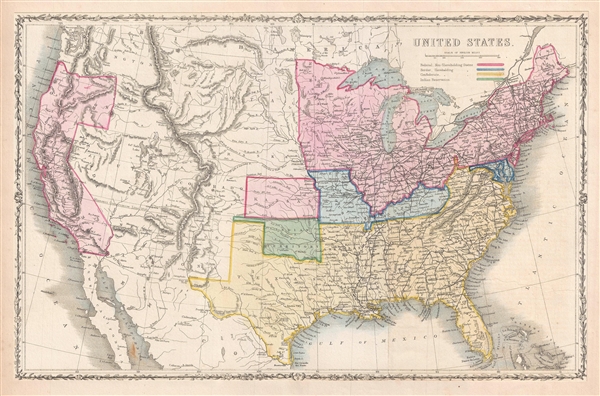 Also of interest is the curious treatment of New Mexico and Arizona. The map includes the briefly extant Confederate Territory of Arizona occupying the southern portion of New Mexico Territory. This interesting territory was declared by the Texan Confederate Col. John Robert Baylor in 1861 and was in theory extant until the end of the Civil War, but in fact recaptured by Union forces scarcely a year later.

A beautiful floral and vine border surrounds the maps. Published by the London Printing and Publishing Company for inclusion in T. P. Shaffner’s The War in America .

Taliaferro Preston Shaffner (1811 – 1881) was an inventor, entrepreneur and publisher. An associate of Samuel Morse, the inventor of the Telegraph, Shaffner published many journals and articles on the subject and held office at several telegraph companies. His passion for invention led him to invent several methods of blasting with high explosives, including nitroglycerine. He was self-educated in law an admitted to the bar and in 1864 served Denmark during the Second Schleswig War. He contributed to recording the history of the United States in his books The War in America, published in 1862 and History of the United States of America: from the Earliest Period to the Present Time, published in 1863. Learn More...

Shaffner, T. P., The War in America: Being an Historical and Political Account of the Southern and Northern States: Showing the Origin and Cause of the Present Secession War. , (London) 1862.