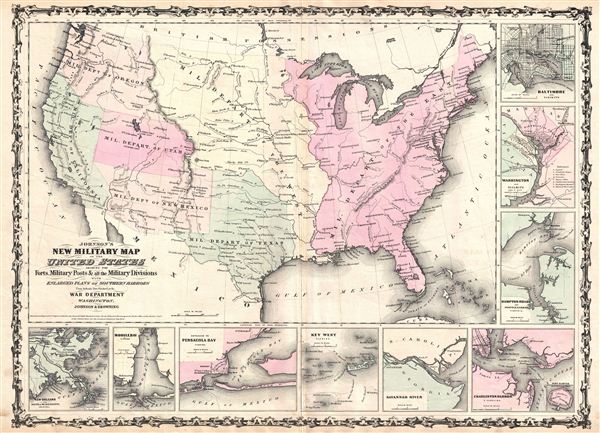 This is one of the most misunderstood of all Johnson maps. Unlike most Johnson maps, this map is a fully independent production and was not inherited from the earlier work of Colton, nor was it included in the first edition (1860) of Johnson's Family Atlas. The map appeared in the second Johnson and Browning edition, 1861; though it is not assigned a page number nor does it appear in the general index of the Atlas. Most likely Johnson ordered this map drawn to capitalize on increased interest in the military deportment of the United States on the eve of the Civil War. In April of the same year this map was published Confederate forces attacked Fort Sumter initiating the hostilities of the American Civil War. Following the American Civil War, the military department system was reorganized with eighteen new military departments replacing the seven shown here.

Features the strapwork style border common to Johnson atlas maps issued between 1860 and 1863. Dated and copyrighted 1861. Issued for the 1861 edition of Johnson's Illustrated Family Atlas.