1862 Johnson Military Map of the United States in Seven Departments 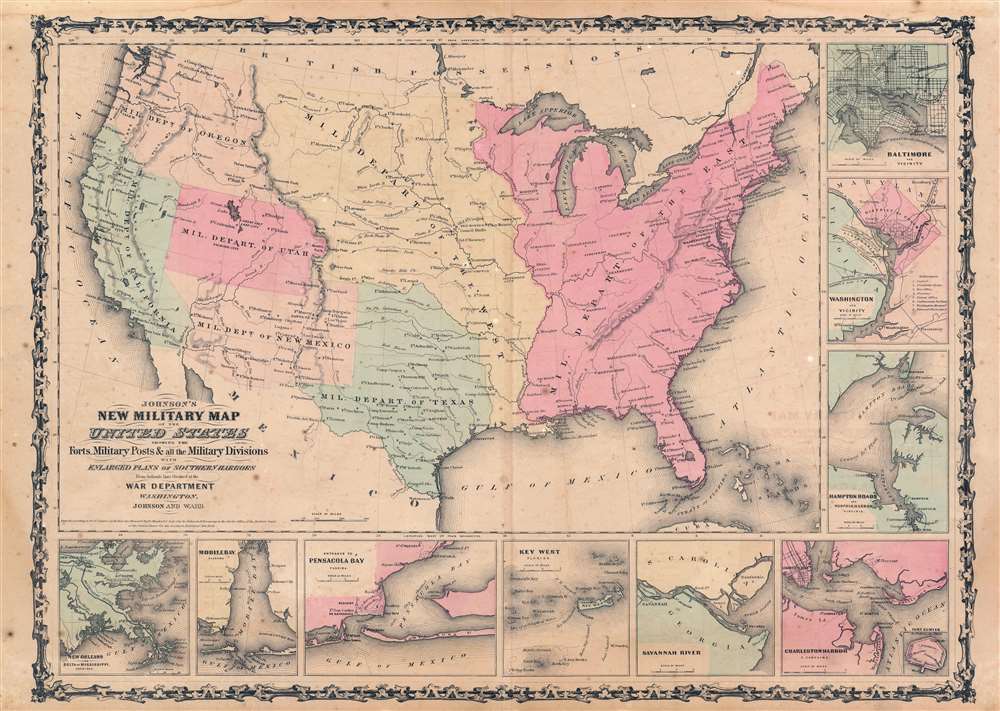 1862 Johnson Military Map of the United States in Seven Departments

The military deportment of the United States at the outbreak of the Civil War.
$400.00

An exceptional example of A. J. Johnson's highly desirable 1862 Military Map of the United States. Created at the outbreak of the American Civil War, this map was issued by Johnson in order to capitalize on the general interest in the War. This is one the two significant variants. This variant, the earlier of the two, shows the U.S. Military Department as of 1861. It offers a wonderful insight into the political situation shortly following the outbreak of the American Civil War (1861 - 1865).

The military districting system in the United States began around 1800, when the country was divided into 11 separately administered military zones. In the early days of westward expansion, these entities were often the only governmental authority patrolling vast regions. Later, as governing infrastructure developed, military district administration often co-existed with civil governments. The U.S. military districts were always somewhat fluid, changing, consolidating, or breaking apart, as required. On October 31, 1853, the division echelon was eliminated and the departments in the east became The Department of the East, administering all territory east of the Mississippi. The 6 western departments consolidated into 4, the Departments of Texas, New Mexico, the West, and the Pacific. The system returned to 6 departments in 1858 when the Department of Utah was created, and the Department of the Pacific split into the Departments of California and Oregon. This is the system represented on the 1861 and some 1862 editions of Johnson's military district maps. With the outbreak of the American Civil War (1861 - 1865), the once unified Military Department of the East became the theater of America's bloodiest war. The old Military Department system was exploded into smaller districts, often conforming to state-based Union armies.

This map was first introduced in the 1861 Johnson and Browning New York edition of Johnson's New Illustrated Family Atlas. Unlike most or the map's in Johnson's atlas, which were derived from Colton's General Atlas, this map is a unique production issued in the midst of escalating tensions between the northern and southern states. There are two major editions of this map and numerous sub-states and variants. The first major edition, the present example, appeared in 1861 and some 1862 atlases, and featured the military department system in effect form 1858 to 1861 - in which there were several large divisions including a large Department of the East. The military department system was revised into a district system with the outbreak of the American Civil War, which exploded the department of the east into numerous smaller districts roughly corresponding to states - that variant appeared in Johnson atlases from 1862 to early 1865. After 1865, the military map was removed from all subsequent editions of the atlas. In total there are 8 states of the map, including minor variations on the two major editions. The present example is the 2nd state, used for part of 1862.

Very good. Exhibits light wear along original centerfold. Exhibits some foxing. Verso repair to centerfold separation. Blank on verso.
Looking for a high-resolution scan of this?