1867 Dripps Map of Central Park and the Upper West Side, New York City 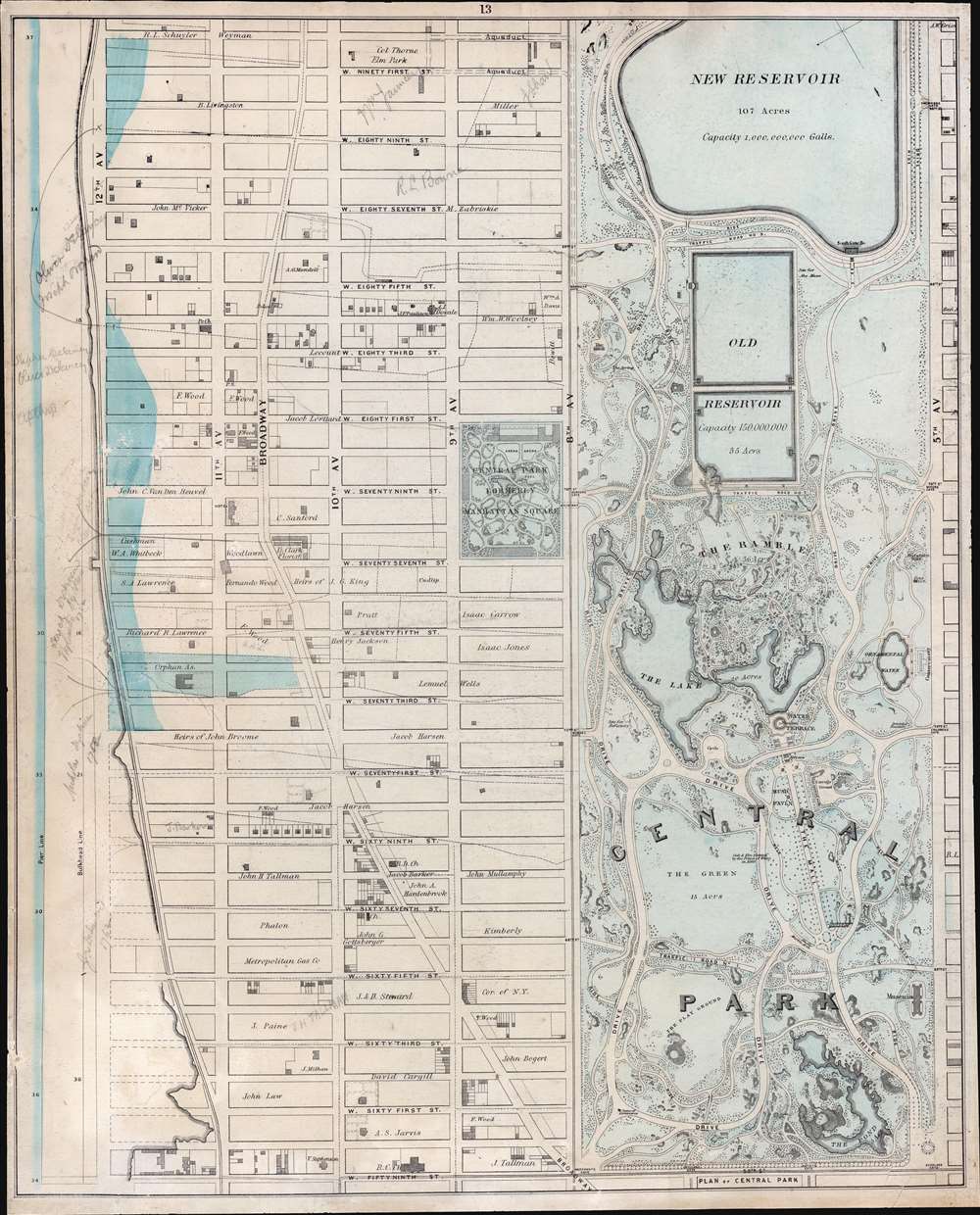 1867 Dripps Map of Central Park and the Upper West Side, New York City

First obtainable map of the Upper West Side.

A scarce map of New York City's Upper West Side, including the southern half of Central Park, issued in 1867 by Matthew Dripps. This is likely the earliest obtainable specific map of the Upper West Side, predating the maps of Egbert Vielé (1868), John Bute Holmes (1874), and Herman Knickerbocker Vielé (1879). Moreover, as the map predates most major development on the Upper West Side, its ichnographic qualities - showing the layout of numerous individual buildings - are of the utmost historical significance. For example, no doubt one of these homes was where Edgar Allen Poe (84th and Broadway) composed The Raven. Coverage extends from West 91st Street to 59th Street and from 5th Avenue to the Hudson River. Cartographically, this map is based upon the 18th century farm surveys of John Randel Jr. (1787 - 1865) and Blackwell, with updates and revisions by the civil engineer John F. Harrison (1824 - 1891).

In the early 19th century most of Manhattan was undeveloped farm lands, the property of wealthy landowners with claims dating to the Dutch period. The northern 2/3rd Manhattan was dotted with farmlands and sprawling gentlemanly estates, many with great manor houses overlooking the Hudson. The Commissioner's Plan of 1811 and the 1807 Commission Law, laid the street grid through many of these properties and gave the city the right to claim these lands under eminent domain, providing due compensation to the landowners. While this work occurred early in lower Manhattan, central and upper Manhattan were not formally acquired by the city until the mid-19th century.

Several enterprising cartographers realized a unique opportunity to make fortunes publishing cartographic data regarding the historical land rights. Among these were John Bute Holmes (1822 - 1887), Matthew Drips (author of the present map), John Randel Jr. (1787 -1865), and others.

UWS: As Remote as the Dakota Territory

When this map was issued, New York was a fast-growing city, but the Upper West Side, the streets for which were planned as early as 1811, was largely uninhabited. Throughout the 1860s and 1870s, Central Park was under construction and the city was involved with the complex project of acquiring the lands north of 14th street from the various estates and heirs. The Commissioners Law granted the city right to the land under eminent domain, but owners were often recalcitrant and unwilling to accept the meager compensation the city was required to provide for land seizures.

The Upper West Side or West End Plateau was initially a hilly high ground called by some the 'Spine of Manhattan.' In the early days of New York, the rocky terrain focused urban development on the more level East Side, where Park Avenue, planned by Vaux and Olmsted, became a nexus of elite social life. While the Upper East Side was being developed, the city leveraged massive resources to uniformly grade the hilly Upper West Side. This work was largely completed by the late 1870s, and real estate development began in earnest in the 1880s. The first major luxury apartment building on the Upper West Side, the Dakota, began being constructed in 1880s and opened its doors in 1884. It was called the Dakota because it was considered as distant from New York society as the 'Dakota Territory.'

This map features a wealth of pencil annotations detailing property ownership - suggesting that this map was put to its intended use by a real estate, insurance, or law firm. Some of New York's most distinguished old family names appear in the manuscript text, among them Apthorp, Delancey, Barker, and Dyckman.

The map illustrates southern Central Park in great detail - exceeding even the Central Park Planning Commission maps that were updated annually. It notes roads, lakes, names areas of the park (The Ramble, for example), planned constructions, a proposed maze, gate names, and even important trees, such as the 'Oak and Elm planted by the Prince of Wales in 1860.'

This extraordinary map reveals southern Central Park as conceived by the landscape architects Calvert Vaux (1824 - 1895) and Frederick Law Olmsted (1822 - 1903). Vaux and Olmsted were awarded the task of designing Central Park in 1853 by the City Common Council. Olmsted's vision drove the overall design while Vaux concentrated his attentions on bridges, buildings, and other structures within the park. The creation of Central Park, which was to consist of some 800 acres of public forest, pathways, promenades, lakes, bridges, and meadows, was a seminal moment in civic urban design. The park itself was designed as a whole, with every tree, pond, and bench meticulously planned. Olmsted wrote: 'Every foot of the Park's surface, every tree and bush, as well as every arch, roadway, and walk has been placed where it is for a purpose.' Today, because of Vaux and Olmsted's efforts, New Yorkers, ourselves included, have the privilege of enjoying what is, perhaps, the finest example of a planned urban public recreation area in the world.

This map was engraved by published by Mathew Dripps at his office on 103 Fulton street for issue in 1867 as plate 13 in his enormous bound Plan of New York City, from the Battery to Spuyten Duyvil Creek. There were two editions, 1867 and 1868, although minimal variation between the individual plates. All examples of this work are exceedingly rare. The New York Public Library owns full issues of both editions, but many of the individual maps, including this one, are in poor condition. The Library of Congress has the exemplar 1867 edition. No market history.