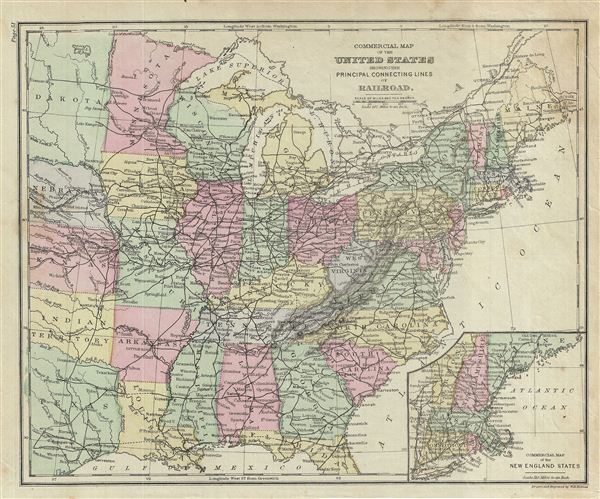 This is an example of David M. Warren's 1879 map of the United States showing its principal connecting railroad lines. It covers the most inhabited parts of the United States from Texas, Kansas, Nebraska and Dakota eastward to the Atlantic. The map includes railroad lines, towns, cities, and notations regarding various American Indian nations. The choice to terminate the map on the eastern slopes of the Rocky Mountains (106th meridian) is suggestive of the fact that this is, in essence, a railroad map and the transcontinental railroad had yet to be completed. An inset map in the lower right quadrant features a commercial map of the New england States. Throughout, the map identifies various railroads, cities, towns, rivers, islands, mountain passes and an assortment of additional topographical details. The map is color coded according to regional and political boundaries with elevation rendered by hachure. Issued as page 51 in the 1879 edition of Warren's Common-School Geography.