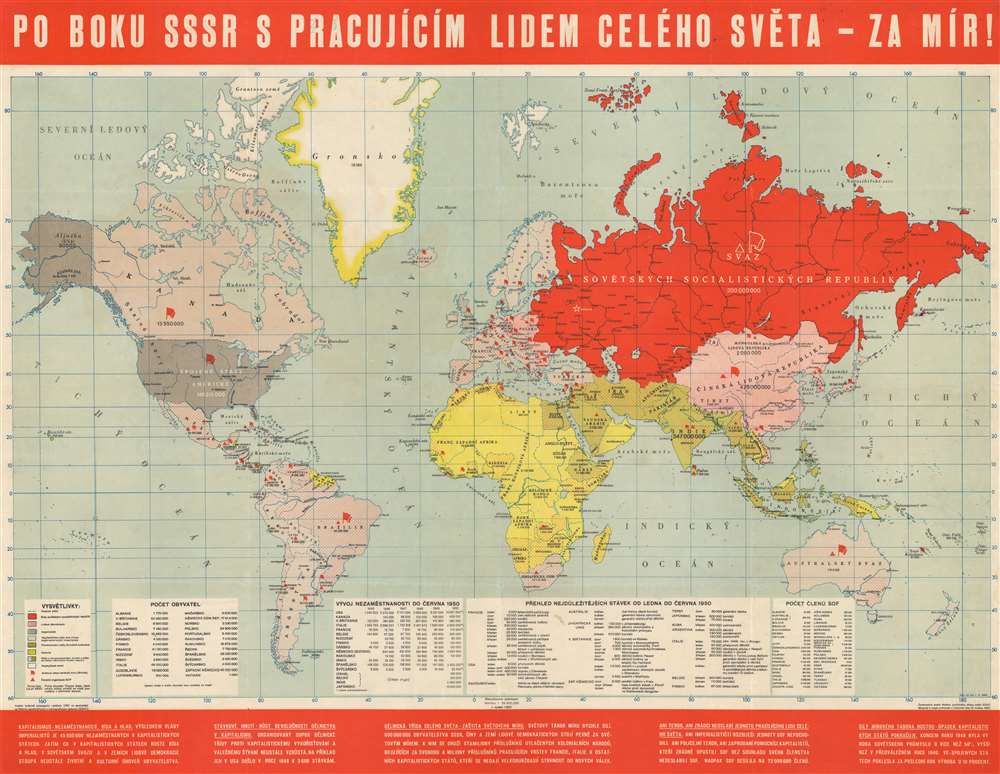 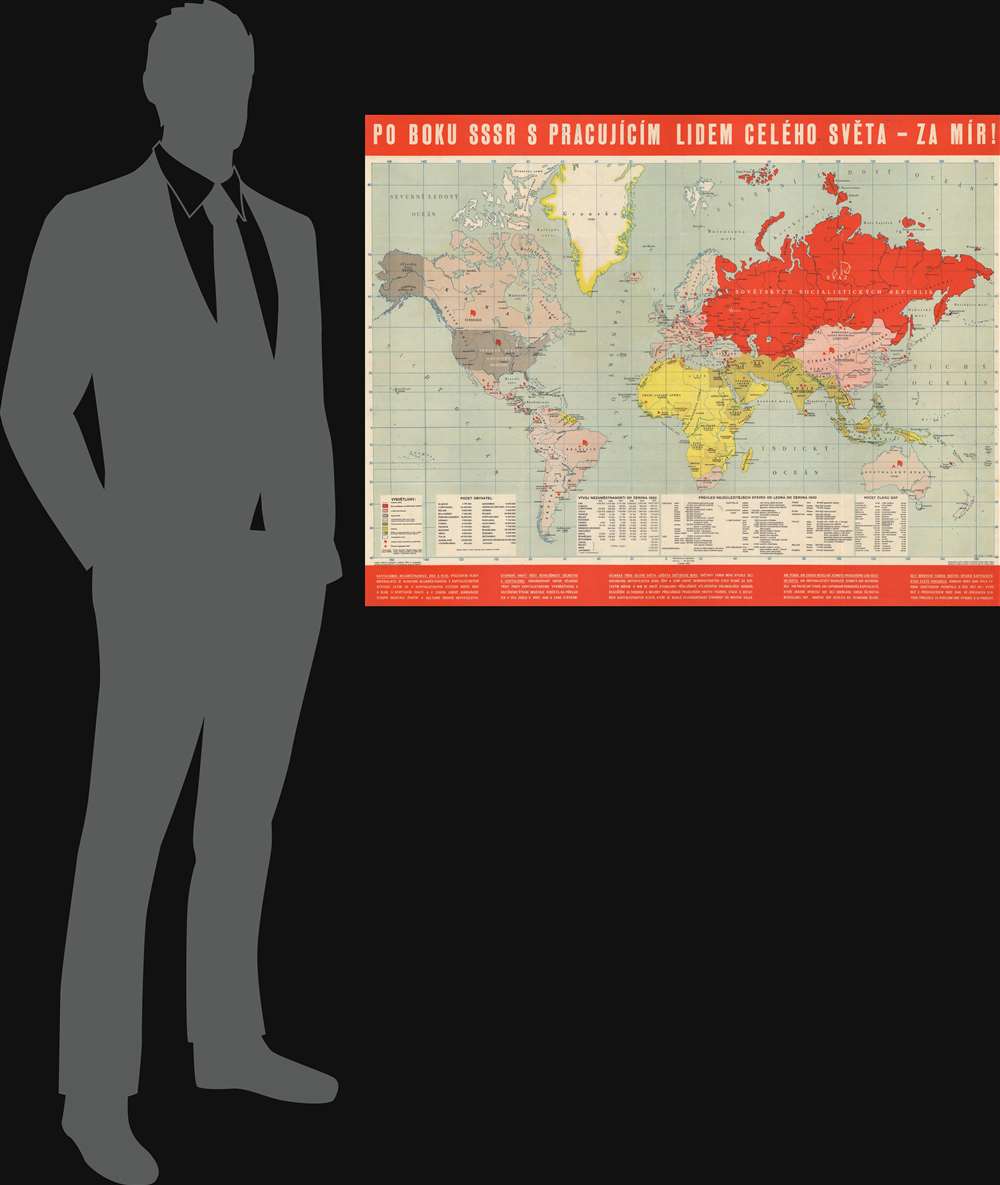 Published by the Cultural Promotion Department of the Central Council of Trade Unions of Czechoslovakia in 1950, this persuasive propaganda map of the world promotes the Communist (and Soviet) narrative that the Soviet Union and its Communist allies stood for world peace while the 'war-minded, imperialistic' capitalist countries, led by the United States, pushed for continued violence and warfare.

With text printed entirely in Czech, the Soviet Union, shaded in red, visually dominates the map. Allied 'People's Democracies' are shaded light pink. Direct adversaries, the United States and the United Kingdom, are dark gray and the 'capitalist states under the influence of Anglo-American imperialists' in light gray. Yellow marks colonies, which stretch worldwide and include Hawaii and Puerto Rico. Countries with a 'liberation movement…and a strong workers' resistance movement' appear with red dots. Flags highlight countries from which delegates to the World Committee for the Defenders of Peace hail, underscoring the Soviet perspective. Tables along the bottom present statistics relating to unemployment, a summary of the most important labor strikes worldwide between January and June 1950 broken down by country, and the number of SOF members by country. Five short paragraphs along the bottom decry the 'unemployment, poverty, and hunger' rampant in imperialist countries, emphasize the abundant prosperity in the USSR and the 'people's democracies', reinforce the striking working classes in 'imperialist countries', and promote the growing influence of the worldwide Soviet peace movement.

Czechoslovakia and the Start of the Cold War

In February 1948, the Communist Party of Czechoslovakia successfully gained complete control of the government of Czechoslovakia. This event shocked the world and had a lasting impact. With the 'fall' of Czechoslovakia, the last remaining democracy in Eastern Europe, the Soviets secured the Soviet bloc and concluded the partition of Europe. It also provided the final impetus toward the creation of West Germany and laid the foundation of a mutual security pact among the Western powers, which would evolve into NATO. The coup also instigated the reinstatement of the draft in the United States and caused widespread public support for the Marshall Plan, which funded the economic recovery of Western Europe.

The Soviet Union established the World Peace Council in 1950 as an organ to promote its foreign policy. Along with other front organization, the World Peace Council and its members promulgated the dichotomy between the 'peace-loving' Soviet Union and the 'warmongering' United States. It was largely funded by the Soviet Union and based in Helsinki from 1968 to 1999, when it moved to Athens, Greece. During the Cold War, the World Peace Council's main activity was organizing international conferences. Attended by thousands, these conferences condemned western military aggression, armaments, and weapons tests. Ironically, they never criticized Soviet aggression. In 1956, for example, the World Peace Council condemned the Suez Crises (1956 - 1957) but said nothing about the Soviet invasion of Hungary (1956). Other examples of blatant include rationalizing the Soviet Union's unilateral resumption of atmospheric nuclear testing in 1961 and its explanation of the 1979 invasion of Afghanistan as an act of solidarity in the face of Chinese and U.S. aggression. These impressive conferences, energetically promoted with heavy propaganda, led to the conflation of peace with Communism, and influenced both eastern and western peace ideology.

This map was published by the Cultural Promotion Department of the Central Council of Trade Unions of Czechoslovakia in cooperation with the State Surveying and Cartographic Institute (SZKÚ) in 1950. It was compiled according to the Small Political Atlas of the World published by the SZKÚ. The only other known example is part of the institutional collection at the Olomouc Research Library in Olomouc, Czech Republic.

The Central Council of Trade Unions (1945 - 1952) (ÚRO) (Czech : Ústřední rada odborů) was a unified trade union in Czechoslovakia originally founded in the late stages of the Nazi occupation as part of the resistance. The Czech National Council authorized the Central Council of Trade Unions to take over all trade unions and property on May 6, 1945, which was confirmed by the Ministry of the Interior on May 19, 1945. The Proclamation of the Central Council of the Trade Unions was published on May 15, 1945, a day after ÚRO leaders met with Prime Minister Zdeněk Fierlinger to discuss the roles of the trade unions in the newly reestablished republic. The ÚRO supported the Communist Party during the February 1948 coup. The ÚRO governed the Revolutionary Trade Union Movement after its establishment in 1946 and was recognized as the supreme body of health insurance in 1951. The ÚRO voted itself out of existence in July 1952, when guidance of individual trade unions was divided among government ministries. Learn More...

Olomouc Research Library V 175.822.
Looking for a high-resolution scan of this?