1936 Tryon Map of United States and its Overseas Possessions 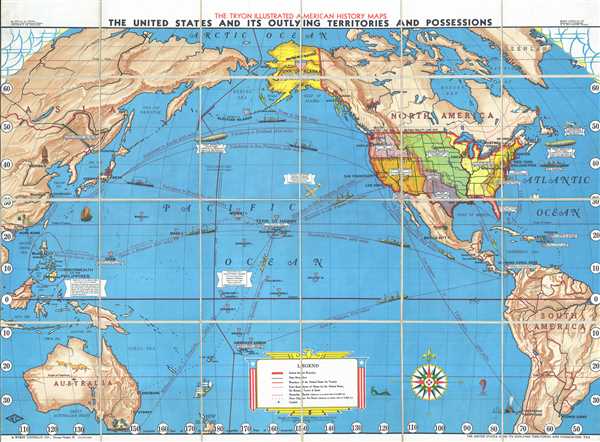 1936 Tryon Map of United States and its Overseas Possessions

Illustrates innovations in long-distance flight, including Lindbergh's flight from New York to Paris!

This is a 1936 Rolla M. Tryon map of the Americas and the Pacific Ocean chronicling advancements in long distance travel. The map depicts from Asia to North and South America and from the Arctic Ocean to Australia and South America. Along the East Coast of the United States, three innovations in long-distance travel between the late 1920s and mid-1930s are illustrated, beginning with Charles Lindbergh's flight from New York to Paris non-stop across the Atlantic in the Spirit of St. Louis. Lindbergh's flight was essentially a contest sponsored by a French-born New York Hotelier, Raymond Orteig, as way to encourage a transatlantic flight between New York and Paris. Lindbergh left Roosevelt Field on Long Island for Paris on May 20, 1927 and arrived 33.5 hours later at Le Bourget Airport north of Paris. He was celebrated as a hero and received unprecedented adulation following the success of this flight.

Below the Spirit of St. Louis, the 'Graf Zeppelin' and its flight around the world are celebrated. From August 8-28, 1929 the 'Graf Zeppelin', a German-built and –operated hydrogen-filled airship, went 'Round-the-World', beginning and ending at Lakehurst Naval Air Station in New Jersey. The entire voyage occurred at the behest of William Randolph Hearst, the media mogul, whose empire was the major commercial backer of the adventure. Four Hearst staffers were among the nine passengers who made the entire voyage. In all, flight time lasted 12 days, 12 hours, and 12 minutes, while the entire circumnavigation lasted 21 days, 5 hours, and 31 minutes covering 20, 651 miles.

The third innovator for long-distance travel is the SS Leviathan, an ocean liner which crossed the Atlantic regularly from 1914 until 1934. One of three sister ships built for Germany's Hamburg America Line, she was originally named the Vaterland and was larger than her sister, the Imperator. She had only made a handful of voyages when she arrived in New York in late July 1914, the outbreak of World War I. She was kept in the Hoboken, New Jersey terminal until she was seized by the United States Shipping Board in 1917. She served in the U.S. Navy as the USS Leviathan until October 1919, having ferried hundreds of thousands of American soldiers to fight in Europe and back home again. After the war, she was refurbished and again served as a passenger liner for U.S. Lines, although she never earned any money.

In the Pacific, the 'Graf Zeppelin' appears once more, on its way to completing the first-ever non-stop flight of any kind across the Pacific Ocean. The Trans-Siberian Railway is labeled. The China Clipper is also illustrated, appearing near Hawaii. This Martin M-130 flying boat (one of the largest planes of its time), owned by Pan American Airways, inaugurated the first commercial transpacific airmail service in 1935. It flew from Alameda, California to Manila, in the Philippines, via Honolulu, Hawaii, Midway Island, Wake Island, and Guam, all American territories. Also commemorated is the flight of the Southern Cross, flown by Sir Charles Kingsford Smith, Charles Ulm, Harry Lyon, and James Warner, in the first trans-Pacific flight from the mainland United States to Australia in 1928.

Apart from these innovations in long distance travel, numerous other important events are noted. The Wright Brothers' flight at Kitty Hawk, North Carolina, is labeled, with a depiction of the Wright Flyer. Also, the history of the expansion of the United States is easily distinguished, based on the different notes and shading in the continental U.S, from the original thirteen colonies, to the Louisiana Purchase, to the Gadsen Purchase. The outlying territories and possessions of the United States (i.e. their empire) is also evident. American overseas holdings are labeled with red, white, and blue shields, from the Virgin Islands and Puerto Rico in the Caribbean to the Panama Canal Zone to the nearly dozen islands in the Central and South Pacific. The Philippines, however, are labeled as the 'Commonwealth of the Philippines'. Declared on November 15, 1935, and guaranteed complete independence from the United States in 1945.

Throughout the rest of the map, world capitals and other important cities are labeled. Beijing (Peiping) is labeled, although not as the capital of China which was Nanjing (Nanking), along with Shanghai, Macau, and Hong Kong. Melbourne, Sydney, and Brisbane are labeled in Australia, with a vignette of three kangaroos occupying the interior of the continent. Several Central American capitals are labeled, including Mexico City, San Salvador, and San Jose. Shipping routes crisscross the Pacific, with the cities they connect and the distances between them labeled, along with illustrations of cargo ships. A decorative title cartouche, situated at the bottom center, in the style of American patriotism, with an eagle on top, explains the various different notations used.

This map was created by Rolla M. Tryon and published by the Weber Costello Company of Chicago Heights, Illinois.

Rolla M. (Milton) Tryon (1875 - 1954) was a professor of American history and education at the University of Chicago. Little is known about Tryon, although records for two of his publications were located. They were entitled Household manufactures in the United States, 1640 - 1860: a study in industrial history and The teaching of history in junior and senior high schools. Learn More...

Very good. Dissected and mounted on linen in 24 panels. Blank on verso.