1866 Mitchell Map of Utah and Nevada 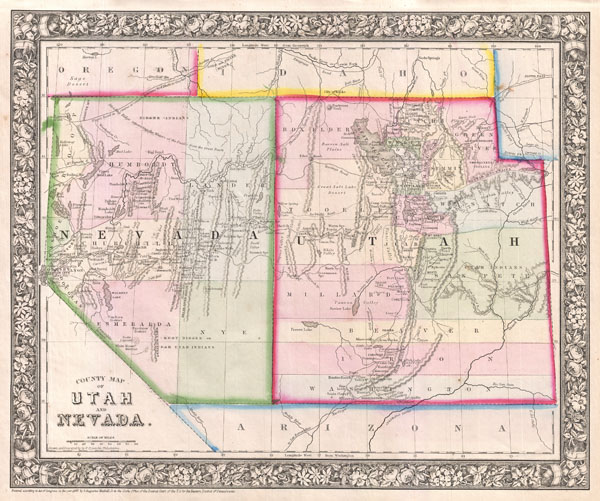 1866 Mitchell Map of Utah and Nevada

Ephemeral mapping of Nevada and Utah.

A beautiful example of S. A. Mitchell Junior's 1866 map of Utah and Nevada. Covers both the state of Nevada and the Territory of Utah. Highly detailed with notations on proposed railroads, topographical features, springs and cities. Identifies a number of important east-west routes including the Overland Mail Route, the Telegraph Route, Beckwith's Route, the Hastings Road' and the Emigrant Road to California, the Wagon Road to Owyhee Mines, and others. Notates mineral deposits of gold and silver just across the border in Idaho, as well as Salt Beds in Nevada and Utah. Color coded at the county level One of the most interesting and ephemeral maps of this transitional region to appear in the mid 19th century. Surrounded by the attractive floral border common to Mitchell atlases between 1860 and 1866. This map was prepared late in the production of Mitchell's atlas and is identified in the index as plate number 43 1/2, though is itself unnumbered. Prepared by W. H. Gamble for inclusion in the 1866 issue of Mitchell's New General Atlas. Like many American map publishers of this period, though he did update his maps, Mitchell did not update his copyrights, consequently this map is dated and copyrighted to 1865: 'Entered according to Act of Congress in the Year 1865 by S. Augustus Mitchell Jr. in the Clerk's Office of the District Court of the U.S. for the Eastern District of Pennsylvania.'