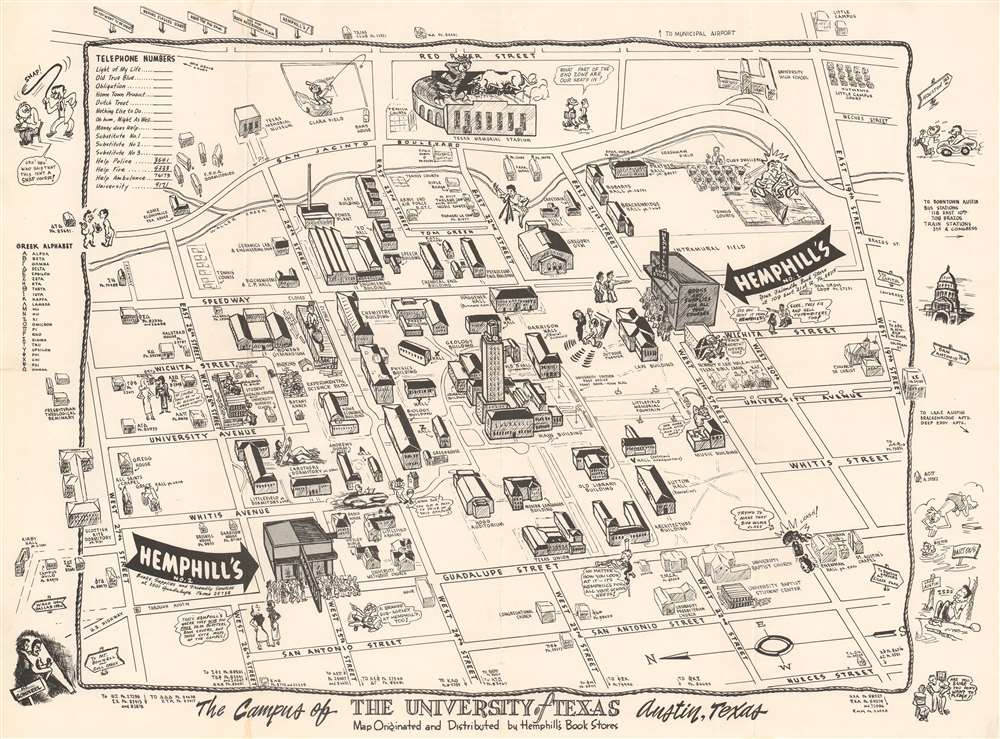 A charming pictorial map of the University of Texas promoting Hemphill's Book Stores.
$1,250.00

This is a c. 1945 Hemphill Book Stores pictorial map of the University of Texas at Austin campus. Two large arrows with block lettering highlight the two Hemphill's Book Stores near campus and large crowds of people are illustrated milling out in front of the stores. Buildings all across campus are illustrated and labeled, including the newly constructed outdoor theater next to the law building. Coeds are illustrated sunbathing outside Carothers and Littlefield Dormitories, and students late to class unfortunately get into a car accident at the corner of Guadalupe and West 21st Street. Numerous fraternities and sororities are identified by their Greek letters and their phone numbers are given. Most of the dormitories also have a phone number listed. We must not forget to mention the inclusion of Texas Memorial Stadium near the top border, where a Longhorn (the mascot of the University of Texas) is running off a Texas A and M Aggie. Two conveniences are provided for the students along the left border. The first is a place to write in important telephone numbers, with the top blank labeled as the 'Light of My Life' and the university's number provided at the bottom of the list. The second is a very helpful key to the Greek alphabet, which must have been useful to love-struck students trying to reconnect with a Greek they met at a party the night before.

What's an advertisement without advertising?

Since this map was 'originated and distributed by Hemphill's Book Stores', it would be surprising if there wasn't some self-promotion involved. Other than clearly marking the location of the two closest Hemphill's locations, the artist employs vignettes to highlight services provided by the bookstores. Two women, standing in front of Hemphill's No. 2 in the lower left corner of the map, promote Hemphill's by stating 'That's Hemphill's where they give you free desk blotters, book covers, and those cute maps of the campus!'. Two other people, drawn outside the Hemphill's on the other side of campus, promote their policy of selling, renting, and fixing typewriters. There's also a series of signs along Red River Street, set up much like signs along highways lauding the fantastic pie at a roadside diner, that read, 'If you want to be smart / before classes start / avoid the big jam / use our Book Reservation Plan / Hemphill's!'.

This map was created and published by Hemphill's Book Stores c. 1945. This map is not catalogued in the OCLC and we are aware of only one other instance when it has been offered on the private market.

Theron Joseph Taylor 'T.J.' Hemphill (October 9, 1902 - March 23, 1955) owned an operated a chain of bookstores in Austin, Texas. Born on a farm near Era, Cooke County, Texas, Hemphill attended Oak Cliff High School in Dallas before entering Southern Methodist University (SMU). He only attended SMU for one year, before entering the University of Texas in Austin, where he eventually earned a Master's degree in Business Administration. He opened the first Hemphill's Book Store in 1933 across from the University of Texas Law Building, and at the time of his death owned four bookstores around Austin. Over the course of the subsequent twenty-plus years, Hemphill became popular among students at the University of Texas and could count friends across the state and the southwest. Hemphill acquired the Texas Book Store, one of his main competitors, in August 1953. He married his wife Gensie with whom he had one daughter, named Holly. Genie owned and operated Hemphill's Book Stores until at least 1964, and references to the store appear as late as 1978. Learn More...

Very good. Verso repair to fold separation. Even overall toning. Blank on verso.
Looking for a high-resolution scan of this?