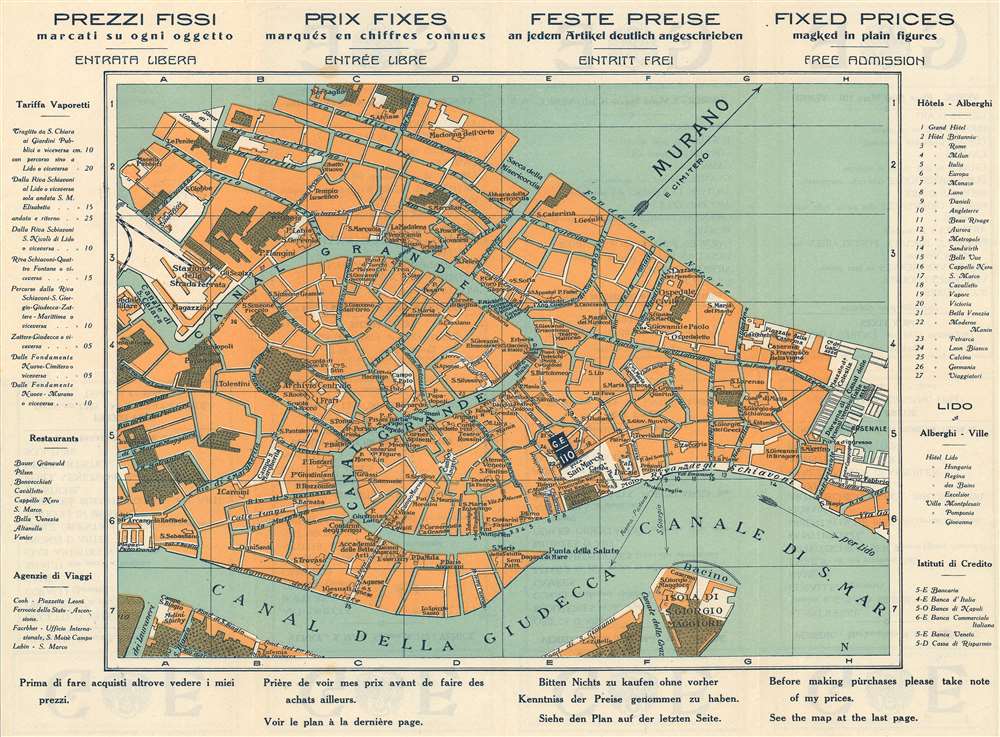 A charming city map of Venice.

Created as a promotional piece for Graziadei's gallery 'Grande Eszosizione' situated and St. Marc's Square, this is a c. 1914 Ernesto Graziadei city map or plan of Venice, Italy. The map depicts the city from the Santa Lucia train station to the Canal de le Galeazze and from the Rio di San Alvise to the Canal della Guidecca. Numerous locations throughout the city are labeled, including St. Marc's Square, several parks, the Rialto Bridge, and, of course, Graziadei's gallery. Many of the city's celebrated canals are identified, including the Grand Canal. Information about restaurants, travel agents, hotels, and banks is included along the left and right sides, while advertisements for the gallery appear in Italian, French, German, and English along the top and bottom.

This map was published c. 1914 by Ernesto Graziadei.

Ernesto Graziadei (fl. c. 1890 - 1920) was an Italian artist and photographer based in Venice. Graziadei created glass works as well as photographs and opened a gallery space on St. Marc's Square in Venice to sell artwork. He was involved in founding Pauly and C. in 1902 which them merged with the Compangia di Venezia e Murano after both companies were purchased in 1919. They were then resold under the name that they trade under today, which is Pauly and C. - Compagnia Venezia Murano.

Very good. Even overall toning. Light wear along original fold lines. Text on verso in four languages. Attached to original binder.
Looking for a high-resolution scan of this?