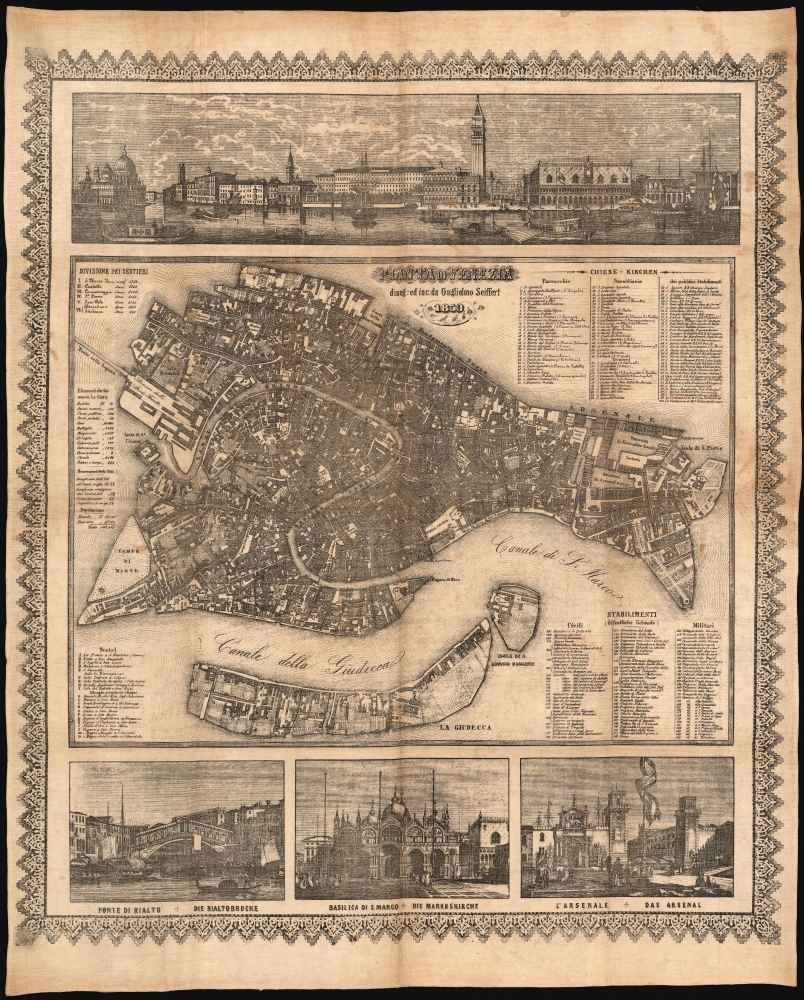 This is an elegant and scarce 1859 city map of Venice, lithographed on linen by Willem Sieffert. The plan includes a key naming 185 specific structures including churches, official, and military buildings. A separate letter key locates nine of Venice's theaters, and twelve of the city's hotels and baths. Tables to the left enumerate city districts, the elements and dimensions of the city, and the population - broken down between men and women. The plan is accompanied with a panoramic view focused on St. Mark's Square, and views of the Rialto Bridge, the Basilica of St. Mark, and the Arsenal.

Maps and plans printed to cloth, such as this, were fashionable souvenirs in the 19th century, both as gifts in their own right as well as being useful as a handy map and for gift wrapping. The presence on Seiffert's legends of bilingual titles - Italian and German - suggests the intended audience for this object was German travelers. Seiffert's other known output was also printed in Italy (Padua and Venice, mainly) so we are puzzled with the tendency of many cataloguers to place the publisher of this plan in Germany. In composition, the plan itself and its detailed key appear to be derived from Venice publisher Giuseppe Kier's Pianta della R. Citta di Venezia. The views at top and bottom may be derived from those engraved by Marco Moro and published by Kier in 1846, under the title Venezia monumentale pittoresca.

The plan first appeared in print in 1850, with editions dated 1851, 1859 (the present example), 1864, and 1875. Each edition exhibited changes to the border the typography of the title and the composition of the letter key, and sufficient changes to the image to suggest that the lithographic image may have been reworked completely. Only a 1864 edition appears in OCLC, catalogued in the collection of the Staatsbibliothek Zu Berlin.

Willem (Wilhelm, Guglielmo) Seiffert (fl. 1850-1866) was a German-born mapmaker and draftsman working in Italy in the mid-19th century. We know virtually nothing about this mapmaker, apart from several publishers with whom he partnered: Pellegrini in Torino, Prosperini in Padua, and the printers Kier and Fontana in Venice. In addition to a map of the Lagoon of Venice, and plans of Venice, Verona, and Belluno, he also appears to have produced an 1855 Italian manual of calligraphy. It is probable that he numbers among the many German printers and mapmakers who fled Germany after the 1848 revolution; while many of these made their way to the United States, it is not unlikely that some would have been able to establish themselves elsewhere in Europe. Learn More...

Very good. Minor soiling and discoloration at folds, else excellent with no mends.

This edition not in OCLC.