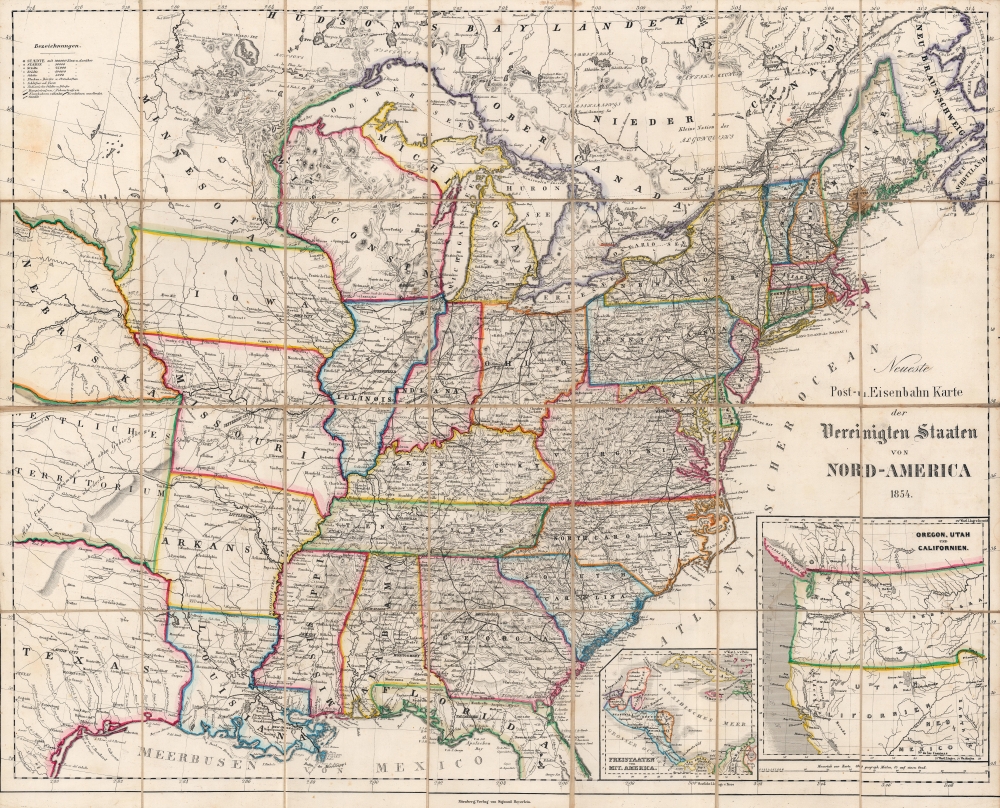 A finely colored and engraved 1854 German-language folding map of the United States, based on maps by Calvin Smith, Henry Tanner, and others, published in Nuremberg by Sigmund Beyerlein. It reflects interest in the U.S. at a time when German Forty-Eighter immigration surged, driven by the California Gold Rush and the failure of the Springtime of the Peoples Revolutions of 1848.

The main map covers the eastern half of the United States and the most populated areas of Canada. Individual states are outlined in striking hand-color to easily distinguish their borders. Considerable detail is provided on cities, railroads, mountains, and waterways.

An important aspect of this map is the inset maps of Central America and the western half of the U.S. at bottom-right. As this map was published in the wake of the California Gold Rush, which attracted many German immigrants, the San Francisco Bay area would be of special interest to viewers. Understandably, there is some confusion over the rapidly changing geography of California; Sacramento is too far to the west, near today's Bodega Bay, while Benicia is misspelled as 'Renizia.' Benicia was one of the first towns to develop in the wake of the gold rush and served as the capital of California for much of 1853 and the early part of 1854, exactly when this map was produced.

In Central America, Chiapas and Yucatan are not indicated as part of Mexico, reflecting contention over their status throughout the 19th century. The future states of Columbia and Panama are both noted as part of 'Neu Granada' but are outlined in different colors, reflecting their uncertain status at this time. In 1851, a civil war had broken out that, much like the later U.S. Civil War, revolved around the question of slavery. One consequence of the war and another civil war between 1860 - 1862 was the drastic reduction of central power and a move towards a federal system, though Panama would not become fully independent until 1921, largely as a result of the Panama Canal.

The town of New Helvetia, labeled here to the right of Sacramento City, was founded by Swiss pioneer John Sutter (1803 - 1880) in Upper California in August 1839. Industries were established, including a distillery, hat factory, and tannery, alongside several agricultural endeavors. But it would be the discovery of gold by James W. Marshall at Sutter's Mill in 1848 that would forever cement New Helvetia in the history books. The gold rush caused all Sutter's workers to abandon their jobs in the hope of finding their fortune in the gold fields and the sudden influx of fortune-seekers caused Sutter to close all his businesses. Squatters occupied his land and by 1852 Sutter was bankrupt.

Germans were an important contingent of immigrants to California during the gold rush. Not only was the possibility of striking it rich a 'pull' factor, but the failed Revolutions of 1848 in German lands were also a 'push' factor that led to a wave of political refugees arriving in the United States at the same time. In addition to well-known figures like Sutter (a Swiss citizen born in Germany) and Levi Strauss, other entrepreneurs like Frederick A. Hihn, Henry Villard, Claus Spreckels, and Adolph Sutro (later Mayor of San Francisco) prospered by investing in railways, land, and other opportunities in the American West. Much of the middle classes of San Francisco and Sacramento were composed of German immigrants who arrived in the wake of the gold rush.

This map was published by Sigmund Beyerlein in Nuremberg in 1854, and is based on maps by Calvin Smith, Henry Tanner, and others (who are often listed as authors in catalog listings, in part because some editions of the map credit them explicitly in a note at top). Very little information is available about Sigmund Beyerlein. Other editions of this map were distributed by other publishers, most often the Buchnerschen Buchhandlung in Bamberg. Editions of this map, sometimes with slightly different titles, exist from throughout the 1850s, with variations among insets and other minor differences from year to year. We are unable to locate any other examples of the 1854 edition in institutional collections or on the market.

Very good. Areas of discoloration at upper-left below the legend and at upper-right-most fold intersection. Dissected and laid on linen backing.