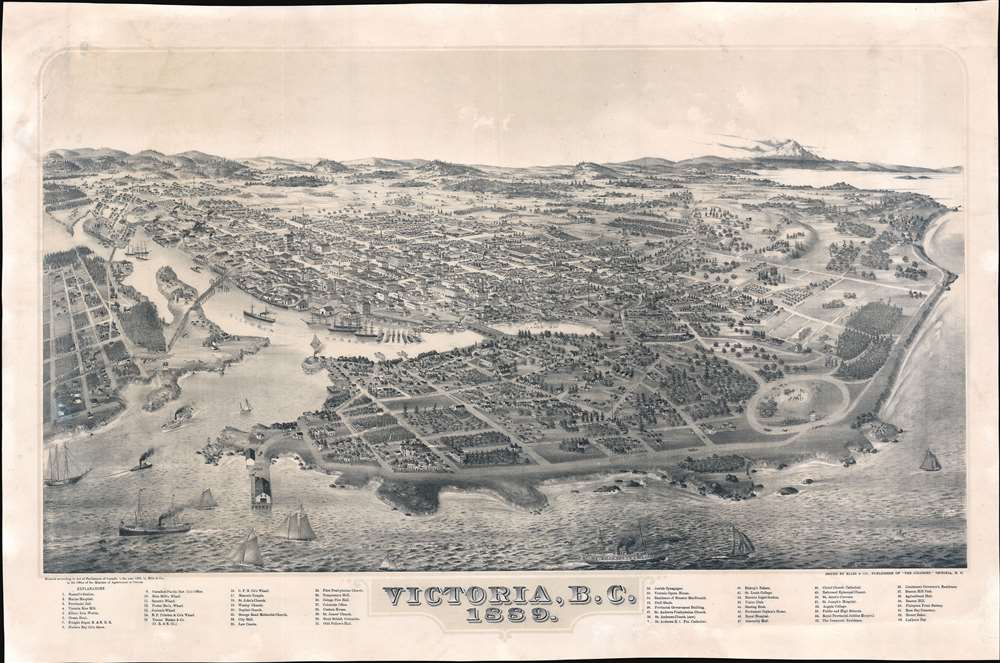 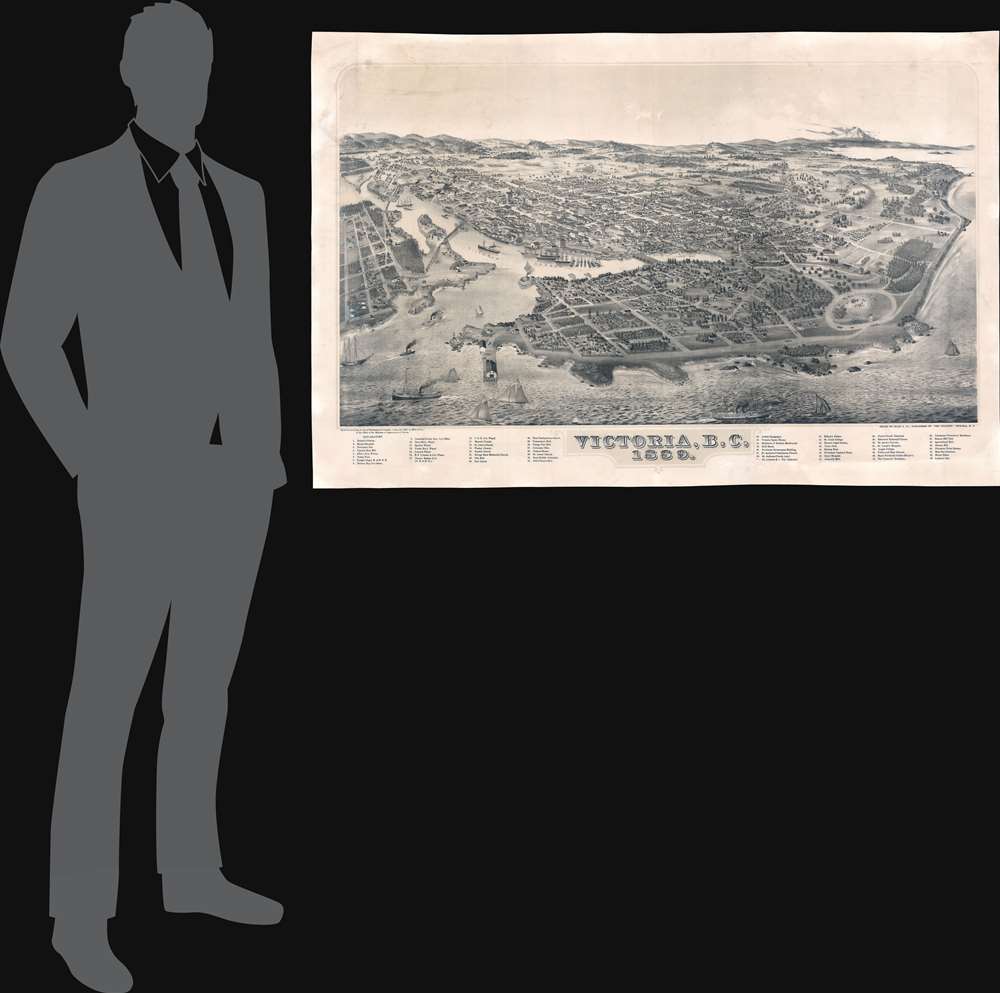 A fine two-color chromolithograph bird's-eye view of Victoria, British Columbia, Canada, published by Ellis and Co., owner of the local Victoria newspaper, The Colonist. The view looks northeast on Victoria from a highpoint above the Strait of Juan de Fuca. When this map was made, Victoria was entering a period of rapid growth and expansion, leading to a high degree of civic pride and 'presumably' a market for this magnificent view - by far the largest 19th century view of the city.

The perspective centers focus on the James Bay district, a peninsula to the south of the harbor - an area at the time lotted out, but still largely undeveloped, as this image attests. We imagine that the viewmakers may have been encouraged to highlight this area by real-estate developers. By the 1890s, James Bay had developed into an elite enclave, the home of Cariboo Gold Rush millionaire William J. Pendray (1846 - 1913), lumber magnate William James Macaulay (1828 - 1902), and politician William John Macdonald (1832 - 1916) (Macdonald Park). Today James Bay remains a popular affluent community and the city’s oldest neighborhood, known for its lively waterfront and charming Victorian houses.

The artist is a mysteries 'R. H.', singed in the lower left corner. We do not know who R.H. might be. He also produced d a view of Placerville, California for the Weekly Observer in 1888, Sacramento for the Daily Record-Union and Weekly Union c. 1900, and an 1890 View of Redding (Shasta), 1889, among others. He appears to have worked extensively for Wallace William Elliott firm (fl. c. 1870 - c. 1890). Many of Elliott's viewmakers signed only by initials. Other initials on Elliott's more than 50 views include 'T.S.' and 'F.W'. View historian John William Reps speculates that these may be lithographers and that Elliott himself was the artist. The present view is the only known view signed by R. H. that was not published by Elliot. As view making was a very specialized form of artistry, it is not surprising that Ellis would bring in a specialist from California to prepare his great view of Victoria, but it also suggests Reps may be incorrect, as someone had to have drawn this.

The tradition of the bird's-eye city view emerged in the United States and Canada in the middle part of the 19th century and coincided with the commercial development of lithographic printing. While before the rise of lithography, the ability to own and display artwork in the home was largely limited to the extremely wealthy, lithographic printing made it possible for everyone to own visually striking artwork. A robust trade developed in portraits of political leaders, allegorical and religious images, and city views.

Lithograph city views were being produced as early as the 1830s, but the genre exploded after the American Civil War (1861 - 1865). Bridging the gap between maps and pictures, most 19th century American Bird's-eye views presented cities to the public high vantage points. Some were imagined, but others were drawn from hot-air balloons or nearby hills. The presentation, combining high elevation, commercial interest, and new printing technology created a uniquely American art form, as described by historian Donald Karshan,

The vogue for bird's-eye city views lasted from about 1845 to 1920, during which period some 2,400 cities were thus portrayed, some multiple times. Although views were produced in many urban centers, the nexus of view production in the United States was Milwaukee, Wisconsin. The major viewmakers were Stoner, Wellge, Bailey, Fowler, Hill, Ruger, Koch, Burleigh, Norris, and Morse, among others.

The view was drawn by R.H. an unknown California artist, and published in Victoria by William H. Ellis in 1889. It is rare. Reps notes 8 known examples, 4 in Canada, 4 in the United States.

William Harrington Ellis (October 31, 1859 - February 28, 1921) was a Canadian businessman and newspaper publisher based in Victoria, British Columbia. He was born in Port Hope, Ontario, where he grew up and apprenticed as a printer. He lived briefly in Winnipeg before settling in Victoria, British Columbia, in 1884. He immediately took a position with the local newspaper, The Colonist. Around 1886, Ellis partnered with Albert George Sargison (1862 - 1929) and W. R. Higgins to purchase The Colonist from the estate of David William Higgins (1834 - 1886). The colonist operated under the umbrella of Ellis and Co., which also published broadsides, books, guides, and views. In 1892, The Colonist was sold to James Dunsmuir (1851 - 1920). Ellis went on to invest heavily in real estate. He was married to Ada Leslie Withrow. Learn More...