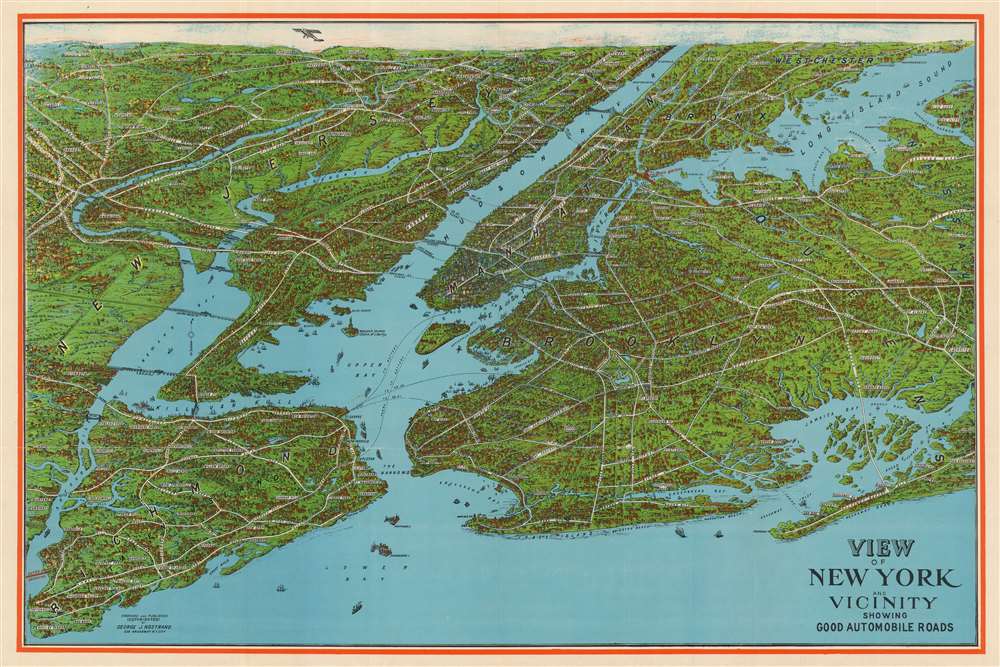 This is an engaging birds-eye view map of New York City and vicinity by George J. Nostrand. Initially printed in 1928, this is a later, and apparently scarcer edition printed between 1929 and 1936 featuring several material changes, including most notably the addition of the Triboro Bridge. Brightly colored and evocative, the view presents New York City and its surrounds at the height of 'the Roaring Twenties.' As the title suggests, it was meant to highlight the most auto-friendly of New York City’s roads during an era in which the automobile was still a relative novelty and the outer boroughs not yet fully developed. Ferry routes are prominently shown, and the East River is spanned by the Brooklyn, Manhattan, Williamsburg and Queensboro Bridges. All five New York City Boroughs are represented, and the map encompasses Westchester County, Bergen County and Nassau County in Long Island. In addition to major roads, the map details specific neighborhoods, the character of their development and topography beautifully rendered. Individual landmarks, buildings and bridges are illustrated throughout, including the Statue of Liberty, Ellis Island, Grand Central, Madison Square Garden, Museum of Natural History, and Metropolitan Museum of Art. The harbor is full of ships while an airplane - in fact, Charles Lindbergh's Spirit of St. Louis - soars over Paterson. We find this state of the map to have been printed more boldly and colorfully than earlier iterations, with a bright red border and a richer blue utilized throughout the image.

Updating the Map to the Thirties

While the bulk of this view adheres to the 1928 edition's information, there are several significant changes. For example, the yet-unnamed George Washington Bridge is no longer marked 'Proposed' as it had been on the earlier state of the print; not only this, but also the ferries upstream of the GWB have been removed, perhaps as an effect of the opening of that bridge. (The lack of a name for the bridge may indicate a printing date prior to 1931.) As with the 1928 issue, The Goethals Bridge, constructed between 1925 and 1928, is also unnamed and marked 'proposed.'

Notably, printed in red, the sprawling Triboro Bridge has been added to Hell Gate, and it is named; it is not indicated that it is proposed. That bridge system would open officially in 1936, but it is not at all clear how that dates this piece. The first proposal for the bridge had been made in 1920; funding was made available to the project in 1925, but construction was halting. The groundbreaking ceremony for the beginning of the bridge did not take place until October 25, 1929 - the day after Black Thursday (This uncertainty about the project may have been why no indication of the planned bridge appeared on the 1928 edition of Nostrand's view.)

The Triboro as shown lacks any connection to actual roads; these, which would eventually become part of the Brooklyn-Queens Expressway, would be constructed between 1930 and 1936. Their absence here may indicate that the view was produced prior to their inception, perhaps as early as 1929. or it may be that their inclusion would run counter to the view's stated object, 'showing Good Automobile Roads.'

This map appears to be based on an earlier 1902 map by August R. Ohman, whose office was in the same building as Nostrand until 1925. This particular view was copyrighted, engraved and published by George J. Nostrand, whose shop was a few blocks north of the Woolworth Building, from whose observation deck this map was sold. OCLC shows two examples of the 1928 state and three of a further 1929 state in institutional collections. We see no examples of this 'Triboro Bridge' state of the view catalogued, and we have not seen this state identified on the market prior to this one.

George J. Nostrand (fl. 1920-30) was an American lithographer and publisher of maps and views, primarily of New York City. He appears to have been in the employ of the Arthur Ohman Map Co. until the firm’s closing in 1925. Thereafter he operated from the same location under his own name as late as 1939. Learn More...

Very good. Few marginal mends; some mends at junctures of folds with virtually no loss. A bold, colorful example.