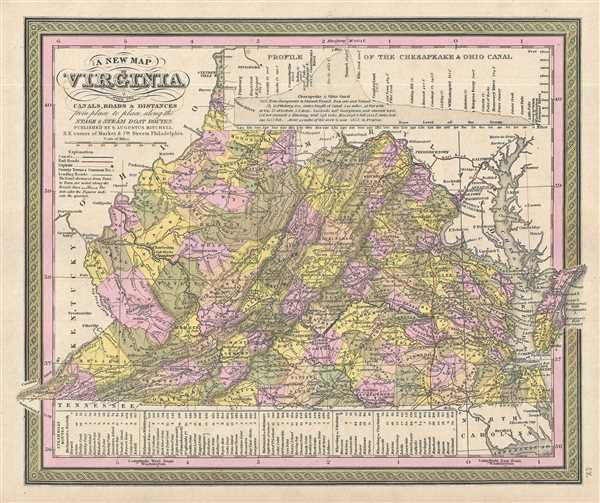 Map of Virginia predating its separating into West Virginia and Virginia.

This is a lovely 1849 map of Virginia, including West Virginia, by the legendary American map publisher Samuel Augustus Mitchell. This hand colored lithographic map predates the 1862 separation of Virginia and West Virginia, and so contains both modern states in full as well as parts of adjacent Kentucky, Ohio, Maryland, and North Carolina. A list in the map's lowers left quadrant shows various steamboat routes, along with mileage.

The Chesapeake Bay in particular, in rendered in full while a profile in the upper right details the elevations of the important Chesapeake and Ohio Canal. Operated until 1924, the Canal, which paralleled the Potomac connected the Atlantic to the Ohio River, and was a vital artery for trade between the populous Atlantic coast and the rapidly developing American interior.