1781 Bellin Map of the Chesapeake Bay and Surrounding States 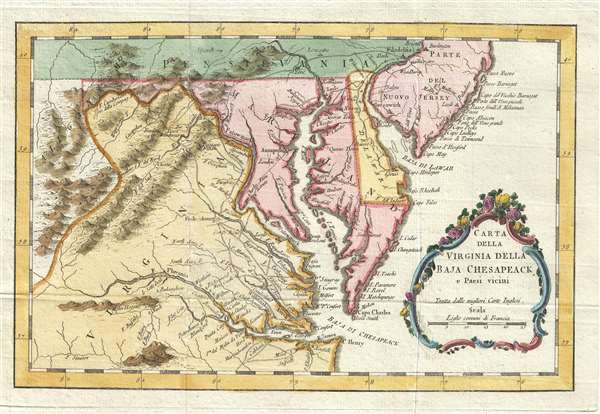 1781 Bellin Map of the Chesapeake Bay and Surrounding States

This is a rare 1781 Italian edition of French cartographer Jacques-Nicholas Bellin’s 1757 map of the Chesapeake Bay including Virginia, Maryland, Delaware and parts of New Jersey and Pennsylvania. Bellin's map covers from Cape Henry north to the Susquehanna River and Burlington, New Jersey and inland as far as the Appalachian Mountains. The Chesapeake Bay is shown in full, as are many of its river estuaries. The map notably includes the Chesapeake Bay's western watershed, luring potential colonists with the promise of large navigable rivers and rich fertile lands.

Bellin prepared this map for issue in the 1757 French edition of Provost's Histoire Generale des Voyages. The present example is the first edition, identifiable by the right hand pointing to a note just below the title cartouche. There were five editions of this map as well as several variant states.