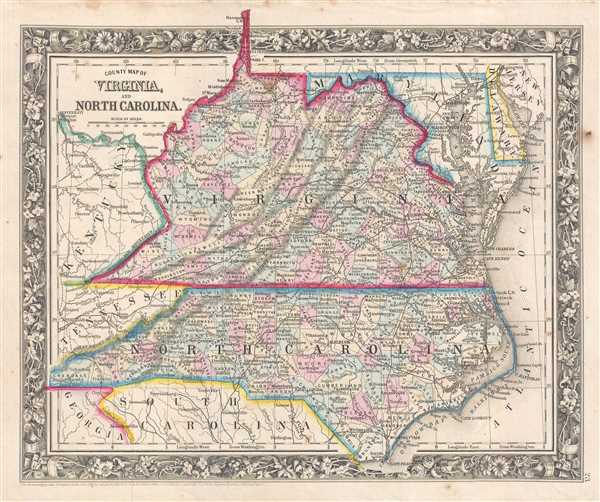 The Orange and Alexandria Railroad is labeled - a railroad between Washington, D.C. and Richmond that would play a crucial role during the oncoming American Civil War.

This is an 1861 Samuel Augustus Mitchell, Jr. map of a unified Virginia with North Carolina, the seat of the Confederacy on the eve of the American Civil War. The map depicts the region from Kentucky, Tennessee, and Georgia to the Atlantic Ocean and from Virginia and Maryland to Georgia, South Carolina, and Cape Fear, North Carolina. Railroads throughout the region are illustrated, through few are labeled. The Orange and Alexandria Railroad is labeled; a railroad that played a critical role during the American Civil War by providing the only direct rail link between the Union capital at Washington, D.C. and the capital of the Confederacy at Richmond. Thus, it was fought over several times throughout the war and saw several battles, including the First Battle of Bull Run, the Battle of Manassas Station Operations, and the Second Battle of Bull Run. Other labeled railroads include the North Western Virginia Railroad and the Baltimore and Ohio Railroad. The Chesapeake and Ohio Canal and the James River Canal are also illustrated and labeled.

Highly detailed, individual counties are illustrated, labeled, and shaded different colors to allow for easy differentiation. Cities, towns, and villages throughout the two states are labeled, along with Washington, D.C., Dover, Annapolis, Knoxville, Wilmington, and other towns in the surrounding states. Rivers are illustrated as well, though only a small portion of them are labeled, along with both the Chesapeake Bay and Delaware Bay.