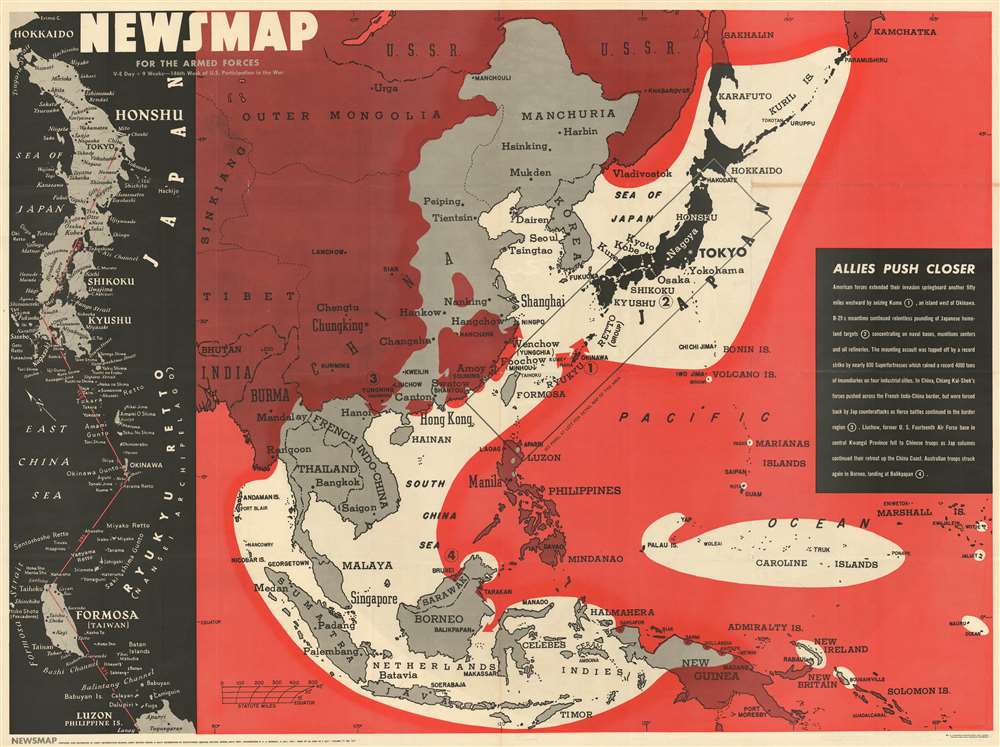 Strikingly illustrates Allied gains in the Pacific and the tightening Allied grip around Japan.
$550.00

This is a visually striking 1945 'Army Information Branch Newsmap' map of East Asia. The map depicts the region from western China to the Marshall Islands and from the Soviet Union to New Guinea and the Solomon Islands. Allied Territory is shaded red and highlights the constant pressure being put on Japanese gotvrd. The Japanese home islands, colored black, are at the center of a constantly shrinking sphere. A textbox situated along the right border highlights four actions by the Allies as they 'push closer' to Tokyo. Some are territorial moves, such as the invasion of Kume, the Australian landing at Balikpapan on Borneo, and offensives by Chiang Kai-shek's Chinese nationalists in French Indochina and along the Chinese coast. The last of the four is an abhorrent strategic move: the firebombing of four Japanese cities by American B-29 Superfortresses.

The Firebombing of Japan

History has done an incredible job of remembering the atomic bombings of Hiroshima and Nagasaki, with good reason. While these tragedies warrant remembrance, popular memory has largely forgotten that the Japanese suffered devastating bombing attacks by the U.S. Army Air Forces well before Hiroshima and Nagasaki. In early March 1945, American commanders began firebombing Japanese cities with napalm. On the night of March 9, 1945, the American napalm firebombing campaign against Japan began. More than 270 B-29s rained fire on the Japanese capital, dropping over 1,600 tons of bombs. The raid destroyed sixteen square miles of downtown Tokyo, killed an estimated 100,000 civilians, and left over one million people homeless. After a month of strategic bombings in support of the invasion of Okinawa, the firebombing campaign against Japan's other biggest cities commenced in earnest in mid-April and continued through June. In those two months, the Army Air Force destroyed Japan's six largest cities, killed between 112,000 and 127,000 people, and left millions homeless. Incendiary raids against small Japanese cities began in mid-June and continued through the end of the war in August. These raids on small cities could effectively wipe them off the map.

This map was created by the U.S. Army's Information Branch and distributed to army and navy posts in the United States in early July 1945 to help with training. Eight examples are catalogued in the OCLC and are part of the institutional collections at Denison University, Ohio Wesleyan University, Davidson College, the Library of Michigan, Southern Illinois University at Edwardsville, the University of Missouri – Columbia, Wichita State University, and the Denver Public Library.