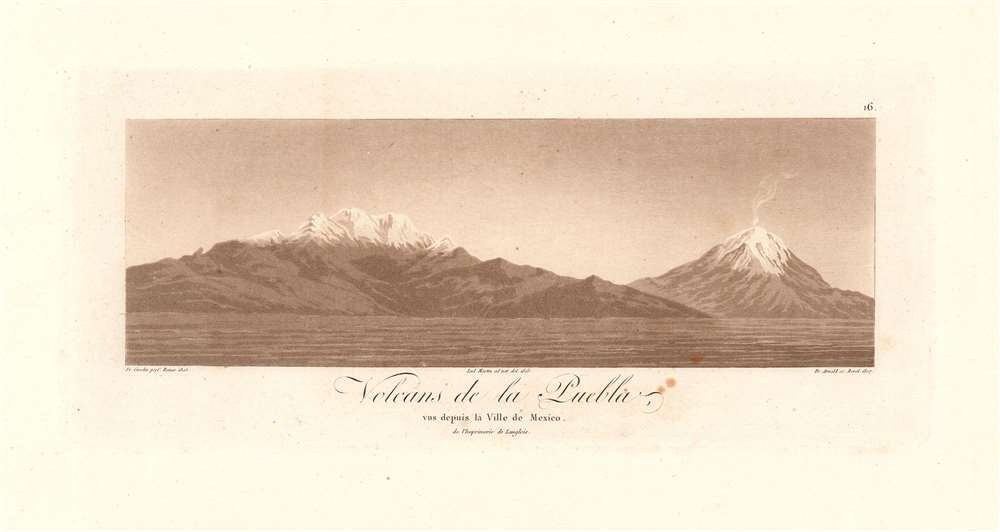 This scarce 1811 aquatint presents an attractive and quite recognizable view of the mountains of Iztaccihuatl and Popocatepetl, the enormous Mexican volcanoes between Mexico City and Puebla, seen here from the north. The view would have been one the great scientist and explorer would have seen during his 1804 journey between Mexico and Veracruz. The aquatint was based on a drawing by Lud Martin in 1803; the engraving credits the artist as having drawn it from life, and it shows every sign of having been so executed: including the wisps of smoke rising from Popocatepetl's summit. Sadly, about the artist Martin - likely, Don Louis Martin, credited for work on several of Humboldt's maps - the historical record is silent.

The right-hand mountain depicted is named Popocatéptl, a Nahuatl name literally meaning ’Smoking Mountain.’ It is one of Mexico’s most active volcanoes, with more than fifteen major eruptions since the 16th century. At the time this view was drawn, the most recent eruption had been just one year prior in 1802; the next eruption would not be until 1919. The volcano's current activity began with an eruption in November 2019, which has continued into 2020.

The left-hand mountain shown, 'Iztaccíhuatl' (Nahuatl for ‘White woman,’ so-called for the resemblance of its four snowy peaks to the profile of a sleeping woman) is, like 'El Popo' a volcano; appropriately, Iztaccíhuatl is dormant.

This plate appeared in the 1811 edition of Humboldt's Atlas Géographique et Physique du royaume de La Nouvelle Espagne, which OCLC shows in perhaps a dozen examples in institutional collections. The book appears on the market from time to time. The individual plate does not appear in price or auction records.