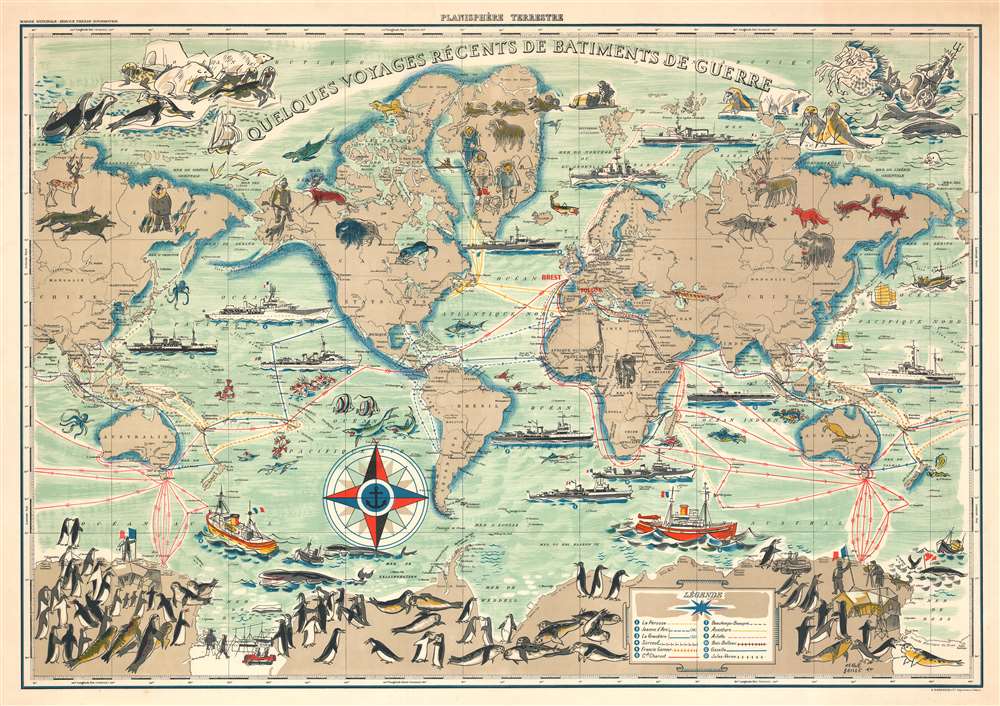 This is a 1950 Hervé Baille pictorial map of the world tracing voyages by French warships. The map depicts the word on a Mercator Projection centered on the Atlantic. Fancifully illustrated, cartoonish animals, including penguins, seals, walruses, whales, and polar bears, draw the viewer's attention, as do illustrations of a bison and an otter in North America, a giraffe and an elephant in Africa, a kangaroo in Australia, and wolves and a yak in Asia. Sharks and several different species of marine life populate the seas.

The routes of twelve French warships are traced: the La Pérouse, the Jeanne d'Arc, the La Grandière, the Surcouf, the Francis Garnier, the Commandant Charcot, the Beautemp-Beaupré, the Aventure, the Ailette, the Bois-Belleau, the Gazelle, and the Jules Verne. A key situated in the lower right quadrant identifies all twelve, assigns each ship a number, and provides the viewer with the symbol used to identify the voyage(s). Each of the twelve ships is also illustrated on the map with a corresponding number. In the course of our research we have been able to find information concerning nine of the vessels, but have been unable to trace the Ailette, the Commandant Charcot, and the Gazelle.

Perhaps the most intriguing of this dozen ships is the Bois-Belleau. Commissioned as the USS Belleau Wood in March 1943, Belleau Wood served in the Pacific during World War II and took part in the invasion of the Gilbert Island, the landings on the Kwajalein and Majuro Atolls, the invasion of the Marshall Islands, the landings at Hollandia, New Guinea, the invasion of Saipan, and the Battle of the Philippine Sea. Aircraft from the Belleau Wood sank the Japanese carrier Hiyō during the Battle of the Philippine Sea. Belleau Wood ended the war with the 3rd Fleet and took part in the final strikes on the Japanese home islands. She was decommissioned on January 13, 1947 and was put in reserve. She received the Presidential Unit Citation and 12 battle stars for her service during World War II. After spending five years in reserve, the Belleau Wood was transferred to the French Navy on September 5, 1953 under the Mutual Defense Assistance Act. For her service in the French Navy she was christened the Bois-Belleau. The Bois-Belleau left Toulon in April 1954 for French Indochina to relieve the Arromanches. She arrived on May 20 where she, along with several other U.S. built fighters and bombers, were used against the Viet Minh. After the Geneva Conventions were signed in July, the Bois-Belleau returned to France and took part in the Algerian War. She was returned to the United States in September 1960, where she was stricken from the Navy List and scrapped on October 1, 1960.

The Francis Garnier began life as the Eritrea a colonial ship in the Italian Regia Marina (Royal Navy). She served in the East African Campaign during World War II before sailing for the Indian Ocean and Kobe, Japan. After Japan declared war in December 1941, Eritrea was used to assist 'transport submarines' until September 1943, when, after hearing of the Italian armistice, she sailed at full speed for Ceylon to surrender. After the war, Eritrea was turned over to the French and renamed the Francis Garnier. She was used in colonial service until 1965 when she became a target ship during a nuclear test in the Pacific Ocean in 1966.

The Rest of the Fleet

In regards to the rest of the ships, much less detailed information has been found. The Lapérouse, for example, was a French unarmored barbette cruiser and the lead ship of her class. The Surcouf was a French destroyer first launched in October 1953 and sank in 1971 following a collision with a Soviet tanker. The Jeanne d'Arc was a French training cruiser who operated during the Second World War and eventually joined the Free French forces. She was retired in 1964. The La Grandière was a French aviso that operated in the colonies and was scrapped in 1959. The Beautemps-Beaupré was a former aviation tender that was turned into an escort ship after World War II. Shew as eventually turned into a hydrographic vessel. The Jules Verne was a submarine tender and the Aventure was a frigate.

How We Dated This Map

In order to date this map, we used the histories of the warships depicted in order to narrow down the date. Due to the presence of the Bois-Belleau, we know that this map must have been created in 1954, since the Belleau Wood was not transferred to the French Navy until 1953 and did not sail for French Indochina until 1954.

This map was created by Hervé Baille, printed by G. Barbarie and Cie., and published by the Marine Nationale (French Navy) in 1954. This map does not appear in the OCLC or any other institutional collections and is rare on the private market.

Frédéric Marie Joseph Hervé Baille (January 21, 1896 - June 3, 1974) was a French artist and engraver. Born in Sète, Baille became an important figure in the French scomic art community and held exhibitions of his work throughout Europe. Baille created advertisements and other work for Air France beginning in 1940 and was named Peintre de la Marine in 1947.

Good. Closed margin tears, extending up to 1.5 inches, professionally repaired on verso. Blank on verso.
Looking for a high-resolution scan of this?