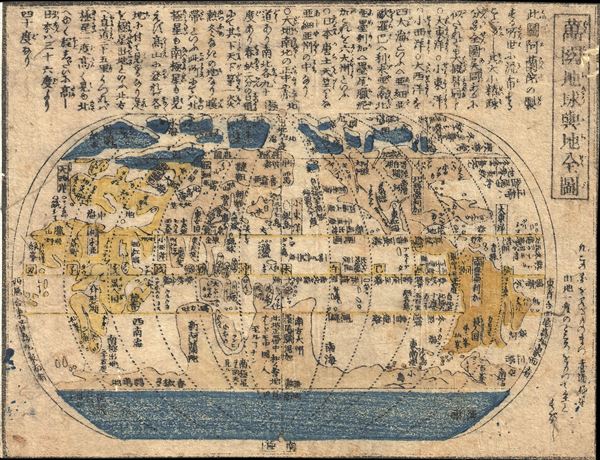 Miniature Japanese Map of the world based on Matteo Ricci.

A miniature 18th century xylograph (woodcut) Japanese map of the world. This small map follows the model of the Chinese issued 1602 Matteo Ricci map - then the most sophisticated European style world map available to Japanese cartographers. The map embraces the entire world on the iconic Matteo Ricci pseudocylindrical projection. The map is centered on Japan, or more accurately the Pacific, with America appearing on the right side and Asia-Africa-Europe on the left. The central meridian runs directly through another unknown southern continent which represents a proto-Australia. Continents are vaguely recognizable but have a hard to interpret globular form - doubtless an offshoot of the challenging xylographic medium combined with the reduced form of the piece as a whole. The map appears to be undated, but follows in the style of the middle-Edo period, c. 1750.

Very good. Margins trimeed to neatline.
Looking for a high-resolution scan of this?