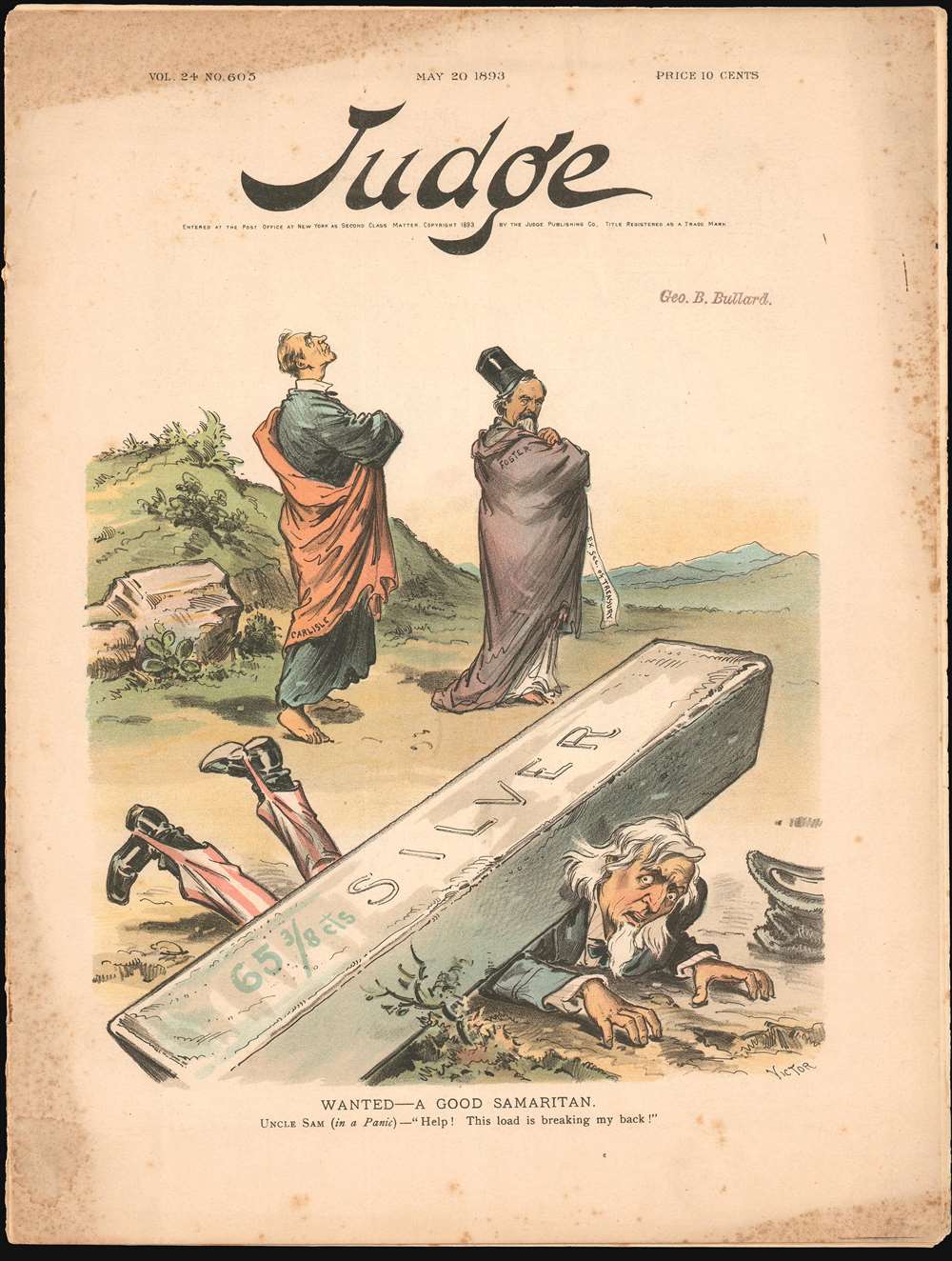 Inspired by the biblical 'Parable of the Good Samaritan,' this 1893 Victor Gillam political cartoon eviscerates the U.S. Treasury for ignoring what many believed to be the cause then-rampaging Panic of 1893: Free Silver.

Two Secretaries of the Treasury, Charles Foster and John G. Carlisle, appear in the roles of the priest and the Levite who, in the parable, ignore a beaten man. Here, Foster and Carlisle ignore Uncle Sam, the personification of the United States, as an enormous silver bar 'breaks his back.' Many, including Carlisle and President Grover Cleveland, reviled the Sherman Silver Purchase Act, which forced the U.S. Treasury to buy excess silver, thus artificially deflating the values of both silver and gold. It also allowed for the exchange silver certificates for gold, leading to a depletion of America's gold reserve. The Cleveland Administration's response was to lobby Congress to repeal, but this took months. Meanwhile, unemployment skyrocketed, hitting twenty-five percent in Pennsylvania, thirty-five percent in New York, and forty-three percent in Michigan, with national unemployment estimated at somewhere between seventeen and nineteen percent. Fifteen thousand businesses closed, five hundred banks failed, and an unknown number of farms ceased to exist. Thousands of people became homeless when they were unable to pay their mortgages and communities organized soup kitchens to feed the hungry.

One of the causes of the Panic can be traced to foreign entities investing in Argentina, which had been encouraged by Baring Brothers, an Argentine bank. This era of plenty came to an end after the wheat crop failure in 1890 and a coup in Buenos Aires. Cautious investors moved to hoarding gold instead of paper money. The drive to exchange paper money for gold, in turn, led to bank runs, further deepening the financial panic.

This cartoon was drawn by Victor Gillam and was published on the cover of the May 20, 1893 edition of Judge.

Gillam, V. 'Wanted - A Good Samaritan.' Judge Vol. 24 No. 605, May 20, 1893. (New York: Judge Publishing Company).     Judge (1881 - 1947) was a weekly satirical magazine published in the United States. The first issue was first printed on October 29, 1881 and was only sixteen pages long. Judge was launched by James Albert Wales, Frank Tousey, and George H. Jessop, who had previously worked for its rival magazine Puck. In the mid-1880s, William J. Arkell purchased the magazine, which was having difficulty competing with Puck. Arkell, taking advantage of his considerable wealth, persuaded cartoonists Eugene Zimmermann and Bernhard Gillam to leave Puck and join the staff at Judge. As Arkell was a supporter of the Republican Party, Judge soon became a platform for criticizing the Democratic administration of Grover Cleveland, which was blamed for the Panic of 1893, among other issues. With support from the Republican Party, Judge saw a rise in popularity during the 1880s and 90s, surpassing Puck in both content and circulation. Judge also widely supported the candidacy of William McKinley, largely through the work of cartoonists Victor Gillam and Grant E. Hamilton. Judge reached its peak circulation of around 100,000 by 1912. One of its former editors, Harold Ross, used his experience at the magazine to launch his own publication, The New Yorker in 1925, which quickly began to compete with Judge. Due to the success of The New Yorker and the Great Depression, Judge became a monthly is 1932 and ceased circulation in 1947.

Good. Exhibits foxing and wear along edges that does not effect printed image. Text on verso.
Looking for a high-resolution scan of this?