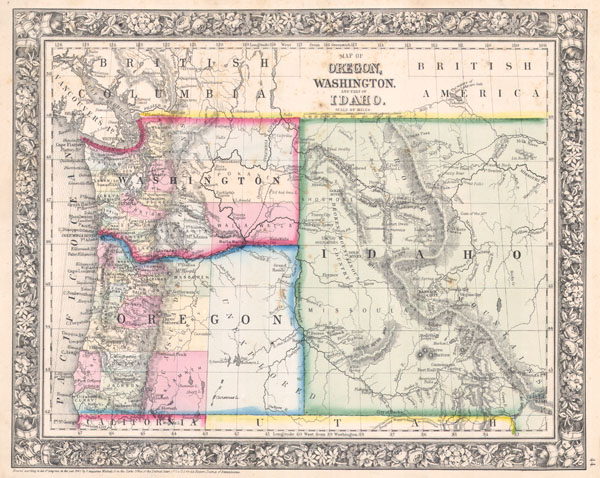 A beautiful example of S. A. Mitchell Jr.'s 1864 map of Washington, Oregon and Idaho, with parts of modern day Montana and Wyoming . Washington and Oregon and depicted with defined counties only in the western sector, with the eastern portion of the states largely Unexplored. The newly formed territory of Idaho is depicted including modern day Montana and Wyoming. Notes unexplored regions, geographical features, explorers notes and American Indian Nations. Following the Gold Rush settlers flooded into this region seeking a new life in the American west. Shows the Emigrant Trail, or as it is now known, the Oregon Trail. One of the most interesting and ephemeral maps of this transitional region to appear in the mid 19th century. Features the floral border typical of Mitchell maps from the 1860-65 period. Prepared by S. A. Mitchell for inclusion as plate 44 in the 1864 issue of Mitchell's New General Atlas. Dated and copyrighted, 'Entered according to Act of Congress in the Year 1860 by S. Augustus Mitchell Jr. in the Clerk's Office of the District Court of the U.S. for the Eastern District of Pennsylvania.'