1966 Detroit News Map of Vietnam during the American Vietnam War 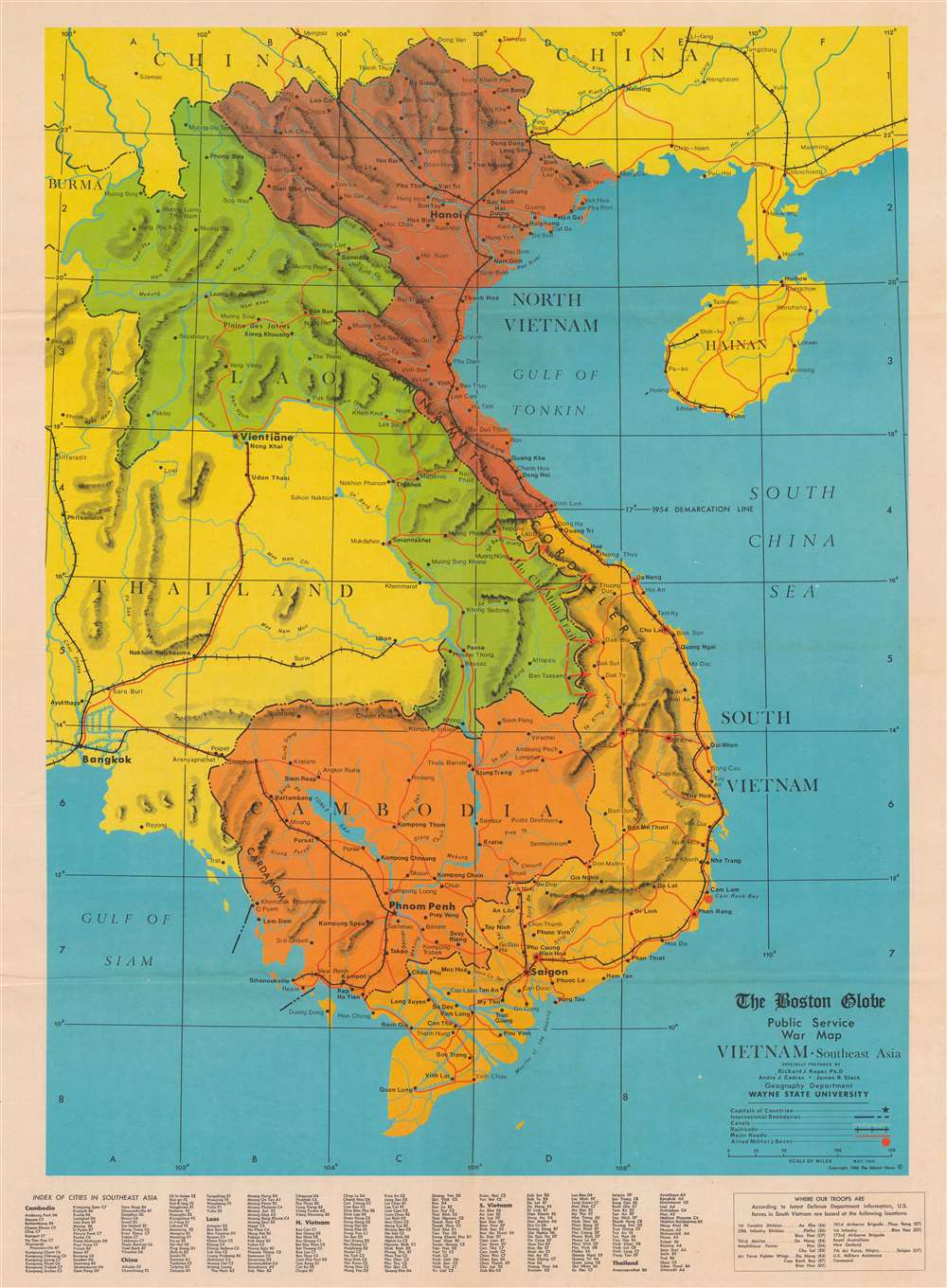 1966 Detroit News Map of Vietnam during the American Vietnam War

Largest newspaper map of its kind - a unique reference to the Vietnam War.
$1,000.00

This is a 1966 Detroit News and Boston Globe map of Southeast Asia published during the Vietnam War (1955 - 1975). This map represents the largest of its kind published by an American newspaper up to that point. Depicting from southern China to the Ca Mau Peninsula and from the Thailand to the South China Sea, the map is an invaluable geographic resource for contextualizing the Vietnam conflict. Cities and towns throughout North Vietnam, South Vietnam, Laos, and Cambodia, along with those in included parts of Thailand, Burma, and China, are identified. Black lines trace railroads, while red lines highlight major roads. Large red dots mark 'allied' military bases and a dashed line in Laos traces the infamous Ho Chi Minh Trail. An alphabetical index entitled 'Cities in Southeast Asia' appears along the bottom border.

The Boston Globe's Explanation of the Map

On Wednesday, May 11, 1966, the Boston Globe published a story about this map's genesis before publishing it on Sunday, May 15, 1966. The column reads, in part,

But production of the map, in five colors and two full pages in size, was a series of challenges without reference points for its newspapermen developers, who found there is more to map-making than drawing a longitude line.

Involved were three cartographers from Wayne State University in Michigan and dozens of government and private base maps of the Southeast Asia area charting everything from monsoon airflow to surface configurations.

It took more than 400 hours of actual working time to produce the map. It will be distributed as a special report section to readers of Sunday's Globe.

Standard newspaper reference maps were deemed unacceptable because, while excellent to illustrate quick breaking news stories, they lacked the detail and quality of a true geographic guide.

Map makers were consulted. One large company had none available with specific Viet Nam places of import indicated. Another wouldn't release its printing plates under any consideration.

In four weeks, they produced a map which shows general terrain, political significance, the pattern of war, and pinpoints vital places in this far off theater of operations.

This map was compiled by Dr. Richard J. Kopec, Andre J. Cedras, and James R. Slack, copyrighted by Detroit News, and published by The Boston Globe on Sunday, May 15, 1966. This map does not appear in OCLC and we are aware of only one other example in private hands.

Richard Joseph Kopec (August 20, 1928 - December 2, 2019) was an American geographer and professor. Born in Passaic, New Jersey, Kopec attended Shippensburg University for his undergraduate education. He received a Ph.D. in geography from Wayne State University. In 1966, Kopec held his Ph.D. and was an assistant professor of geography at Wayne State. He became the chair of the Department of Geography and the University of North Carolina at Chapel Hill and also served as the chairperson for the North Carolina Geographical Society. Kopec met his wife Pauline while studying at Shippensburg University and they were married for over sixty-seven years. They had three children. Learn More...