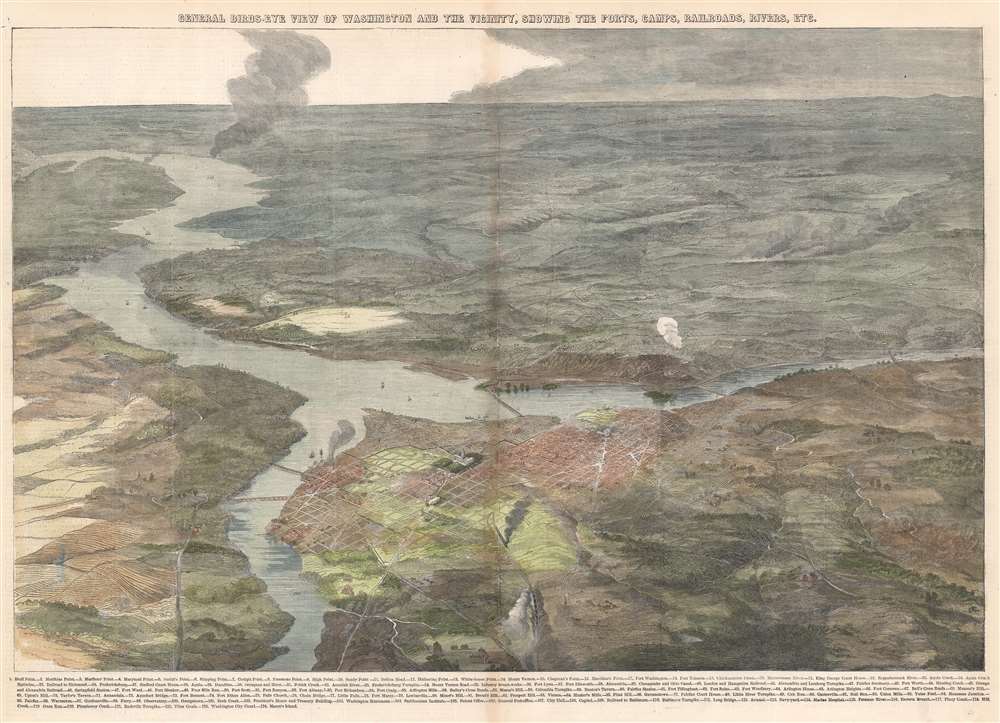 This is a stunning 1862 birds-eye view or map of Washington D. C. and vicinity, published nine months after the outbreak of the American Civil War, in the January 4, 1862 issue of Harper's Weekly. The view overlooks Washington from the north, placing the U.S. capital firmly in the foreground. Occupied Virginia (and several Union forts protecting Washington, D.C.) lies just across the Potomac. Fredericksburg, Virginia, the site of the Battle of Fredericksburg on December 13, 1862, appears in the background, labeled with the number twenty-six.

A Detailed Look at the View

Why Produce This View?

After the First Battle of Bull Run on July 21, 1861, which took place just thirty miles southwest of Washington, D.C., Congress appropriated funds to construct a thirty-seven-mile ring of forts around the capital. By the end of the war, this defensive ring consisted of sixty-eight forts connected by twenty miles of trenches, and ninety-three artillery positions with some 800 cannons. Washington was threatened with capture shortly before this view was published. It is likely that Harper's hoped the view would underscore the security of Washington without offering valuable reconnaissance to the Confederates.

This view has been attributed to Thomas Nast and was issued as part of the January 4, 1862, edition of Harper's Weekly, with part of Charles Dickens' new Christmas Stories appearing on verso. We note three examples cataloged in OCLC, in the collections at George Washington University, the National Defense University Library, and George Mason University. We also note an example in the collection at Princeton University.


Thomas Nast (September 27, 1840 - December 7, 1902) was a German American editorial cartoonist and caricaturist. Born in Landau, Germany, to a political dissenter, Nast's father enlisted on a French man-of-war and then an American ship, allowing his family to immigrate to the United States, where he joined them in 1850. Nast's talent for drawing was evident early in his life, but he was not much of a student for anything other than art. Nast's first cartoon appeared in Harper's Weekly in 1859, when he was eighteen years old. Nast then went to Europe as a correspondent for the New York Illustrated News in 1860 to cover a prize fight and then worked for The London Illustrated News in Italy where he accompanied Garibaldi on his military campaigns to unite Italy. Nast returned to the United States in 1862, and quickly found a job with Harper's Weekly, where he worked until 1886. His cartoons dealt with American politics with ire for Tammany Hall and Boss Tweed. Generally, Nast's work opposed racism, advocated for the abolition of slavery, and championed minorities. Even if Nast's work generally supported these issues, it was not completely free of racism or stereotyping. After Nast left Harper's Weekly in December 1886, he struggled to find work and lost his audience. He also had been dealing with problems with his hands since the 1870s, which affected his ability to work as an artist. He applied for a job with the State Department in 1902, in the hope of receiving a posting somewhere in western Europe. No posts were available in that part of the world, but President Theodore Roosevelt admired Nast's work and offered him the position of United States Consul General in Guayaquil, Ecuador. Nast accepted and left for Ecuador on July 1, 1902. Not long after he arrived, an outbreak of yellow fever swept through Guayaquil. Nast remained at his post and helped numerous diplomatic missions and businesses escape the disease. He, however, was not as lucky. He contracted yellow fever and died on December 7, 1902. Today, Nast is remembered as the creator of the modern depiction of Santa Claus, the Republican Party elephant, and the Tammany Hall tiger. His work also popularized Uncle Sam and the Democratic Party donkey, although he did not create either of these symbols. Learn More...