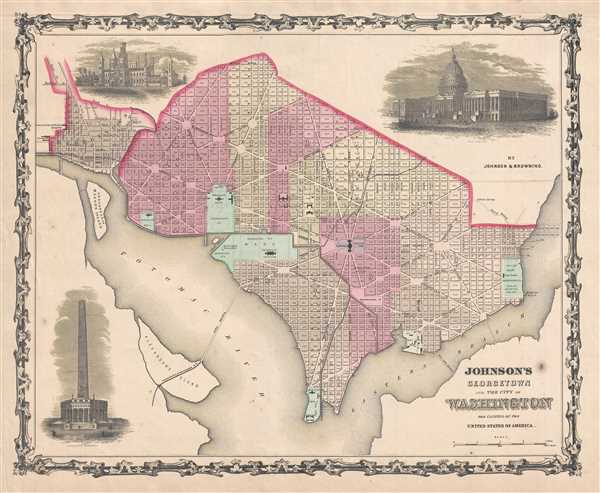 Features a vignette of the original design for the Washington Monument.

This is the 1860 first edition of A. J. Johnson and Ross C. Browning's city map or plan of Washington, D.C. and Georgetown. The map depicts the city from Georgetown College (now part of Georgetown University) to the Anacostia River (then known as the Eastern Branch) and from North W. Street to the confluence of the Anacostia and Potomac Rivers. Highly detailed, streets throughout the city are labeled and each block is identified by address. City wards are shaded yellow and pink to allow for easy differentiation, while the areas around government property, such as the President's House (The White House), the National Observatory, Lafayette Square, and the Smithsonian Institution are shaded green.

Three vignettes adorn three of the map's corners. These include, in the upper left corner, the Smithsonian Institution Building, also known as the Castle, which was the first building in the now expansive Smithsonian Institution and, in the upper right, the U.S. Capitol Building. An illustration of the original plan for the Washington Monument is situated in the lower left corner, featuring a Greek pantheon temple with thirty columns and a grand Egyptian obelisk. Construction on the obelisk began in 1848, but funding for the project dried up in 1856. After suffering several more construction delays and the American Civil War, construction on the Washington Monument restarted in 1876 using the original design minus the Greek pantheon and was completed in 1884.

This map was published by A. J. Johnson and Ross Browning in the 1860 edition of Johnson's New Illustrated (Steel Plate) Family Atlas.