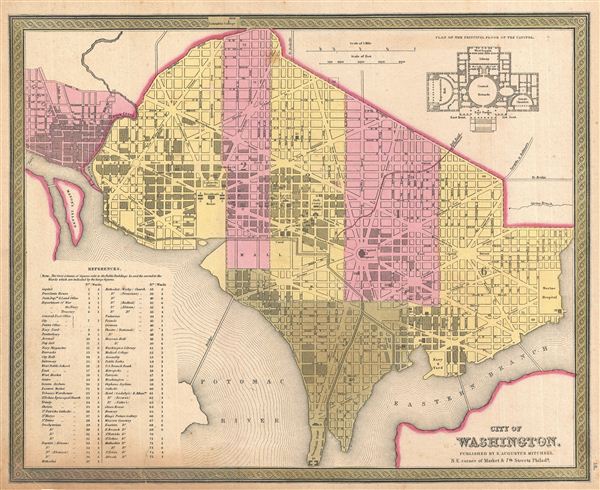 A remarkable combination of actual and proposed urban cartography.

A fine example of S. A. Mitchell and Thomas Cowperthwait's 1854 map or plan of Washington D.C. Given that most of Washington D.C. was under construction when this map was drawn, Mitchell's plan is a remarkable combination of existing of existing cartography and future projections. Though Pierre Charles L'Enfant's brilliant plan for the national capital is evident in the grid and ray layout, and many of the great national monuments are identified, the practically of the national capital was that, even in 1854, more than 50 years after the city's construction began, Washington D.C. remained little more than a ragtag cluster of Grecian monuments surrounded by dense forest. Anthony Trollop, an English novelist, remarked on the barrenness of D.C.,

Nonetheless, a city was emerging, with rail lines, bridges, parks, and city wards, surveyed and laid down for the construction teams. The Capitol Building, the floor plan of which appears in the upper right quadrant, was one of the first buildings in Washington to be completed and was functional by about 1846, though, admittedly, was a very different building than we known today. A further list of extant and proposed monuments and government buildings, along with their wards and numerical identifieers, appears in the lower left quadrant.

This map was prepared by S. A. Mitchell for publication by the Philadelphia firm of Thomas Cowperthwait & Co. as plate no. 16 in the 1854 edition of Mitchell's New General Atlas. Dated and copyrighted, 'Entered according to act of Congress in the year 1850 by Thomas Cowperthwait & Co. in the Clerk's office of the Eastern District of Pennsylvania.'