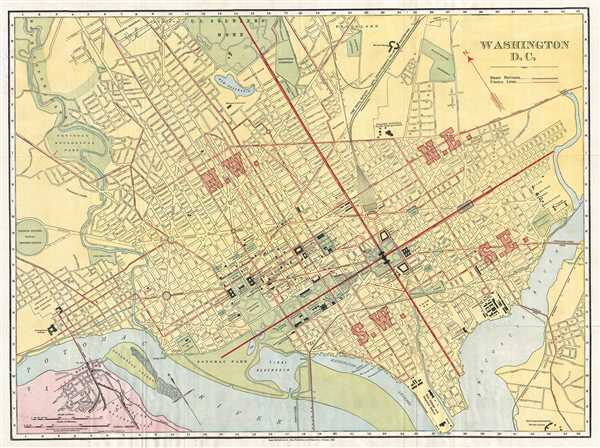 This is a beautiful 1910 map or plan of Washington D.C. by Rand McNally and Company. It covers Washington D.C. from the Potomac River to the Anacostia River and north to the U.S. Soldier's Home. The map is exceptionally detailed, noting important buildings, streets, monuments, electric lines, parks, and steams railroads. Some of the sites other than the U.S. Capitol Building, the Supreme Court, and the Executive Mansion, also known as the White House, include the Medical Museum, which is located on the National Mall close to the Smithsonian Institution, the U.S. Naval Museum of Hygiene, the National Zoological Park, Howard University, and the Columbia Institution for the Deaf and Dumb. Union Station, Georgetown College, and the Government Printing Office are also depicted on this map. The city is divided in four sections marked N.W., S.W., S.E., and N.E., by lines emanating from the Capitol Building.

The map was published by Rand McNally and Company in 1910.

Library of Congress Geography and Map Division G3850 1910 .R3.
Looking for a high-resolution scan of this?