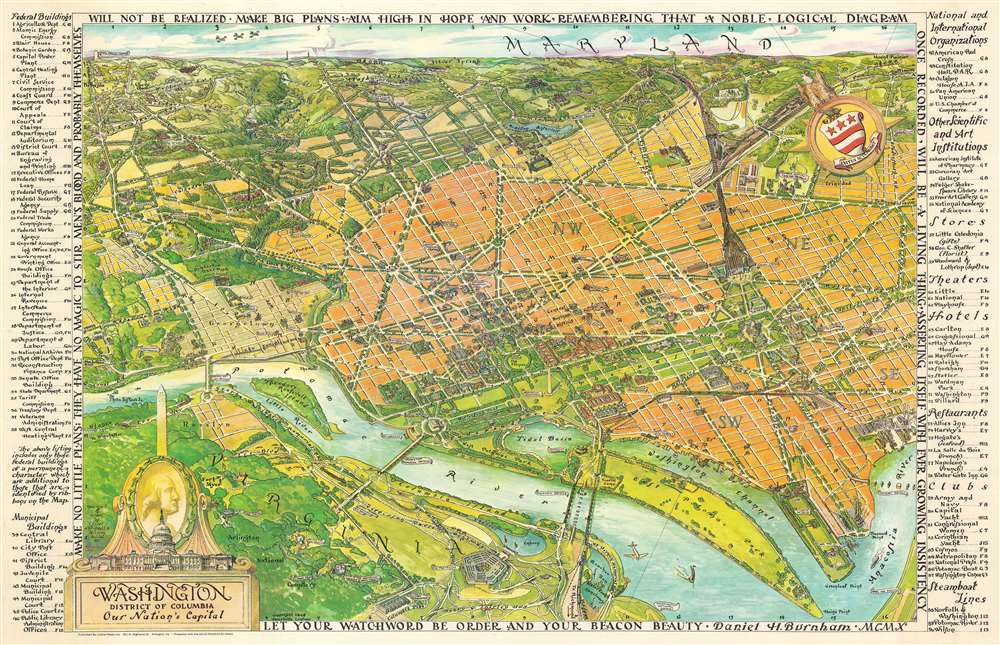 Illustrates the U.S. Capital, the Washington Monument, and the Lincoln Memorial, among other famous Washington, D.C. sites.

This is a 1949 Oliver Whitwell Wilson pictorial bird's eye view of Washington, D.C. The map depicts the region from the southeast, looking from Virginia across Washington, D.C. to Maryland. Numerous government buildings monuments and throughout the city are illustrated and labeled, including the Capital Building, the White House, the Supreme Court, the Washington Monument, the Lincoln Memorial, and the Jefferson Memorial. Other landmarks are identified, including the Smithsonian Institution, the National Gallery of Art, the Reflecting Pool, Ford's Theater, and the Library of Congress. Other fixtures around Washington, D.C. are also highlighted, such as George Washington University, Georgetown University, the Naval Observatory, and Union Station. Streets are illustrated, although not all are labeled. Across the river in Virginia, Arlington National Cemetery, complete with the Tomb of the Unknown Soldier, the U.S.S. Maine mast, and Arlington House. The Pentagon, not even ten years old at the time, is also illustrated. Rosslyn is labeled. Outside Washington to the north, several roads are labeled, as are Rock Creek Park, the Army Medical Center, the U.S. Soldier's Home, Catholic University, and, along the horizon, Bethesda, Maryland. George Washington's coat of arms is illustrated in the upper right quadrant at the center of a compass. In the lower right sits a decorative title cartouche featuring an illustration of the Capital, the Washington Monument, and a portrait of George Washington, the first President of the United States. An index of ninety different locations throughout the city is situated along both the left and right borders and includes federal buildings, municipal buildings, scientific and art institutions, stores, theaters, hotels, and restaurants. Each is numerically identified both in the index and on the map, and the index also provides each building's grid location on the map.

This map was drawn by Oliver Whitwell Wilson and published by Henrietta Lintner in 1949. This map is part of the collections of seven different institutions, including the Library of Congress, Harvard, the University of Illinois Urbana-Champaign, and the University of California-Los Angeles. We are also aware of a handful of times it has appeared on the private market.

Oliver Whitwell Wilson (1902 - March 30, 1978) was an British architect and analyst who lived in the United States. Born in Shepperton-on-Thames, England, Wilson immigrated to the United States in 1919 and in 1924 graduated from Columbia University's School of Architecture. He stayed in New York City and worked as an architect until he moved to Washington, D.C. in 1941 to take a job with the Army Corps of Engineers as a civilian architect. He began working for the Defense Intelligence Agency in 1946 as a civilian intelligence analyst and retired from that position in 1971. For their work during the Cuban missile crisis, his group received a presidential commendation from President John F. Kennedy. Wilson was also a prolific poet and wrote more than 950 poems during his life. He was married to Marjorie, whit whom he had two sons.