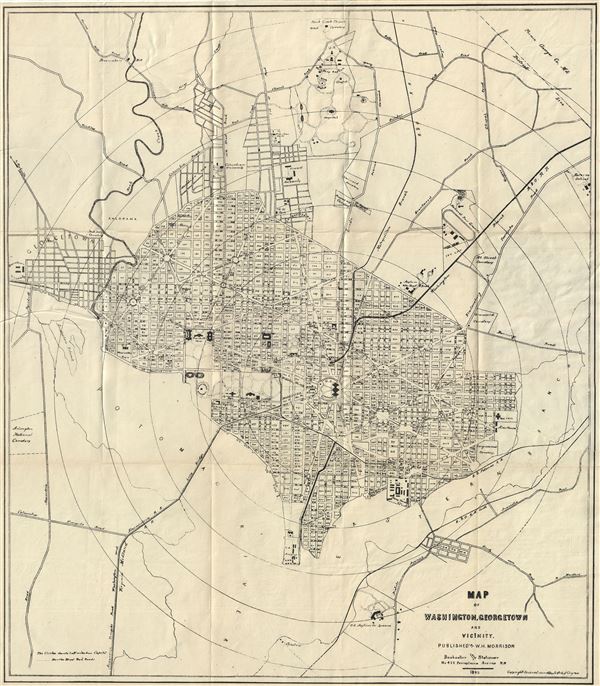 An interesting 1882 map of Washington D.C. issued by the W. H. Morrison. The map covers all of Washington D. C. as well as the surrounding region and was prepared for The Strangers Guide to Washington, Georgetown and Vicinity. This map was clearly reduced from a larger map, most likely a government publication, and consequently, can be difficult to read in places.

W. H. Morrison (fl. c. 1880 - 1910) was a law book specialist, publisher, and stationer active in Washington D. C. during the latter part of the 19th century and early 20th century. Morrison was described thus by his contemporaries:

W. H. Morrison is, in the usual term, a hustler, being his own solicitor. By scouting surrounding towns is a fast building up a good trade. His long experiences in the line and extensive acquaintance give him at once a good position in the trade. -The American Stationer Feb 4, 1892.

Morrison printed maps and Guides to Washington D.C. as well acted as a bespoken stationer and a government printer. Among other things, Morrison was a strong advocate of paper currency - no doubt hoping to get an edge on the business of printing money. He maintained a storefront at 475 Pennsylvania Ave, N.W. Learn More...

Bryan, W. B., Bibliography of the District of Columbia (Washington D.C.), p. 121.
Looking for a high-resolution scan of this?