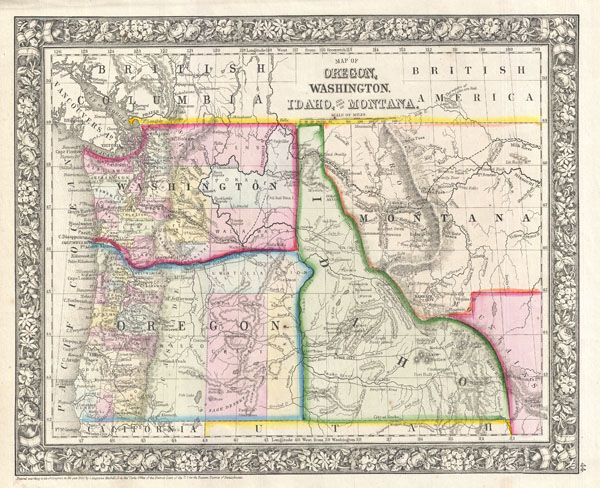 A beautiful example of S. A. Mitchell Junior's 1866 map of Washington, Oregon, Idaho and Montana. Color coded according to county and territory. Identifies the proposed Stevens route for the Northern Pacific Railroad as well as the Emigrant Road. Gold deposits are noted near Hells Gate Montana, north of Boise Idaho, and along the Idaho Montana border. Shows various geographic features, American Indian tribes, and notable peaks as well as providing details on towns, counties, and other political data. Subsequent editions of this map add more sophisticated county breakdowns in Montana and Idaho. One of the most interesting and ephemeral maps of this transitional region to appear in the mid 19th century. Surrounded by the attractive floral border common to Mitchell atlases between 1860 and 1866. Prepared by W. H. Gamble for inclusion as plate 44 in the 1866 issue of Mitchell's New General Atlas. Like many American map publishers of this period, though he did update his maps, Mitchell did not update his copyrights, consequently this map is dated and copyrighted to 1861: 'Entered according to Act of Congress in the Year 1861 by S. Augustus Mitchell Jr. in the Clerk's Office of the District Court of the U.S. for the Eastern District of Pennsylvania.'