1780 Bellin Map of the West Coast of Africa, from Gibraltar to Guinea-Bissau 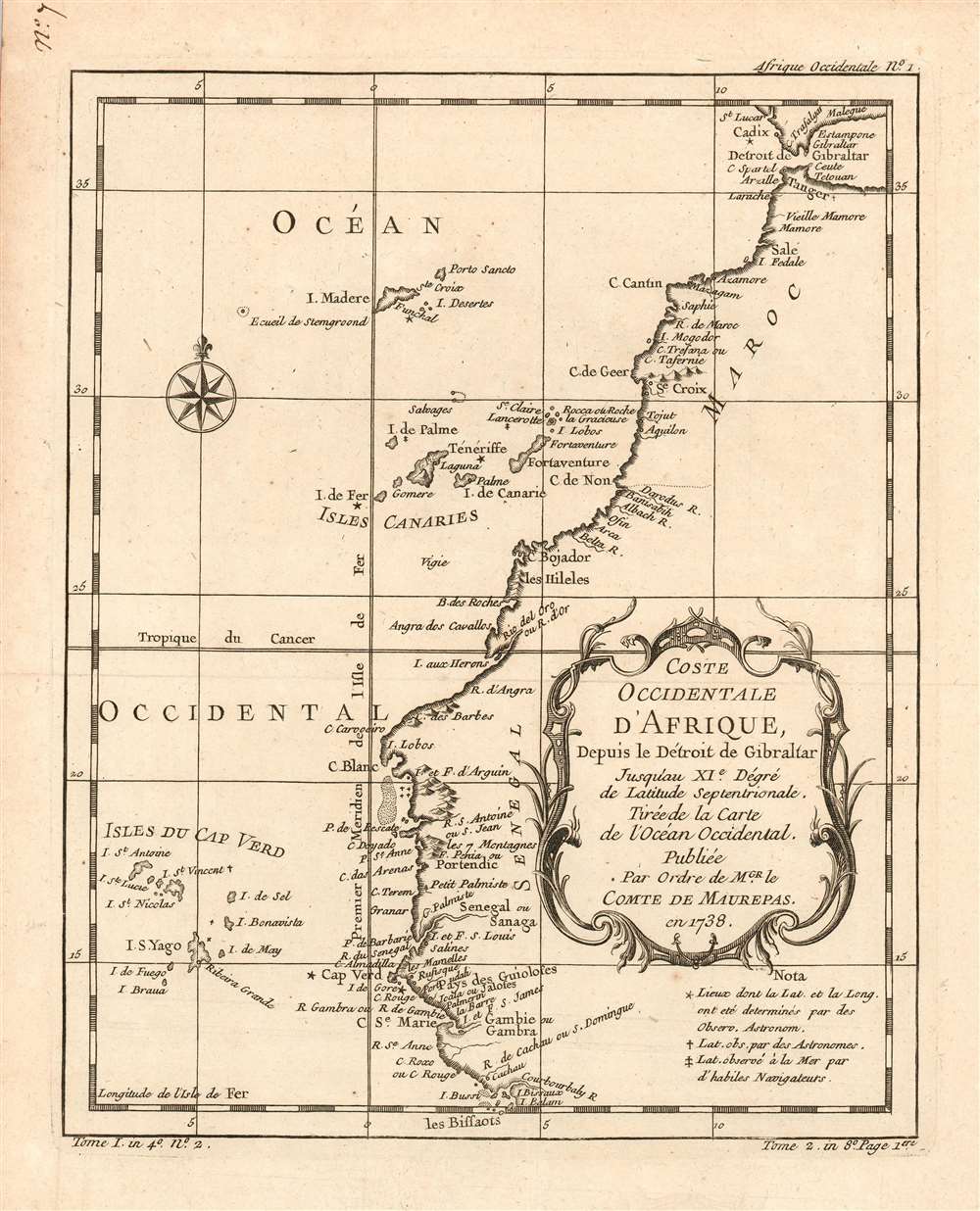 1780 Bellin Map of the West Coast of Africa, from Gibraltar to Guinea-Bissau

An Attractive Chart of Western Africa, the Canary Islands, and the Cape Verde Islands.
$300.00

This is a 1780 Bellin map of the western coast of Africa, From the Strait of Gibraltar and continuing south to what is now Guinea-Bissau. This little map is surprisingly well detailed. It includes notations indicating places whose latitudes had been observed by astronomers, those whose latitudes had been observed by 'skilled navigators,' and those whose latitudes and longitudes had been determined by astronomical observation. These last - Cadiz in Spain, Tenerife, the Isle de Fer, Cape Verde and the island of Gorée, marked with stars on the map - show the extent to which this part of the African coast was well-understood by the time this map's 1738 source was printed.

The Arguin Banks: 'I'm a Map You Don't Meet Every Day'

The map also shows an area of shallows, not named but shown just south of C. Blanc, near the I. et F. d' Arguin. These are the Arguin Banks, a notorious navigational threat to ships traveling coastal Africa. Even an incompetent, politically-appointed captain should have known of the hazard. Nevertheless in 1810 Viscount Hugues Duroy de Chaumareys, Captain of the French Frigate Méduse, would recklessly send his ship due south through the Arguin Banks. This would result in the loss of his ship, and more than 130 souls abandoned aboard a raft left floating in open ocean. The infamous wreck of the Méduse became the subject of tremendous political scandal; the infamous raft of the Méduse became the subject of a tremendous painting by Théodore Géricault, and the painting itself (with the band members' faces pasted in) would adorn the cover of The Pogues' 1985 sophomore triumph, Rum Sodomy and the Lash.

Bellin drew the information for this chart from his own superb 1738 chart of the Atlantic Ocean, Carte Reduite de l'Ocean-Occidental. It was this grand chart, and not the present lovely if narrowly-focused engraving, that was produced 'Par Ordre' of the Count de Maurepas. It seems slightly misleading that Bellin should here invoke this famous French statesman, naval strategist and spymaster, given that the present map was to appear in Harpe's 1780 Abrégé de l'histoire générale des voyages, which epitomized Prévost's Histoire générale des voyages - a work perhaps better known for its imaginative flourish than for its factuality.

The map was included in Harpe's 1780 abridged edition of Prévost's Histoire générale des voyages. This map appears on the market from time to time, but OCLC lists only three copies of the separate map (at the Bayerische Staatsbibliothek, the Universitatbibliothek LMU Munchen and the Universitatbibliothek Augsburg) although inconsistencies in cataloguing mean this number may be higher. Prévost's Histoire and Harpe's abridged version of it are well represented in institutional collections.