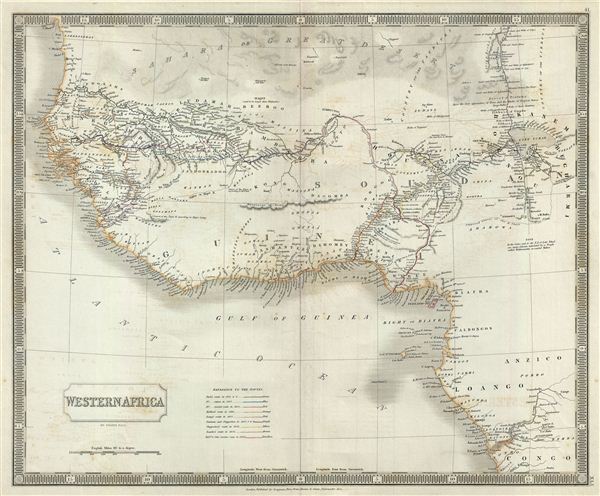 This is a beautiful map of western Africa from Sidney Hall's extremely scarce 1835 New General Atlas. It covers the entirety of western coast of Africa from River Zaire or Congo west through the Slave Coast, Gold Coast, Ivory Coast, Guinea, and north past the Grain Coast and Senegambia as far as the Bank of Arguin (Banc d'Arguin). Hall names numerous African tribes and nations throughout, and offers other interesting cartographic annotations such as the 'source of the Niger River according to Mr. Park' (Mungo Park, whose exploratory route is noted) and another 'source of the Niger River according to Major Laing' near the Mountains of Loma. It offers interesting inland detail along the Niger River as far east as Timbuktu, with the 'supposed direction of the Quorra or Niger' rendered somewhat correctly emptying into the Gulf of Guinea. West of Timbuktu the city of Walet (said to be larger than Timbuctoo) is also identified. The continent is partially bisected by the dramatic and mythical Mountains of Kong, which, based upon the explorations of Mungo Parks, were presumed to be the southern barrier to the Niger River valley. Hall to his credit reduces the Kong mountain range considerably over the expansive range depicted in earlier English maps by Thomson, Pinkerton, and others. To the east Lake Tchad (Chad) is well mapped. The supposed course of the River Shary is also noted just to the south of Lake Chad.

This region was particularly important in the early 19th century as the source of most African slaves imported to the New World. Even so, at the time this map was made, the slave trade, thriving since the 5th century was rapidly diminishing due to decreased demand for slaves in the New World, the British outlawing of slavery in 1808, and subsequent diplomatic efforts including treaties with over 50 African rulers outlawing the practice. Many African economies adapted by shifting to the export of mineral and agricultural resources, which led to the European scramble for territory, occupying most of the continent by the end of the 19th century. Europe's colonial interests in Africa haphazardly carved up the continent into unnatural territories, often forcing historic enemies into close proximity and leading to social problems that remain to this day.