1840 Wyld Map of the Coast of West Africa 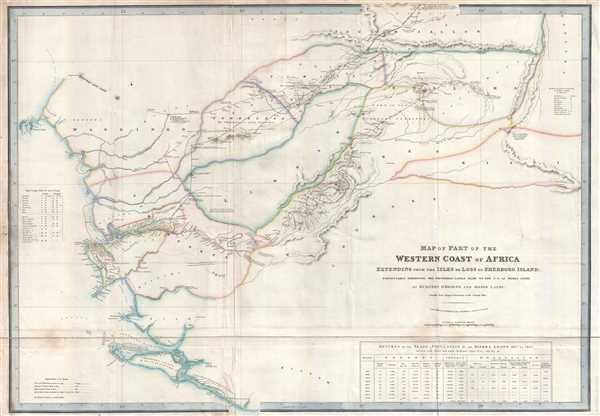 1840 Wyld Map of the Coast of West Africa

One of the best known early maps of the British Colony of Sierra Leone.

This is an 1840 James Wyld map of West Africa. The map depicts the western coast of Africa from the Iles de Los and Guinea to Sherbro Island and Sierra Leone. One of the best known early maps of the British Colony of Sierra Leone, the duality between the meticulously charted coastline (the work of the Royal Navy) and the almost completely blank interior acts as a visual summary of European knowledge of and interest in Africa. The only detailed regions of the interior are those traversed by British explorers. The routes of four different expeditions into the interior are illustrated: the route followed by Thomas Masterman Winterbottom in 1794, the route of Surgeon Brian O'Beirne's 1821 expedition, the routes of both of Major Alexander Gordon Laing's 1822 expeditions, and the route of Jack le Boré's 1822 expedition. Numerous towns, villages, and other settlements in the region are noted and labeled, along with rivers, lakes, mountains, and other physical features. Numerous notes concerning the region are also included. A very interesting table, entitled 'Returns of the Trade Population etc. of Sierra Leone 1817 to 1825' is situated in the lower right corner. Two columns in the table list the number of liberated Africans living in the colony by gender.

Sierra Leone in the British Empire

Sierra Leone held a unique position in the British Empire because it was founded as a refuge for ex-slaves following the British abolition of the slave trade in 1807. Freetown was founded in 1792 by the British Sierra Leone Company and expanded drastically following the 1807 ban and the naval base at Freetown was expanded in an effort to combat the slave trade. British officials also instituted an 'apprentice system' for ex-slaves, supposedly employing them with European settlers based on their skillset. In reality, that is not what happened. Former slaves were assigned to apprenticeships without regard for their strengths. For example, an individual without any experience working in the fields would be assigned to work as a farm hand, while experienced farm workers would be assigned to craft workshops where they had no experience. The system quickly devolved into slavery in everything but name, as apprentices could not leave or change jobs without their employer's consent and were paid nothing close to a living wage. While some experienced improvement in living conditions, 'the apprenticeship system revealed itself to be patronizing and misguided'.

This map was created by James Wyld and published in 1840.

Afriterra 43.
Looking for a high-resolution scan of this?