1861 Johnson Map of the World on Hemisphere Projection 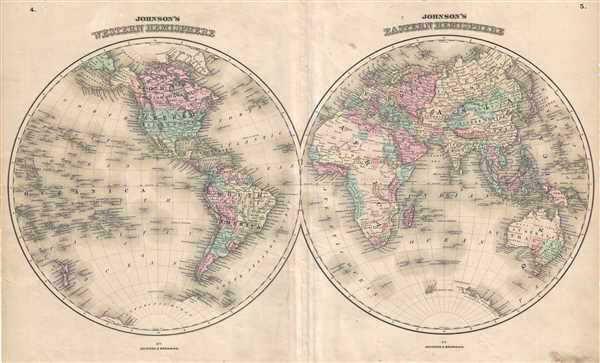 1861 Johnson Map of the World on Hemisphere Projection

The World on hemispherical projection as depicted by Johnson.

This is a beautiful example of A. J. Johnson and R. Browning's 1861 map of the world on a hemispherical projection. Offers a fascinating snapshot of the world during a period of rapid globalization and discovery. Africa is largely 'unexplored' though Lake Uniamesi, something that may be taken for an embryonic form of Lake Victoria, Lake Tanganyika or both, does appear. This curious lake, supposedly identified by Speak, was frequently written of in mid century missionary reports as the source of several important African river systems including the Congo. The Antarctic continent is shown only sketchily, representing the relatively primitive state of Antarctic exploration in 1861.

The map features the strapwork style border common to Johnson's atlas work from 1860 to 1863. Published by A. J. Johnson and Browning as plate nos. 4 and 5 in the 1861 edition of Johnson's New Illustrated Family Atlas. This is the last edition of the Johnson Atlas to bear the 'Johnson and Browning' imprint. Subsequent editions reflect Ward's 1862 acquisition Ross C. Browning's shares in the firm.