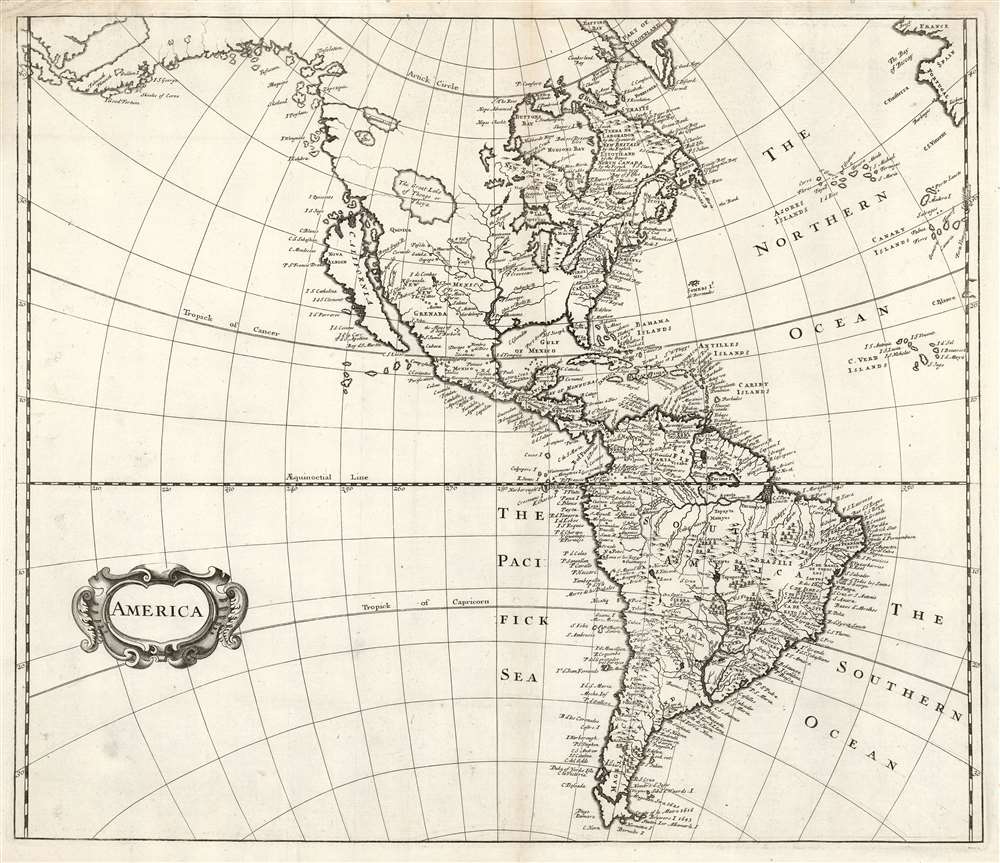 This 1703 map of America was printed for Peter Heylyn's Cosmography. While it has been attributed to Robert Morden, this connection is not at all conclusive; the unique cartography exhibited on this map resembles none found on Morden's maps. Attributions of the engraving of the map to William Trevethen are also erroneous: Trevethen engraved the maps appearing in earlier editions of Cosmography, which this one replaced. While this map served as the model for John Senex's 1719 map of the Western Hemisphere, its own precursors are unknown. An array of features set this map apart from any prior work.

The Gulf Coast and Florida

The map shares Coronelli's placement of the Mississippi, and the Great Lakes resemble those of Hennepin. In Florida, we see a unique, unnamed river cutting northwards from the Gulf.

Lakes of the Northwest

Three imaginary in the northwest appear here for the first time: Aquinanbock, Lake of Isles, and the 'The Great Lake of Thongo or Thoya.' This latter is accompanied by two speculative rivers connecting to the Pacific. We see no other reference to these lakes.

This map depicts an insular California, after Sanson's model. Of the maps of the seventeenth century to depict California as an island (as indeed most of them did), most did not attempt to show any part of the coastline to the northwest of that island. Some few retained part of the coast as it appeared on 16th and early 17th century maps, but most leave the area blank. The present map is singular in showing that coast in detail, with islands and unique placenames. Zapozitin, either an island or point, is shown - and is of note as the toponomy bears distinct kinship indigenous Mexican etymology. A bay named 'Desolation' appears (far to the north of the actual Desolation Bay, and appearing more than ninety years before the naming of Desolation Bay by Vancouver.) The spurious islands of Colubra, Wanguino, Payham, and Maquino are all shown and named. An 'I. S. Iago' and 'I. Quiesinto' both appear near the mouth of one of the rivers connecting to Lake Thongo/Thoya. Indeed, despite tantalizingly resembling the shape of the actual coastline, the entire Pacific Northwest appears to be a tour de force of imagination. The coastline turns sharply towards the west between 50 degrees north and the Arctic Circle, curving roughly southwards strongly reminiscent of the actual placement of the Aleutian Islands (despite there being no recorded exploration prior to the 1740s.)

This 'proto-Aleutian' landmass appears to correspond to the imaginary land of Ieso, despite not bearing that placename. On early maps, Ieso (sometimes spelled Iesso, or Yedso, or a similar variation) appears in lieu of Hokkaido variously as an island, a peninsula connected to Asia, or a peninsula connected to America. Here, Ieso is given an unusual level of detail, apparently tapping the same wellspring fueling the mapping of the Pacific Northwest. Place names such as 'Falmouth,' 'Plimouth,' 'I. Good Fortune,' and 'I. S. George' seem to suggest that these coasts were the discoveries of English explorers, although who these might have been escape us; we see no references to these on any other maps. Oddly, none of these place names are repeated on the Asia map that appeared in the same volume, produced by the same hand.

While showing the mythical 7 Cities of Cibola in New Grenada, the map is notable for its roughly correct placement of the Rio Grande, running from Santa Fe to the southeast and emptying into the Gulf of Mexico rather than the Bay of California.

This map was executed for inclusion in the seventh, and final, 1703 edition of Peter Heylyn's Cosmography in four books. Heylyn, who died in 1662, did not contribute to the production of this map, any more than he did on the one it replaced, which was largely copied from John Speed's map of America. The 1703 edition was expanded and updated by Edward Bohun - whose 1691 Geographical Dictionary contained maps by Robert Morden. It may have been the intention of the publishers to rely on maps from the same source, and it appears (according to Mead Cain in his article in The Map Collector # 57) that publishers advertised that Morden would execute the maps for the new edition. But by the time Cosmographia reached the public, Bohun himself was three years dead of Yellow Fever in the Carolinas, and the maps appearing in the book bear no resemblance to any of Morden's work. Heylyn's Cosmographia is well represented in institutional collections. Only four institutions list copies of this separate map: The Osher, Depaul University, the University of Alaska, and Alaska State.

Peter Heylyn (November 29, 1599 - May 8 1662) was an English religious polemicist and historian, known for having incorporated his political concepts into his geographical works Microcosmus (1621) Cosmography (1657). He was born in Oxfordshire, and eventually would graduate from Magdalen College, Oxford, on 19 January 1616, at the age of 16. Later he became a lecturer on historical geography at Magdalen, earning his masters' in 1620. He became well known as a controversialist, and as an outspoken preacher. A clerical follower of Charles I, he would suffer setbacks under the Commonwealth following the execution of the King. Nevertheless he remained a prolific writer and an acrimonious controversialist against the Puritans. In addition to this, he followed in the footsteps of earlier geographers in writing his own 'Cosmography,' an attempt to describe in meticulous detail every aspect of the known world. This work would prove popular enough to be produced posthumously in seven editions. Learn More...


Edmund Bohun (1645–1699) was an English writer on history and politics, and a Tory polemicist. He was born in Ringsfield, Suffolk, England and educated at Queens' College, Cambridge. He would begin writing against the Whigs after the Exclusion Crisis of the 1680s. His views - compounded with his unpopularity - would land Bohun briefly in prison. He would emigrate to Carolina, becoming in 1698 the first recorded Chief Justice there. Popular or no, Bohun died of Yellow Fever in 1699. Learn More...

Heylyn, P., Cosmography in four books. Containing the Chorography and History of the Whole World, (London) 1703.