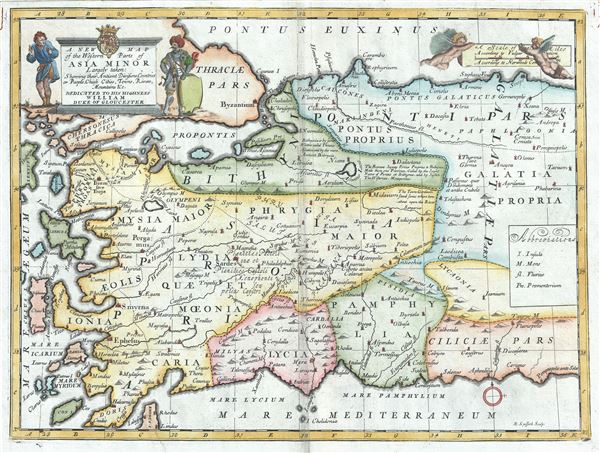 This is a beautiful 1712 map of the western part of Asia Minor or Turkey by Edward Wells of Oxford. It covers the western part of Turkey from the Aegean Sea east as far as central Turkey, noting several towns, cities, rivers, mountains, ancient divisions, etc. The map also contains numerous interesting cartographic annotations. A decorative title cartouche appears on the top left quadrant of the map featuring the coat of arms of the Duke of Gloucester. This, like many other Wells maps, is dedicated to Prince William, Duke of Gloucester and son of Queen Anne, who, when this map was being prepared, was a student at Oxford. Engraved by R. Spofforth and published by T. Bonwicke for the 1712 edition of Edward Wells' Atlas, A New Sett of Maps both of Ancient and Present Geography.