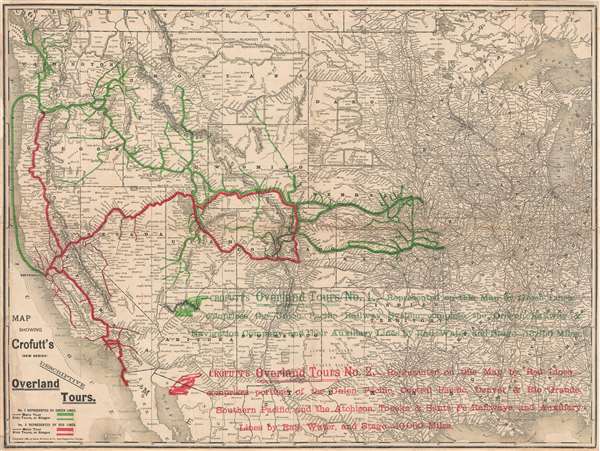 This uncommon 1888 map illustrates proposed tours of the American west as described in Crofutt's Overland Tours. The map covers roughly from the Pacific Ocean to Lake Michigan, and all of the states in-between. The map focuses on railroad and stage coach routes. Two routes are highlighted one in green,

Crofutt's Overland Tours no. 1, represented on this map by green lines, comprises the Union Pacific Railway system, complete, the Oregon Railway and Navigation Company, and their auxiliary lines by rail, water, and stage, 13,850 miles.

And another in red,

Crofutt's Overland Tours no. 2, represented on this map by red lines, comprises portions of the Union Pacific, Central Pacific, Denver and Rio Grande, Southern Pacific, and the Atchinson, Topeka and Santa Fe Railways, and auxiliary lines by rail, water, and stage, 10,000 miles.

By the 1880s the gold rush had long since died down, but what remained was a fascination for the richness, landscapes, and sheer wildness of the American West. Traveling theater groups like Buffalo Bill's Wild West Show became sensations in the east and the more adventurous tourists booked transcontinental train voyages to see the wonders of the west. Crofutt's guides and maps were among the principal mechanism by which such voyages were planned and executed.

This map was published by Rand McNally to accompany Crofutt's Overland Tours, 1888.

George Andrews Crofutt (1827 - January 27, 1907) was an American publisher, writer, and promoter of the westward expansion. He was born in Danbury, Connecticut. Looking for greater financial opportunities he moved as a young man to New York City and later Philadelphia, where worked as a journalist, publisher, and editor. During the Panic of 1857 he went bankrupt and so, with nothing to lose, joined the Pike's Peak Gold Rush, arriving in Colorado in 1860. Crofutt was unsuccessful as a prospector, but fell in love with the majesty and beauty of the American West. When he attended the May 10, 1869 driving of the Golden Spike at Promontory Summit, Utah, which celebrated the connecting the Central Pacific and the Union Pacific Railroads, he reconnected with his passion for journalism. This began one of the most successful publishing careers in 19th century American. Crofutt was one of the first to recognize and capitalize on the possibilities of transcontinental tourism provided by the completion of the Union Pacific Railroad. He was a great promoter of westward migration, Manifest Destiny, and the settlement of Colorado. He commissioned John Gast's famous 1872 painting, American Progress, and, from 1873, issued limited edition chromolithographs of it. His series of guides, including the Great Transcontinental Railroad Guide, Crofutt's Overland Tourist, Crofutt's Overland Tours, Crofutt's Grip-Sack Guide and more, were among the first travel guidebooks to focus on the American West. These revolutionary guides included engravings (and later photographs) of natural wonders and indigenous peoples, as well as train and stage schedules, maps, fare information, and regional descriptions. Crofutt publications proved so popular that by 1878 he claimed to have sold more than 300,000 copies of his Overland Tourist. Fifer described Crofutt as 'One of the most prolific and widely-read authors on the American West in the last half of the 19th century.' Crofutt died in New York City at age 79. Learn More...