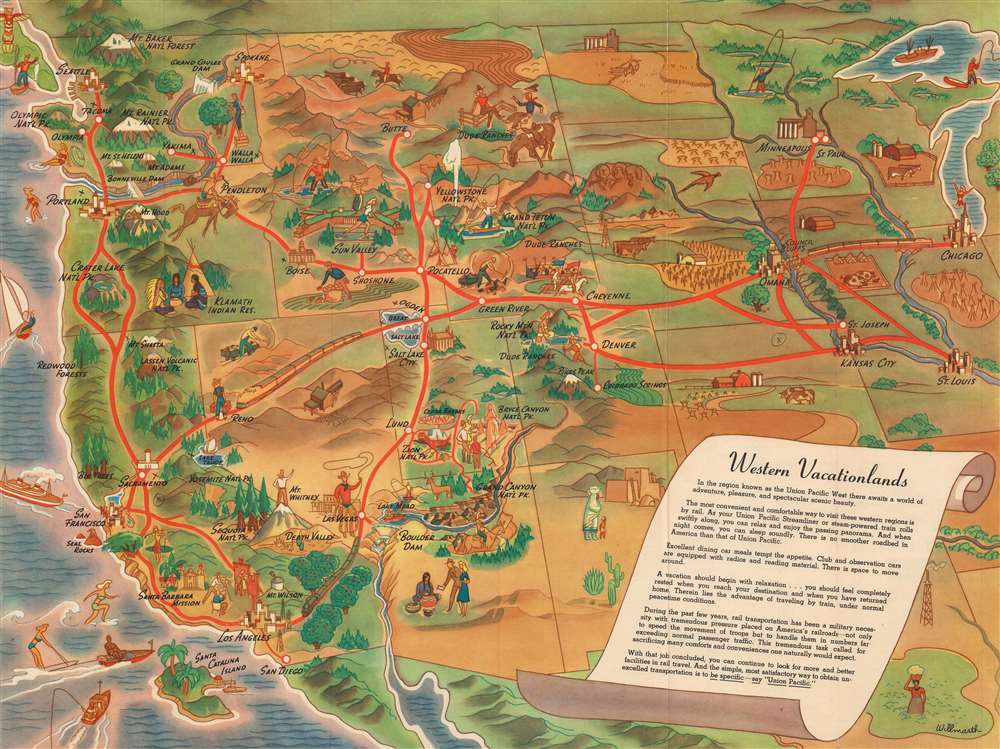 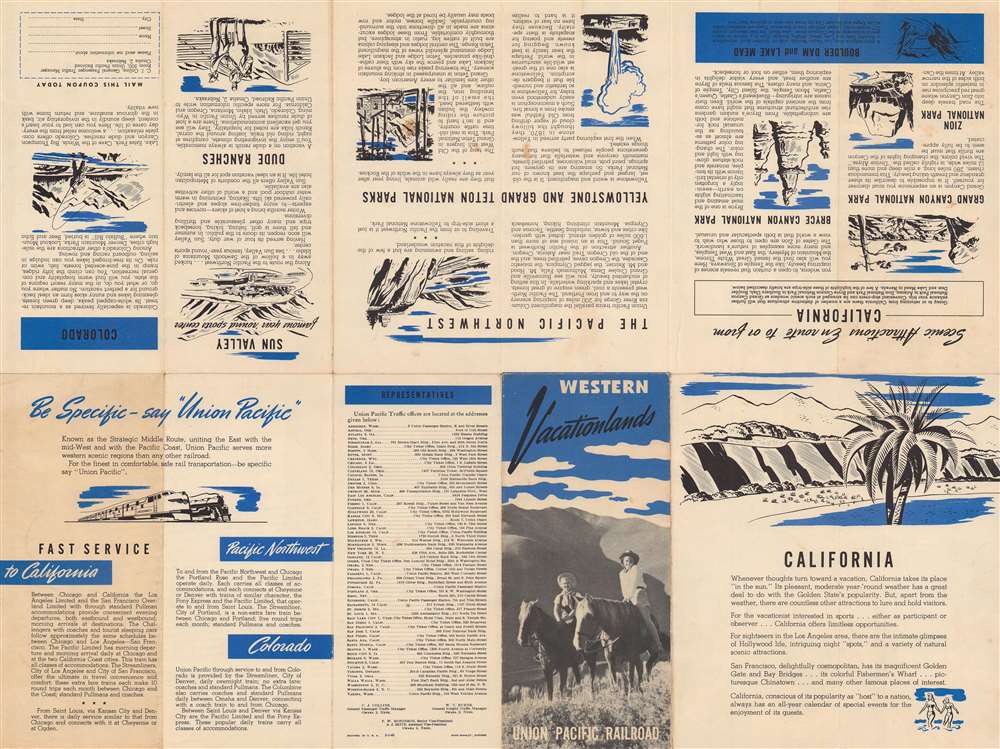 This map was drawn by William Willmarth and published in 1946 by Rand McNally for the Union Pacific Railroad. This is the only known cataloged example of the present edition. We note maps bearing the same or similar titles cataloged in OCLC, all of which were published after the present map.

William Andrew Willmarth (November 20, 1898 - October 3, 1984) was an American artist. Born in Chicago, Illinois, Willmarth served in the armed forces during World War I, possibly with the Merchant Marine. His family moved to Omaha, Nebraska, in 1920, where he worked at the Holland Furnace Company with his older brother Kenneth and his father Philip, who managed the company. The following year, Willmarth and his brother are both listed as commercial artists in the Omaha city directory. The Willmarths continued making commercial art through the 1920s, and William won second prize in a nationwide contest for the best Citizens' Military Training Camps poster in 1926. Throughout these years the majority of their work was signed simply as 'The Willmarths'. The Willmarths first produced work for the Union Pacific Railroad in 1930, when they designed the covers for two Union Pacific brochures promoting Yellowstone National Park. Willmarth began creating work for Union Pacific more regularly beginning in 1932, when two of his posters were selected as winners in a poster contest to promote travel in the western United States. He also designed one of the posters for President Roosevelt's 1934 'National Parks Year' campaign. Beginning in 1936, when the Chairman of the Union Pacific Railroad W. Averell Harriman opened his Sun Valley Resort in Idaho, the Willmarths began creating numerous promotional pieces for the resort, which was publicized as the first destination winter resort in the country. Both Willmarths created maps, posters, and other pieces promoting Sun Valley. During World War II, William and his brother created several pieces for the 'Keep 'Em Rolling' war posters series. Then in 1945, the brothers created a series of eleven paintings for Union Pacific, one for each Western state served by the Union Pacific. Known as the 'Your America' series, these works promoted a Union Pacific sponsored radio show of the same name and appeared as posters and print ads. They were even turned into a calendar and postcards. The Willmarths also created a series of magazine advertisements promoting the Union Pacific Streamliners from 1948 until 1950. William married Julia Morrison in April 1923. The couple had five children, three daughters and two sons. William and Julia moved to Tuscon, Arizona in 1958, where he likely retired from the commercial art business. However, he continued creating art for the rest of his life, even winning the 'color the bus' contest (meant to find a new color scheme for the city's buses) in Tuscon in 1976. Apparently, he entered 'for the fun of it'. Julia passed away on November 12, 1968, and William remarried on September 17, 1969, to Barbara Henderson. Learn More...