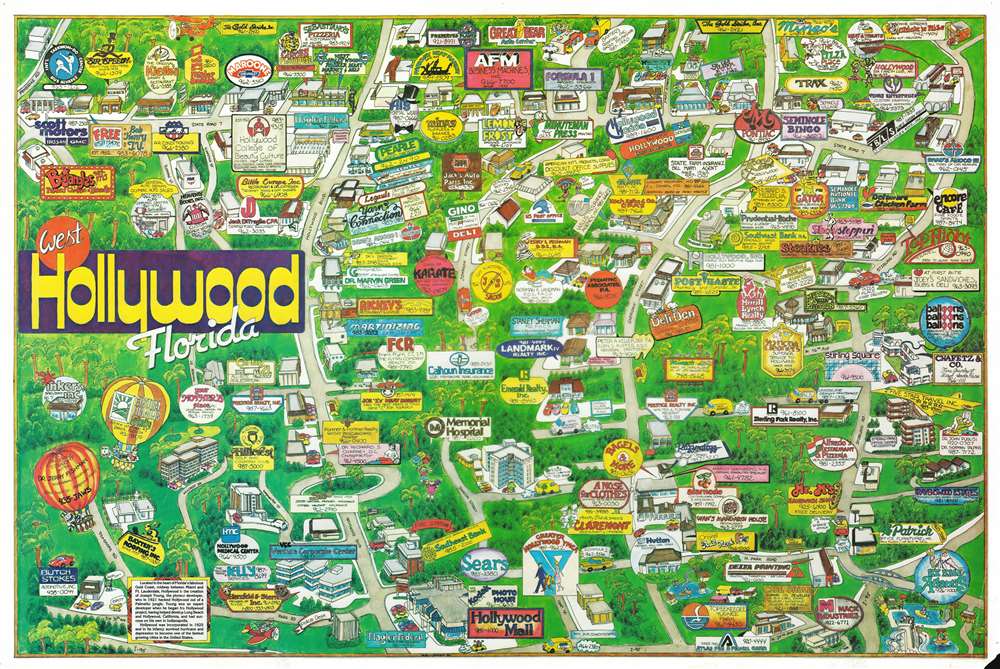 A bright and color pictorial map of West Hollywood, Florida.

This is a 1986 Robert Zell-Breier pictorial map of West Hollywood, California. Most likely meant as a promotional piece for the city, myriad businesses throughout the city are identified and range from the U.S. Post Office to hair salons, dry cleaners, auto centers, realtors, and Joe 'Z's' Meat Market. The now closed water park Six Flags Atlantis is situated in the lower right corner, while two hot air balloons, bearing advertisements of course, are illustrated in the lower left corner. Dentists, doctors, and hospitals are also promoted as are numerous banks and restaurants, including Gator Subs and Beverages and The Deli Den.

This map was drawn by Robert Zell-Breier and published in 1986. We have been unable to locate any other examples of this map and know that Mr. Zell-Breier's work was produced in small quantities.

Robert Zell-Breier (July 26, 1947 - April 7, 2010) was an American artist known for hand-drawn poster maps and montages. Zell-Breier attended the Newark School of Fine and Industrial Arts and the Maryland Art Institute.

Very good. Even overall toning. Light wear along margins. Blank on verso.
Looking for a high-resolution scan of this?