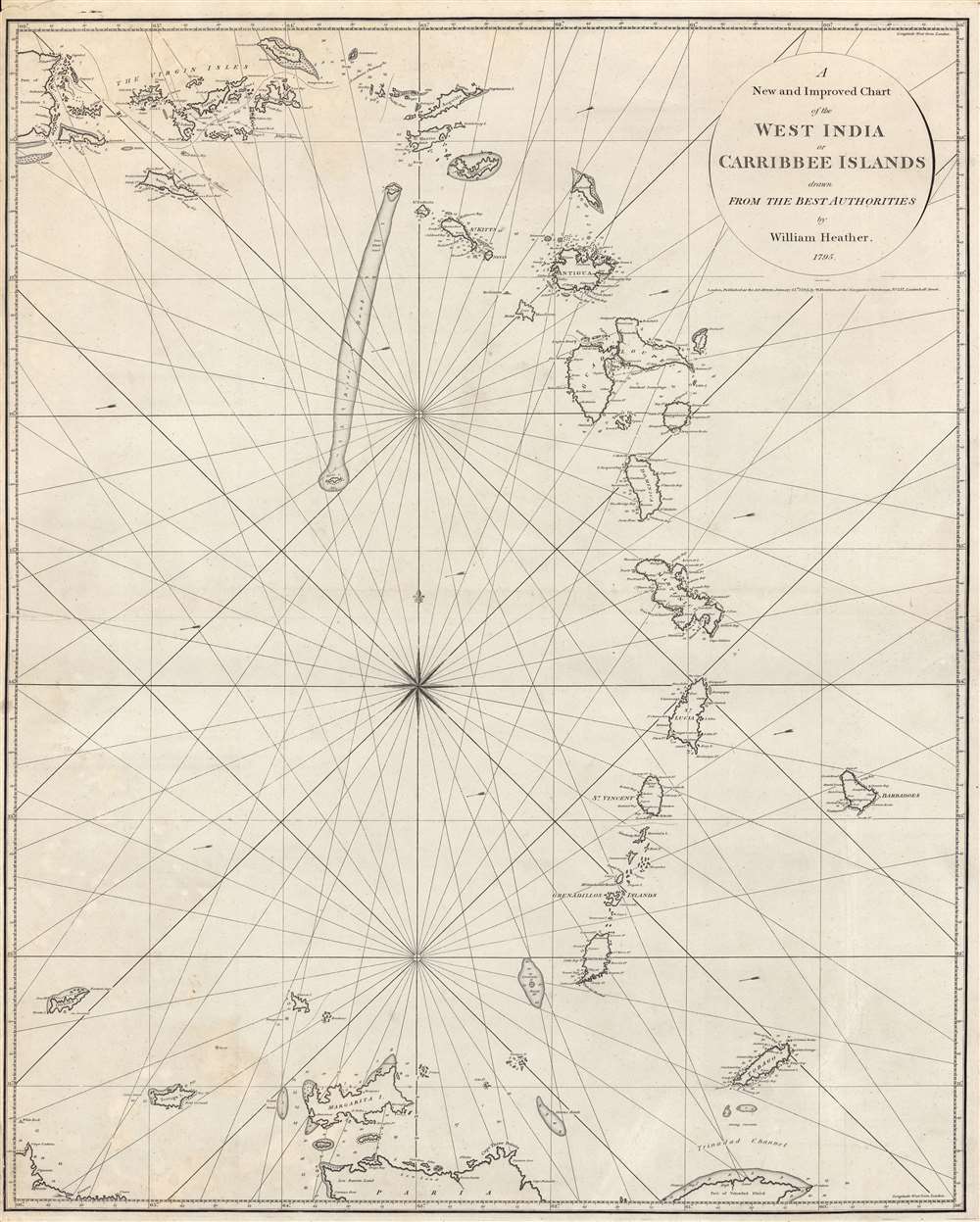 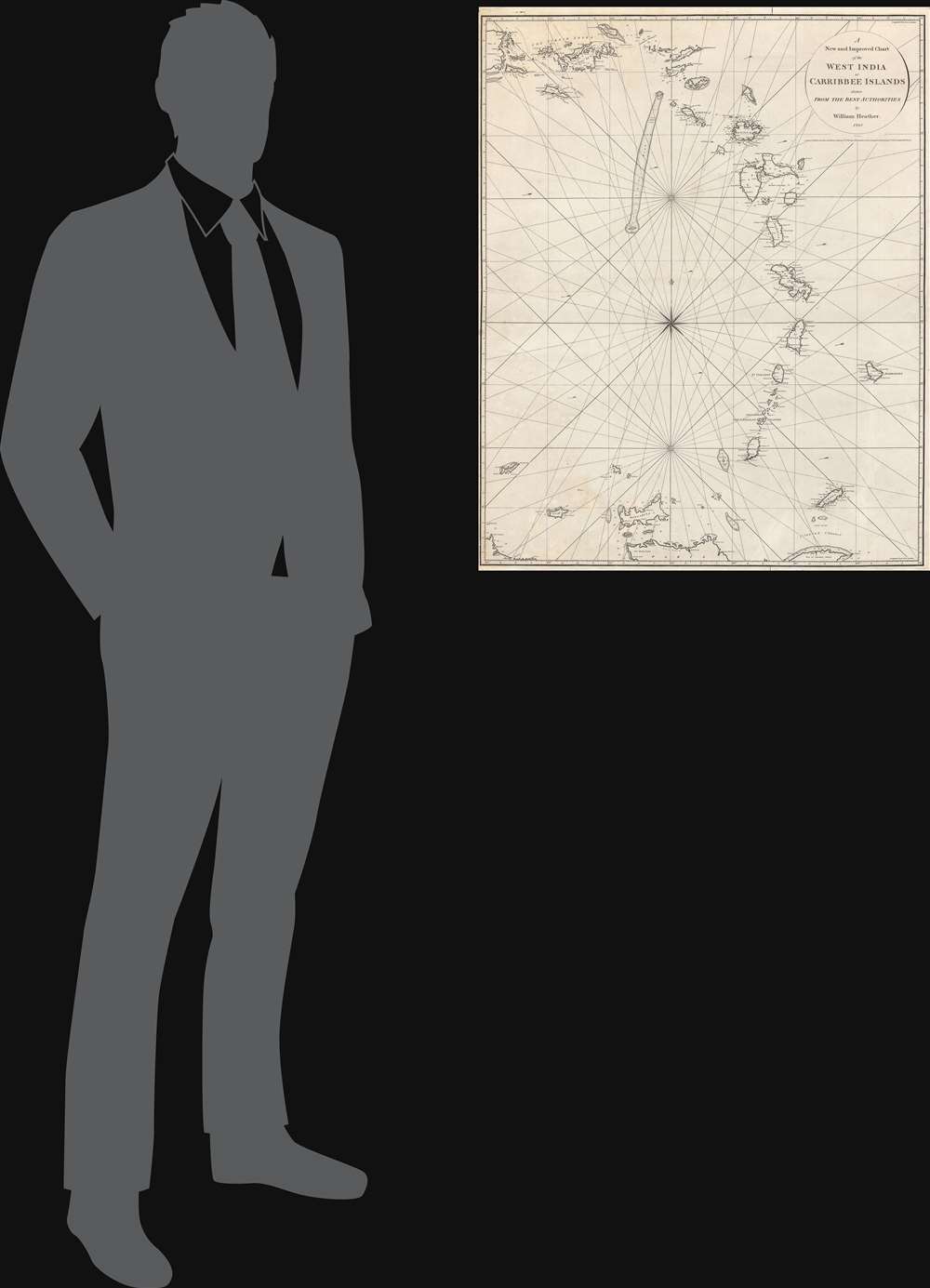 This is a rare early example of a blueback chart of the West Indies Windward Isles made in 1795 by William Heather, a pioneer in the genre. It focuses on the Lesser Antilles, often known in English as the Leeward and Windward Islands, towards the end of a period of near-constant warfare between European powers over control of the Caribbean.

Although it does not have a blue back, as would later become characteristic of the genre, this map is an early example of a blueback chart. It provides essential information for navigation, particularly among shallow coastal waters, banks, and reefs, where soundings are presented. Arrows show the direction of currents, namely the Antilles Current and Caribbean Current.

Piracy and Warfare in the Caribbean

This map dates from the latter part of a period of struggle lasting some three centuries between European powers (mainly the English/British, Dutch, French, and Spanish) over control of the Caribbean, a struggle that often saw the employment of privateers and pirates. Although much of the fighting took place on the open water (where improved hydrography such as reflected in this chart was a major advantage), control of the islands themselves was also critical, as they provided safe harbors and a source of cash crops (especially sugar). The Age of Revolutions and the Napoleonic Wars provided the context for the last major bout of naval warfare in these waters, after which many of the Spanish colonies became independent and British naval supremacy was established.

Blueback nautical charts began appearing in London in the late 18th century. Bluebacks, as they came to be called, were privately published large format nautical charts known for their distinctive blue paper backing. The backing, a commonly available blue manila paper traditionally used by publishers to wrap unbound pamphlets, was adopted as a practical way to reinforce the low-quality paper used by private chart publishers trying to cut costs. The earliest known blueback charts include a 1760 chart issued by Mount and Page, and a 1787 chart issued by Robert Sayer.

The tradition took off in the early 19th century, when British publishers like John Hamilton Moore, Robert Blachford, James Imray, William Heather, John William Norie, Charles Wilson, David Steel, R. H. Laurie, and John Hobbs, among others, rose to dominate the chart trade. Bluebacks became so popular that the convention was embraced by chartmakers outside of England, including Americans Edmund March Blunt and George Eldridge, as well as Scandinavian, French, German, Russian, and Spanish chartmakers. Blueback charts remained popular until the late 19th century, when government subsidized organizations like the British Admiralty Hydrographic Office and the United States Coast Survey began issuing their own superior charts on high quality paper that did not require reinforcement.

This chart was made by William Heather, engraved by John Stephenson, and printed at Navigation Warehouse (also known as Naval Warehouse) in Leadenhall Street, which Heather managed beginning the same year this chart was published. It is cataloged as being held by the Bibliothèque nationale de France and the Biblioteca Nacional de España, but is very scarce to the market.


John Stephenson (fl. c. 1790 - 1836) was a British engraver active in the London nautical chart trade in the late 19th and early 19th century. There is some speculation by Worms, Baynton-Williams, and other map scholars, that seem to suggest Stephenson apprenticed with the stationer Charles John Downes. Stephenson engraved for the nautical chart firm of John Hamilton Moore before moving on to the firm of William Heather in 1793. Heather's firm was subsequently inherited, along with Stephenson, by John William Noire. Stephenson's work is characterized by strong lines, elaborate decorative embellishment, and finely-engraved detail, it is commonly associated with John Noire. Learn More...