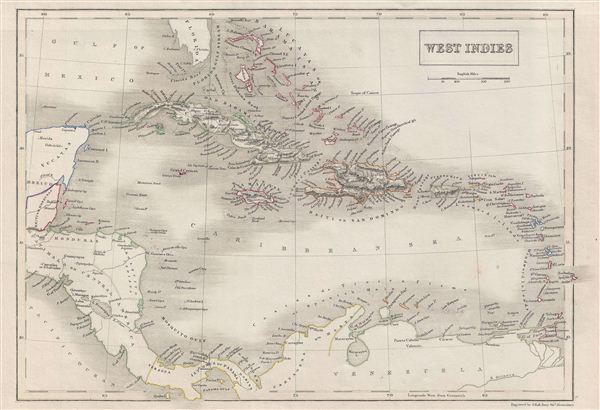 A fine example of Adam and Charles Black's 1840 map of West Indies. Centered on Hispaniola, the map covers the Caribbean from Florida to Venezuela and from Yucatan to the Lesser Antilles and Barbados. It includes the Bahamans, Cuba, Jamaica, Haiti and Santo Domingo (Hispaniola), Porto Rico, the Virgin Islands, the Leeward and Windward Islands and Trinidad and Tobago. It also shows parts of Guatemala, Venezuela and the Isthmus of Panama. The map also marks the Mosquito Gulf or the Bay of Mosquitoes, which is a corruption of the Moskito, its indigenous tribal inhabitants. This map was engraved by S. Hall for issue in the 1840 edition of Black's General Atlas.