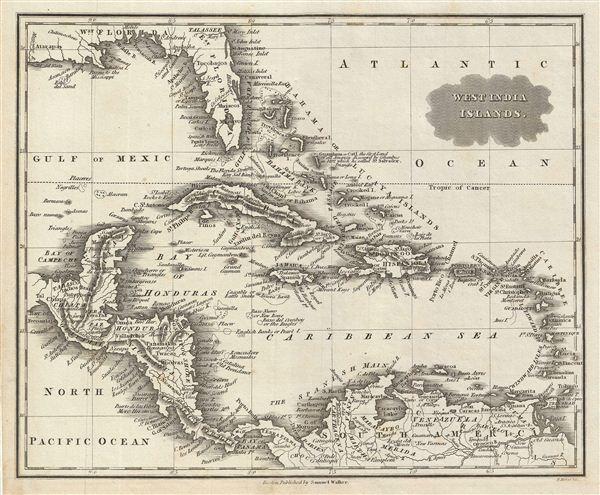 This is an attractive example of the 1828 Malte-Brun map of the West Indies. Centered on Santo Domingo (Hispaniola), the map covers from Florida and the Bahamas south through the Caribbean islands of Cuba and Hispaniola south as far as Panama Bay and the Spanish Main and east to the Caribbean Islands or the Lesser Antilles. The Bahamas (Bahama or Lucaya Islands), Honduras, the Panama Bay, Guatemala, Nicaragua, and part of Mexico are also included. The map identifies the island of Guamhana or Cat Island, in the Bahamas as 'The first Land of all America discovered by Columbus in 1492 which he called St. Salvador,' the site where Columbus supposedly landed on October 12 of 1492. Various, important rivers, islands, cities and other topographical details are noted. This map was published by Samuel Walker in 1828 as part of the American edition of Conrad Malte-Brun's System of Geography, Vol. I.