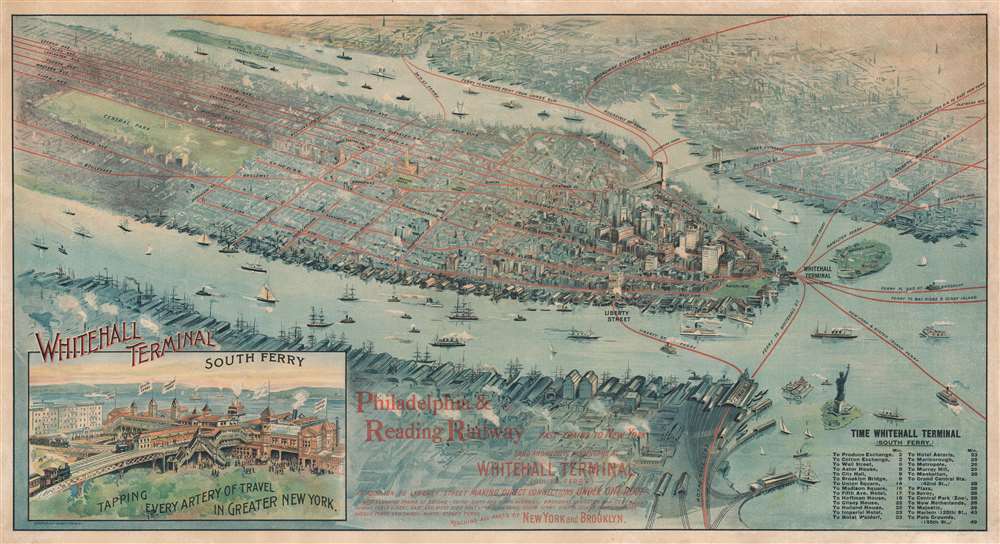 This is a striking and rare 1897 Gray Lithographing Company chromolithograph bird's-eye view map of Manhattan, New York City, focusing on ferry and rail lines. Red lines mark ferry routes between Whitehall Terminal (South Ferry) and Jersey City and several locations in Brooklyn. Each route is labeled by its destination. In Manhattan and in Brooklyn, similar red lines highlight elevated railway lines. Ships of all kinds appear in the Hudson and East Rivers, underscoring the importance of New York as a major seaport. An inset in the lower left contains an illustration of Whitehall Terminal, with several elevated rail lines. New York Harbor is busy with maritime traffic.

As this is a bird's-eye view, numerous landmarks are pictorially illustrated. Among these are the Brooklyn Bridge, the Statue of Liberty, the Metropolitan Museum of Art, and the Obelisk (also known as Cleopatra's Needle), both of which are located within Central Park. Buildings in the Financial District are depicted in detail, as are wharves and piers along New York's waterfront.

The first organized steam ferry between New York and Brooklyn began running in 1814 and was operated by the Fulton Ferry Company. Eventually, the streets at either end of the route were renamed 'Fulton Street'. The South Ferry Company, which connected Lower Manhattan with the foot of Atlantic Avenue in Brooklyn, was established on May 16, 1836. The Brooklyn and Jamaica Railroad had just started operation as well, now the Atlantic Branch of the Long Island Rail Road. Several elevated railroad lines serviced the ferry terminal, allowing travelers a convenient way to travel between the two cities.

Whitehall Terminal emerged from two similar events. In the late 19th century, ferry use began to decline because of the popularity of the Brooklyn Bridge. Also, after a deadly ferry sinking on June 14, 1901, New York City used the accident to acquire all the ferry lines to Staten Island. This acquisition ended private ferry service in New York City. Ferries operating under the Department of Docks and Ferries began running on October 25, 1905, seven years after the consolidation of the five boroughs into New York City. The acquisition also led to the construction of a new terminal, which was completed in 1909. A fire at the South Ferry elevated train station in 1919 damaged slips 1 and 2. The terminal was rebuilt between 1953 and 1956. After another fire gutted the terminal in 1991, a completely new terminal, which opened in 2005, was built.

The Bird's-Eye view industry emerged in the United States in the middle part of the 19th century and coincided with the commercial development of lithographic printing. Before the rise of lithography, the ability to own and display artwork in the home was largely limited to the extremely wealthy, but the advent of lithographic printing made it possible for everyone to own visually striking artwork. A robust trade developed in portraits of political leaders, allegorical and religious images, and city views.

City views were being produced in the United States as early as the 1830s, but the genre exploded after the American Civil War (1861 - 1865). Bridging the gap between maps and pictures, most 19th century American bird's-eye views presented cities to the public from highpoints. Some were imagined, but others were drawn from hot-air balloons or nearby hills. The presentation, combining high elevation, commercial interest, and new printing technology created a uniquely American artform, as described by historian Donald Karshan,

The vogue for bird's-eye city views lasted from about 1845 to 1920, during which period some 2,400 cities were thus portrayed, some multiple times. Although views were produced in many urban centers, the nexus of view production in the United States was Milwaukee, Wisconsin. The major American viewmakers were Stoner, Wellge, Bailey, Fowler, Hill Ruger, Koch, Burleigh, Norris, and Morse, among others.

This map was created and published by the Gray Lithographing Company in 1897. This is the only known cataloged example. This view does not appear in John Rep's Views and Viewmakers of Urban America.

Very good. Full professional restoration.
Looking for a high-resolution scan of this?