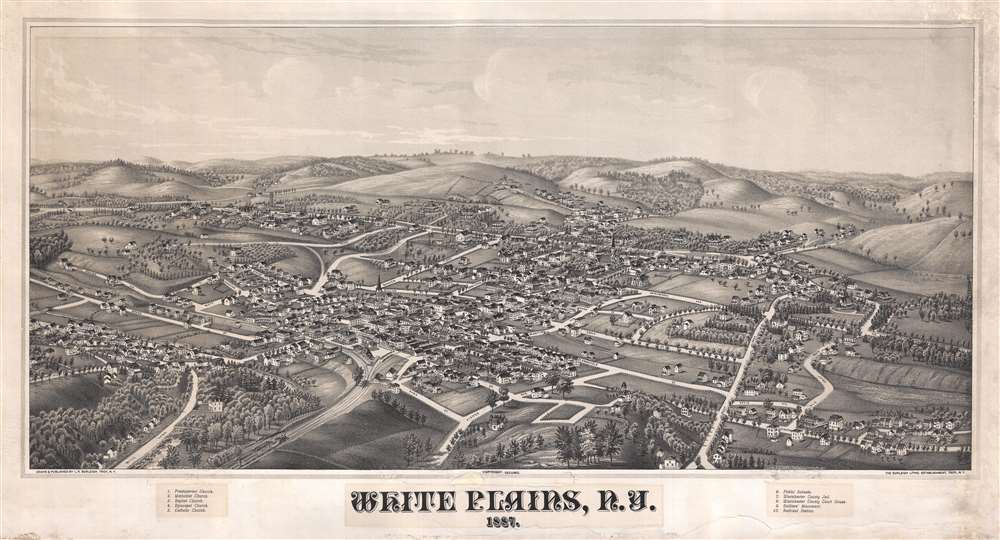 A fine example of Lucian Burleigh's extremely rare 1887 view of White Plains, New York. The map is oriented with the top of the paper oriented to the northeast. It extends from Kensico Street (Now S. Kenisco Ave) to the conjunction of Banks Street and Fisher Avenue, and from the Bronx River to Old Post Road (Maple Ave). The viewpoint is from a low perspective somewhat southwest of the city. In an unusual exception to Burleigh's style, which restricts presentation to buildings and landscapes, and does not include people, animals, or carriages, the present map features a train entering the city form the southwest. Streets are labeled directly and important buildings are identified numerically via a key in the lower margin. The view identifies 5 churches, public schools, the County Jail and Courthouse, a soldier's monument, and the railroad station.

During the great age of American viewmaking only two views of New York City were produced, the presently offered view by Burleigh and a later view issued in 1901 by Hughes. Both are extremely rare. This present view, by Burleigh, is known in only two other examples, one housed at the Library of Congress, and a second in the archive of the Pennsylvania State University. This the only example known in private hands.

Very good. Professionally cleaned and backed on linen. Some restoration and acid discoloration around title and long bottom of margin. Some spotty soiling in margins.

Reps, John, Views and Viewmakers of Urban America (University of Missour, Columbia, 1984), #2984.
Looking for a high-resolution scan of this?