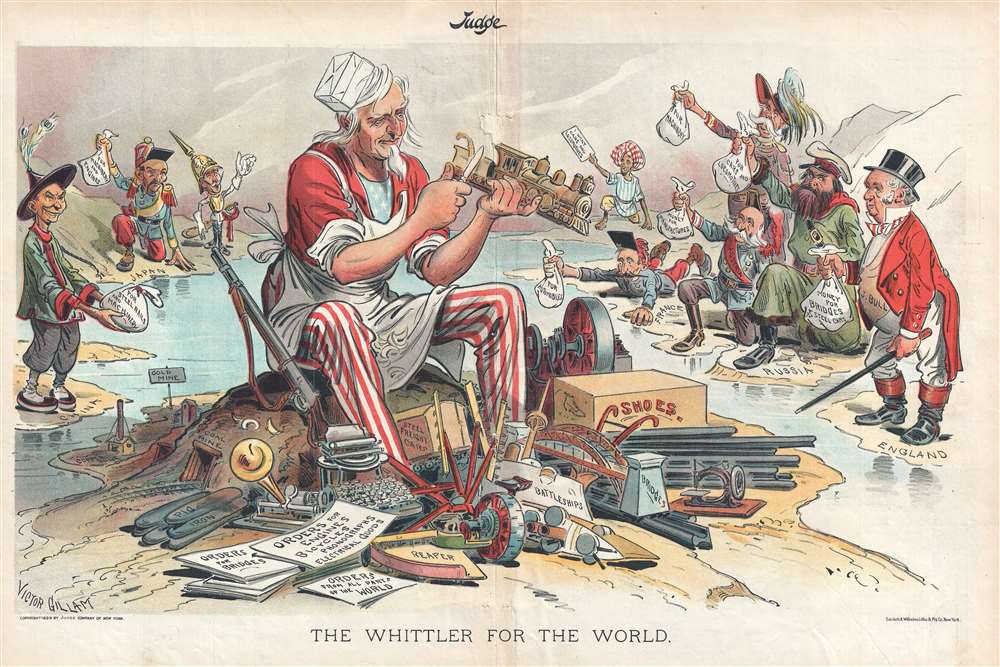 This is an 1899 Victor Gillam political cartoon highlighting the rise of the United States into a net exporter of manufactured goods. The cartoon depicts Uncle Sam at center, seated on a coal mine on an island, whittling a locomotive. The leaders of the rest of the world, including Italy, Russia, Japan, China, Austria, France, and England, surround him on the shores of both oceans holding bags of money (presumably gold) and clamoring to purchase American built manufactured goods. Orders for engines, bridges, phonographs, and other manufactured goods lie at Uncle Sam's feet, while steel rails, engines, locomotives, steel freight cars, reapers, and typewriters crowd the ground around his feet, waiting to be sent to their eager recipients.

Between 1895 and 1900, the volume American exports of manufactured goods rose a shocking ninety percent, which equates for roughly $280 million. Dubbed the 'American Commercial Invasion' in Europe, several factors led to this drastic increase in production, but none played a bigger role than the growth of American steel exports. Gillam definitely highlights this, as steel rails for railroads, steel freight cars, battleships, and locomotives are among the products he highlights in this cartoon.

This cartoon was drawn by Victor Gillam and published in the July 1, 1899 issue of Judge. This is a rare find of the market and we have been able to locate only one example in an institutional collection at the Library of Congress.

Gillam, V. 'The Whittler for the World.' Judge Vo. 37 No. 924, July 1, 1899 (New York: Judge Publishing Company).     Judge (1881 - 1947) was a weekly satirical magazine published in the United States. The first issue was first printed on October 29, 1881 and was only sixteen pages long. Judge was launched by James Albert Wales, Frank Tousey, and George H. Jessop, who had previously worked for its rival magazine Puck. In the mid-1880s, William J. Arkell purchased the magazine, which was having difficulty competing with Puck. Arkell, taking advantage of his considerable wealth, persuaded cartoonists Eugene Zimmermann and Bernhard Gillam to leave Puck and join the staff at Judge. As Arkell was a supporter of the Republican Party, Judge soon became a platform for criticizing the Democratic administration of Grover Cleveland, which was blamed for the Panic of 1893, among other issues. With support from the Republican Party, Judge saw a rise in popularity during the 1880s and 90s, surpassing Puck in both content and circulation. Judge also widely supported the candidacy of William McKinley, largely through the work of cartoonists Victor Gillam and Grant E. Hamilton. Judge reached its peak circulation of around 100,000 by 1912. One of its former editors, Harold Ross, used his experience at the magazine to launch his own publication, The New Yorker in 1925, which quickly began to compete with Judge. Due to the success of The New Yorker and the Great Depression, Judge became a monthly is 1932 and ceased circulation in 1947.