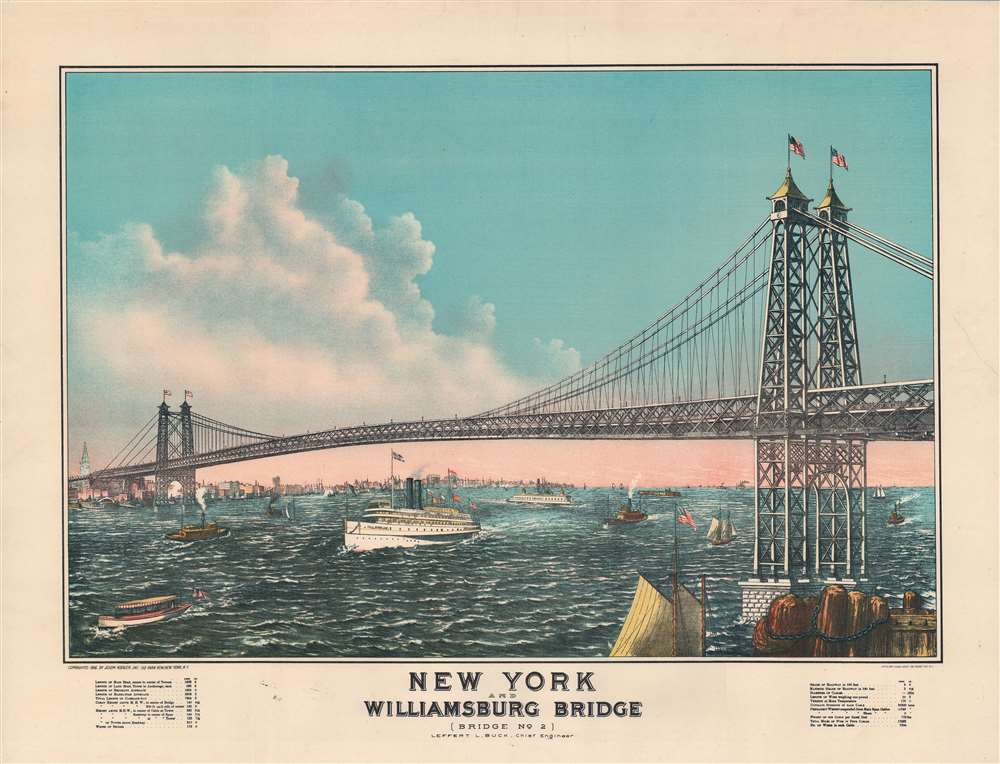 An extremely rare 1916 chromolithograph view of the Williamsburg Bridge. The view looks on the bridge from a dock in Brooklyn, near Broadway. The Manhattan skyline is evident in the background. The present example is the second edition, updated to include the distinctive Met Life Tower at far left, thus embracing two world records - the tallest building and longest suspension bridge. In the foreground, the Fall River Line steamer Priscilla heads inbount from Boston. At the time, Priscilla was the largest side-wheeler afloat, capable of accommodating 1,500 passengers. Behind, another steam ferry, Oregon, run by the Brooklyn and New-York Ferry Company, crosses the East River towards Brooklyn

The Williamsburg Bridge is the second bridge (after the Brooklyn Bridge) to cross the East River between Brooklyn and lower Manhattan. The bridge was constructed between 1896 and 1903, when it opened as the world's longest suspension bridge - a title it retained until 1924. The bridge was designed by Leffert L. Buck (chief engineer) and Henry Hornbostel (architect). The structure is unique among suspension bridges in having its main span hanging from cables in the usual manner but its side spans being supported entirely by their trusswork. Initially the Williamsburg Bridge was intended as a pedestrian, trolley, and railway bridge. In 1932 it was partially converted to accommodate vehicular traffic, but it remains a railroad bridge serving the J/Z and M Subway line.

This view was first published in 1903. It was drawn and lithographed by Charles Hart, and published by Joseph Koehler. The present 1916 edition was issued with minor revisions to include a new sky and the Met Life Tower, constructed in 1909. The 1916 edition also has a more vivid color palette. Koehler filed the copyright for this view on February 19, 1916. We note several examples of the 1903 first edition at the New York Public Library, New York Historical Society, and the Library of Congress. However, this is the only known example of the 1916 edition.

Joseph Koehler (1842 - May 22, 1933) was a New York based lithographer, printer, and stationer active in the late 19th and early 20th century. Koehler was born in near Reims, France, the son of a prominent medical doctor, also Joseph Koehler, once the personal physician to Napoleon Bonaparte. In 1846, when he was just 4, Koehler immigrated to the United States with his family, settling in New York City. He is tentatively credited with the invention of the 'greeting card' in 1867, when he was 21. Following on the success of his greeting card business, Koehler built an extensive postcard and calling card business, which today represents the bulk of his surviving corpus. Most of his pieces were printed at factories in Germany, France, and England. Later, in the 1890s, he established his own steam press operation at 150 Park Row - then a printing hub. Koehler, while a pioneer in half-tone printing, is better known for retaining the more labor-intensive chromolithographic process well into early 20th century due to its superior graphic effect. Most scholarship suggests he retired around 1914, but we have seen later work attributed to his firm dating to 1916, so this may be erroneous. In addition to his printing work, Koehler also imported tobacco and smoking paraphernalia. He also inherited the formula for a medicinal cure-all balm developed by his father, which he marketed as 'Arabian Balsam'. Learn More...


Charles Hart (March 10, 1824 - October 9, 1914) was a pioneering British-American lithographer active in New York from the mid-19th century to the early 20th century. Hart was born in London and immigrated to New York as a child. He briefly worked in a glassware shop before, in 1939, becoming an lithographer's apprentice under George Endicott (June 14, 1802 - 1848). Five years later in 1844 is graduated from his apprenticeship, joined the fully-paid staff of Endicott Lithography. He must have been greatly appreciated within the firm, as in 1850, his salary of 20 USD a week was among the highest in the trade. When the Endicott offices burnt to the ground in 1859, Hart moved to the firm of Robertson, Siebert and Shearman. When this partnership collapsed in 1861, Hart partnered with James Alpheus Sherman (1816 - 1890), creating the firm 'Shearman and Hart.' Shearman left the firm to peruse a legal career shortly thereafter and from this point forward, Hart published independently. Hart retired from active lithography in 1911, when his sons, Francis and Horace Hart, took over. He died in 1914. Learn More...

Very good. Laid on linen.
Looking for a high-resolution scan of this?