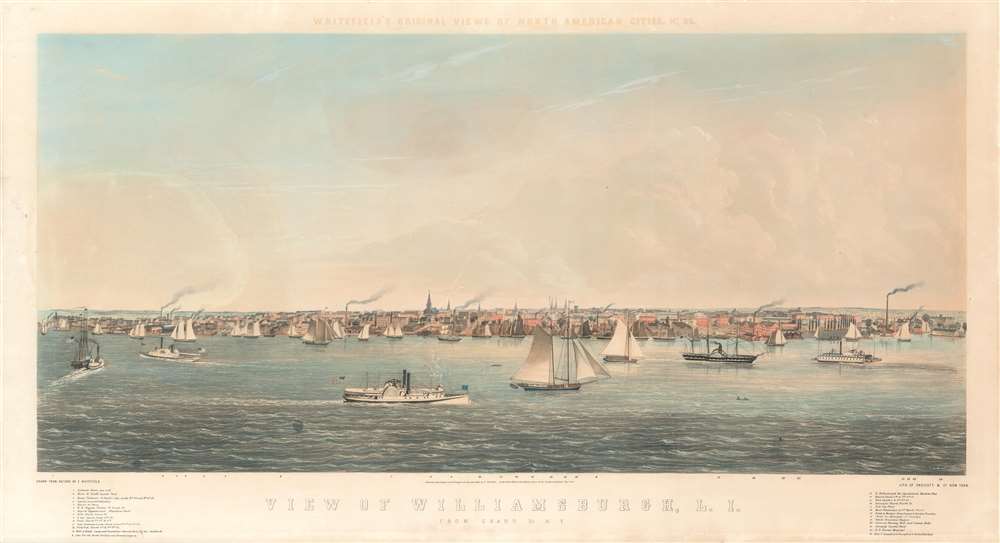 A beautiful and rare low oblique city view of Williamsburg, Brooklyn, in 1852. The view is the work of the English-American artist Edwin Whitefield. When this view was issued, Williamsburg was an independent city, separate from the adjacent cities of Brooklyn and Bushwick. Williamsburg, Greenpoint and Bushwick were annexed into Brooklyn in 1854, two years after this view was drawn, turning Brooklyn into the second largest city in the United States - after neighboring New York. Whitefield's view reveals a bustling waterfront, with numerous paddlewheel steamships in the foreground. He employs a numeric key to identify several important businesses and buildings, among them 'Meyer and Poppenhusen's Whalebone Factory, various lumberyards, shipyards, and mills, the Cogswell and Crane Distillery, several churches, Tuttle and Bailey's Manufactory and Garden Foundry, the U. S. Naval Hospital, and more.

In the years prior to World War II, Williamsburg became a center for Jewish migration. This trend only increased in the 1940s and 1950s, when refuges and Holocaust survivors flooded into Williamsburg from Hungary and Romania. Williamsburg rapidly become the largest Jewish community outside of Israel. From about 1990, Williamsburg north of Broadway became a center of gentrification and art-culture. Drawn by proximity to Manhattan, large loft spaces, and low rents, Williamsburg was flooded by artists and scrappy alternative-culture youth. This ultimately led to skyrocketing real-estate prices and large-scale gentrification. Nonetheless, Williamsburg remains a haven for artists and other creatives, and is considered New York City's most interesting, diverse, and vibrant neighborhoods. The southern part of Williamsburg remains a conservative Jewish enclave.

This view was published by Isaac Prindle of Brooklyn and engraved and printed by Endicott and Company of New York based upon Whitefield's original artwork. It is view no. 26 in Whitefield's Original Views of North American Cities, a loose leaf issued on a subscription basis. This view is quite rare. We are aware of examples at the New York Public Library and at the New York City Historical Society.

Edwin Whitefield Pennie (September 22, 1816 - December 26, 1892) was an English-American landscape painter active in the middle part of the 19th century. Whitefield was born in East Lulworth, England, the son of a Dorset schoolmaster. He emigrated to America, probably Canada, in 1835, leaving his first wife (Maria) and son in England. Some speculate that the move may been motivated by unwanted pressure from his family to embrace onerous medical or legal work. He taught school in Canada, and there married again, taking a second wife, Kate, who was probably one of his students. Seeking to develop as an artist, he moved to the United States around 1837 or 1838, establishing himself as an itinerant traveler/artist/journalist. He travelled up and down the Hudson, creating views of various American cities along the river, doing commission work, and selling lithographs of his work by subscription. This turned into a series of views of North American cities, of which there were at least 37, possibly more. Among the cities in his portfolio are views of Brooklyn, Toronto, Quebec City, Montreal, Ithaca, Jamestown, Poughkeepsie, Williamsburg (Brooklyn), Niagara, Philadelphia, Salem, Albany, and Boston, among many others. He separated from Kate, his Canadian wife, in 1853. Whitefield moved to Minnesota in 1856, settling in Kandotta with a new wife, Lillian, to engaged in land speculation. He had some success there, where Whitefield township, established in 1870, was named after him. Nearby Lake Lillian is named after his third American wife. He briefly lived in Chicago around 1861, before moving to Reading, Massachusetts in 1863 to paint the historic homes of New England, a project that he obsessed over until 1889, when the three-volume Homes of our Forefathers was finally published. In addition to his views, Whitefield is said to have published maps (we have not identified any), playing cards, and patented the Notosericum embroidery stamping technique. Whitefield returned to England in 1888, but returned to Massachusetts in 1892, settling in Roslindale, then in Dedham, where he died.

Good. Some matte burn in margins. There is an area of damage at center which has been reinforced on verso.