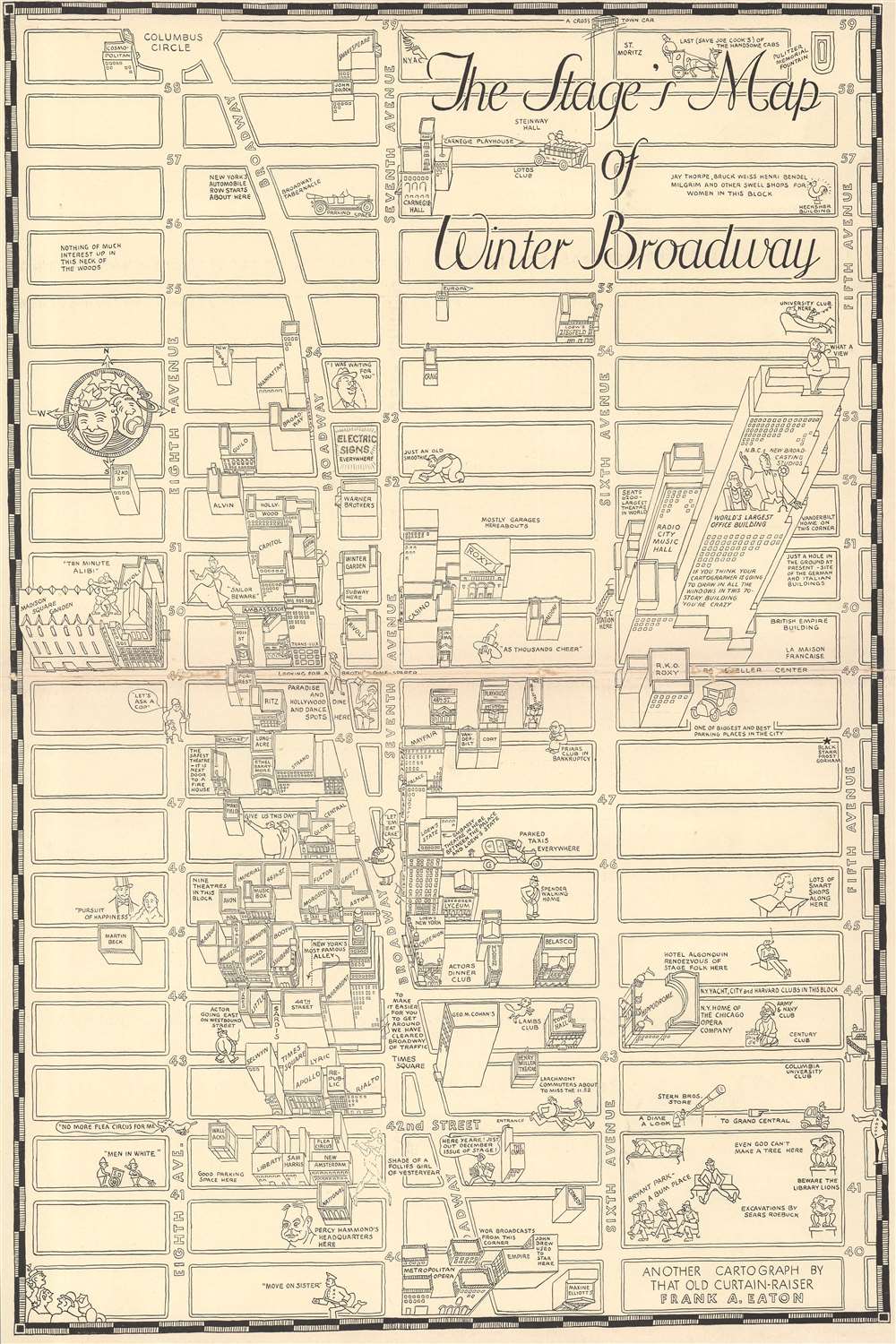 This is a 1933 Frank Eaton pictorial map of the Theater District in New York City. Encompassing from Eighth Avenue to Fifth Avenue and from 59th Street and Columbus Circle to 40th Street, the map features perspective illustrations of the district's theaters. The Winter Garden, Roxy, Apollo, Rialto, Music Box, Lyric, and New Amsterdam appear, along with numerous others. Buildings depicted are almost exclusively theaters, although Patience and Fortitude (the lion's standing sentinel in front of the New York Public Library Stephen A. Schwarzman Building) do appear in Bryant Park. Rockefeller Center and Radio City Music Hall (Radio City is a theater - the largest in the world in 1933 per the map - but it isn't a Broadway theater) dominate the map's right side. Comedic portraits of the district's visitors and entertainers are included as well. Humorous comments, such as 'If you think your cartographer is going to draw in all the windows in this 70-story building you're crazy', provide levity.

This map was created by Frank Eaton and published in the December 1933 edition of Stage Magazine. We note a single separate example in OCLC at the Osher Map Library at the University of Southern Maine. Examples of this map have only started appearing on the market recently, suggesting that in the past its charms have gone unrecognized.

Frank Adair Eaton (January 23, 1887 - July 27, 1944) was a Canadian artist active in the newspaper, magazine, and advertising industry. Eaton worked as the rotogravure editor of the New York Tribune, until he left in 1924 when he became vice president of Underwood and Underwood. Then, he worked in the magazine industry from 1926 until 1942, when he was he was art director and managing editor for Stage magazine and then Art Editor at Cue magazine. He became advertising-publicity director for Pathe News in 1942. He married Helen McSweeney on February 2, 1921, with whom he had one child. Learn More...

Very good. Wear and light toning along original centerfold. Areas of infill along centerfold where once bound into original magazine. Text on verso. Close margins.