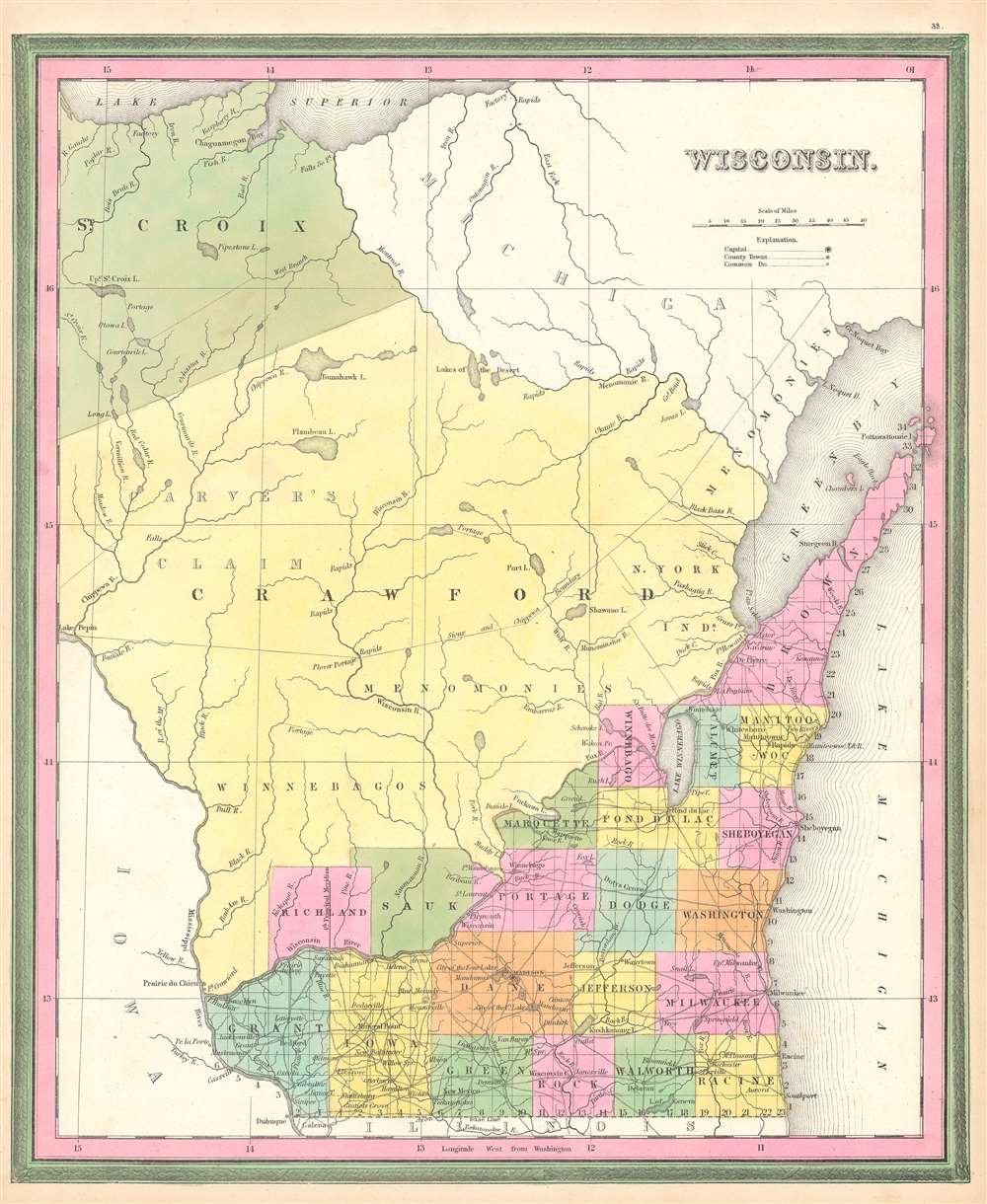 This is a first edition 1846 Samuel Augustus Mitchell map of Florida. The map depicts the region from Lake Pepin to Lake Michigan and from Lake Superior to Illinois and Iowa. At this point in American history, Wisconsin was still a territory and would not be granted statehood until May 29, 1848, over two years after this map was published. Here, only the southeastern portion of Wisconsin is illustrated as having been divided into counties and surveyed. The familiar grid of the Public Land Survey System divides this portion of the territory, while the rest of the territory remains unsurveyed. Counties are labeled and shaded different colors to allow for easy differentiation. Cities and towns are identified, including Madison, Milwaukee, and Sheboygan. Crawford and St. Croix Counties occupy the vast majority of the territory. Crawford County was one of Wisconsin's original counties and originally covered the western half of present-day Wisconsin. It was transferred from Michigan to the newly formed Wisconsin Territory as the former prepared for statehood and was slowly divided until it reached its current size.

Jonathan Carver (April 13, 171 - January 31, 1780) was a British explorer of colonial America and writer. Carver became the first English-speaking explorer to travel through modern-day Wisconsin when he arrived in the area in 1766. He spent from 1766 - 1767 exploring the territory and developed great relationships with the Indians. Carver returned to England in 1769 hoping to recover the costs of his expedition. Unfortunately he was never able to do so, even though he believed that he had been legitimately hired by the Crown to conduct his exploration. He died in poverty in 1780, but managed to write a bestseller before his death, Travels through the Interior Parts of North America. It was not until the third edition of his book was published in 1781 that the idea of 'Carver's Claim' first appeared. His editor included a comment in the book that they had seen a deed supposedly dated at the 'Great Cave, May the 1st, 1767', that granted Carver and his family 'the whole of a certain tract or territory of land'. Per this description, the claim encompassed some 10,000 square miles of territory. One problem existed, however: the deed had vanished after the death of Carver's widow.

Undeterred, Carver's heirs hired Rev. Samuel Peters (1735 - 1825), a Connecticut Loyalist who had fled to England at the start of the American Revolution, to track down the deed. Peters would, of course, be compensated in land once he found the deed. He was never successful in locating the deed, but still decided to return to the United States to petition Congress to honor the claim. After years of unsuccessfully badgering Congressmen, and the War of 1812, Congress decided that Peters needed the Sioux to verify the deed's existence and its terms. Two separate expeditions set out in 1817 to consult the Sioux. One, made up of two of Carver's grandsons, successfully met with Sioux elders, who told them that the chiefs who supposedly signed the deed never existed. The second, of which the 83-year-old Rev. Peters was a member, never encounted the Sioux after being held up for months at Prairie du Chien. Finally, on January 29, 1823, Congress stated that Peters and Carver's heirs had no claim to the land. They argued that English law at the time of the supposed deed prohibited land grants to private individuals. Plus, they added, Carver had never made any claims to the land while he was alive.

This map was first published by Henry Schenck Tanner in 1842 and Carver's Claim was shaded a different color to make it stand out. It was subsequently published by Carey and Hart after their acquisition of the Tanner printing plates with the addition of the green border around Tanner's pink border and engraved by Burroughs. It was then published by Samuel Augustus Mitchell with the Carey and Hart border after removing Burrough's imprint from the bottom border as page thirty-three in the 1846 edition of his A New Universal Atlas. A subsequent 1846 edition was published by Mitchell featuring his trademark border and we believe no other changes. The 1848 edition is the first time that significant changes to the plate are noticeable.


Henry Schenck Tanner (1786 - May 18, 1858) was one of the preeminent American map engravers and publishers of the early 19th century - what is considered to be the "Golden Age of American Map Publishing". Born in New York City but based in Philadelphia, Tanner's forty plus year career was almost entirely focused on cartographic work. His earliest map work appears in conjunction with another important map publisher, John Melish. Early in his career, Tanner partnered with his brother Benjamin, to engrave extensively for Melish as well as other Philadelphia publishers including Lucas Fielding (Baltimore), A. Bourne, Jason Torey, Samuel Harrison, and Samuel Lewis, among others. In 1818 Tanner convinced his fellow publishers and partners to finance the compilation of a New American Atlas. The atlas was sold by subscription and slowly emerged between 1819 and 1823. The New American Atlas, possibly the pinnacle of 19th century American cartography and was commended in its day as "one of the most splendid works of the kind ever executed in this country". It was subsequently republished in several updated editions until about 1839. Tanner had by this time become the most active and influential map publisher in the United States. Around 1832, recognizing the market for a less cost prohibitive atlas, Tanner began work on the smaller format New Universal Atlas. This popular and important atlas went through numerous editions before being bought out by Carey and Hart, and then, in 1846, by S. A. Mitchell, who would rise to become the preeminent publisher of the next generation. In addition to these important atlases, Tanner also issued numerous extremely important and influential travelers guides, state maps, wall maps, and pocket maps. He should not be confused with his brother, also an America map engraver, the New Yorker Benjamin Tanner. Learn More...

Very good. Even overall toning. Close left margin. Blank on verso.
Looking for a high-resolution scan of this?